In a city already on edge from the mass shooting, people grew concerned when they saw large plumes of smoke in Las Vegas on October 9 that clearly came from a fire.

Although some believed the blaze was situated in a Wynn property, the Encore, that wasn’t the case. The Las Vegas Fire Department said on Twitter that the fire derived from plastic pipes burning near a warehouse on Desert Inn Road. The warehouse itself was not burning, according to the Fire Department.

There’s a massive fire on this side of town in Las Vegas pic.twitter.com/c759tZ8KmM

“F3H 3230 W Desert Inn Rd plastic pipes outside behind warehouse, warehouse not involved, just plastic outside, water on fire, lots of smoke,” the fire department wrote. The fire was just west of the Las Vegas strip.

Here’s the actual tweet from the Las Vegas Fire and Rescue:

It appeared that the blaze was coming under control quickly.

#LasVegas fire out in under 20 minute. #applause #firefighters pic.twitter.com/ECmfnM7wF3

The plumes of smoke, which were widely visible, caused understandable fear among some people on social media as the city is still reeling and recovering from the horrific mass shooting attack by Stephen Paddock on innocent concert-goers. However, the smoke and fire on October 9 did not appear to be endangering any people’s lives.

Traffic was at a standstill, and people stood on a freeway overpass trying to see what was going on.

Here’s a closer glimpse of the blaze.

Some people said that it was a warehouse fire; that was partly true as it was near a warehouse. But it wasn’t actually in it.

I know people in Las Vegas are nervous. I just heard from metro it’s a warehouse fire. Nothing to worry about. pic.twitter.com/rKJfeO8e7T

People captured the clearly visible smoke plumes from their cars.

Here’s another view of the blaze.

Something's on fire on or near the Las Vegas strip and I don't think it's the slots or tables! pic.twitter.com/V5G6TqwFK8

Some people thought the fire was near other prominent properties, and it was tough to tell from a distance what the smoke was emanating from exactly, raising more concern.

In nearby California, a series of wildfires was having serious consequence, as deaths are now being reported. Those fires – there are several – are focused in the wine country area of Napa Valley. You can see the location of those fires here: 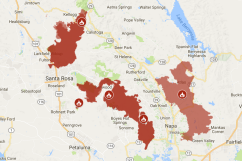