Getty Antoinette Cannon, a trauma nurse who treated victims of the Las Vegas concert shooting, leaves a rose at a white cross during a memorial on October 6.

The GoFundMe account established by Clark County Commission Chair Steve Sisolak and Clark County Sheriff Joseph Lombardo has raised over $10 million to help the victims and families impacted by the Las Vegas concert shooting. The shooting on the night of Sunday, October 1 was the deadliest mass shooting in modern U.S. history, with 58 people killed and nearly 500 others injured.

To donate to the Las Vegas Victims’ Fund, click here. In the seven days since the shooting, the fund has raised nearly $10.3 million from over 83,000 donors. The goal has climbed to $15 million as people continue to donate. The largest single donation came from Jim Murren and MGM Resorts International, who donated $3 million. The NFL’s Oakland Raiders, who are moving to Las Vegas next season, donated $50,000, while American DJ Diplo donated $100,000. Businessman Stephen J. Cloobeck also donated $400,000.

The money “has been donated by generous people around the country that… care about what we’re doing,” Sisolak, who is running for Nevada governor, said during a press conference the day after the shooting, CNN reports. “The hate that this one individual, this lone wolf, rained down on our community and on the MGM Village park was met with an outpouring of love by our entire community. And we will get through this together.”

Las Vegas Now reports that officials are still trying to figure out how best to distribute the funds. During a county commission meeting on Wednesday, members talked about using the National Center for Victims of Crime or working with individuals who have experience with fundraisers after tragedies.

“We are in the process now of deciding strategy and structure, how to give out the money. We had people today who flew in to meet with county staff to try and coordinate this. The sheriff and I are not involved with this. We started it, but that’s the extent of what we plan to do,” Sisolak told Las Vegas Now.

In an update on the GoFundMe page, Sisolak wrote that the funds are going to Direct Impact Fund, a 501(c)(3) non-profit organization “that focuses on providing fast, effective, and transparent help to those affected by natural and manmade disasters. All donations collected by the Direct Impact Fund reach the intended beneficiary,” according to GoFundMe.

Donors can also make a donation via check by making it out to LAs Vegas Victims Fund and mailing it to:

Another option is making a donation through at any Nevada State Bank branch.

The shooting happened late on October 1, during the Route 91 Harvest Country Music Festival. The shooter, Stephen Paddock, fired form his 32nd-floor room at the Mandalay Bay hotel and casino across the street from the venue. Paddock was found dead by police after entering his hotel room. Investigators are combing through his past to find a possible motive for the shooting. 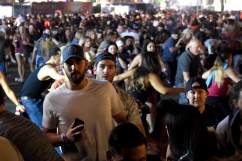 Loading more stories
wpDiscuz
0
0
Would love your thoughts, please comment.x
()
x
| Reply
A week after the Las Vegas concert shooting, a GoFundMe fundraiser set up by officials has raised over $10 million and the donations are still coming in.