Authorities say 64-year-old Stephen Paddock, a man with no criminal history who lived in a senior community nearby, unleashed a barrage of gunfire at a country music crowd from the 32nd floor of the Mandalay Bay hotel, killing 59 and wounding 527 people in the worst mass shooting in U.S. history. This has many people wondering, especially due to previous ISIS propaganda videos that focused on the Vegas strip: Is the mass shooting in Las Vegas a terrorist attack? Is the Islamic State involved?

Authorities said several times since the mass shooting occurred that they do not suspect terrorism as a motive, at least preliminarily. According to the Associated Press, the Islamic State is now claiming – without proof – responsibility for the attack. “BREAKING: Without providing evidence, Islamic State claims Las Vegas attack, says shooter converted to Islam months ago,” AP tweeted. However, after that report, the FBI denied the claims of ISIS, saying, “We have determined to this point no connection with an international terrorist group.”

Preliminary reports from local sheriff’s officials were also that authorities do not suspect terrorism as a motive, although they have not said what motivated the shooter, who was identified as Paddock, of Mesquite Nevada. They were also seeking Marilou Danley, a companion of Paddock’s, for questioning. She was later located. CNN reported that Danley was not involved in the shooting, though, and that she was out of the country at the time. Paddock’s brother, Eric “says his brother did not have affiliations with any terror or hate group, and he doesn’t know why his brother would do this,” CNN reported.

Whether authorities will revise their opinion about terrorism as a result of ISIS’ claim is not clear. They were searching the shooter’s Mesquite home, and they unearthed a cache of weaponry. In some past terrorist attacks, ISIS has released videos of shooters with its claims. It had not produced any evidence in the Paddock situation, and some of Paddock’s behaviors – such as gambling – were inconsistent with ISIS’ beliefs. There is, in short, no evidence that ISIS is telling the truth about Paddock, rather than simply trying to score a propaganda point.

Although authorities have not articulated the shooter’s motive, the sheriff did say they believe the mass shooting is a “lone wolf attack.” He said at 9 a.m. eastern time in another news conference that authorities needed to investigate the motivating factors involving the shooting. Terrorism requires more than a distraught individual deciding to take many lives, he said. The shooter killed himself, police said.

Sheriff Joe Lombardo, when asked by a reporter if it was an “act of terrorism,” said “no, not at this point. We believe it was a local individual. He resides here locally. I’m not at liberty to give you his place of residence yet, because it’s an ongoing investigation, we don’t know what his belief system was at this time. … Right now we believe he is the sole aggressor at this point and the scene is static.”

The casualty count grew through the night. Horrifically, at least 59 people were killed and at least 527 people were injured in the mass shooting, Las Vegas police said.

Police scanner traffic described a chaotic scene that was still active as of 6:23 a.m. on the east coast. Despite widespread reports that there were possibly multiple shooters, though, police said that they think there was just one gunman, who was down in the Mandalay Bay hotel, writing, “At this time we do not believe there are any more shooters. More information to come shortly from @Sheriff_LVMPD.”

However, scanner traffic grew increasingly frantic throughout the early morning hours as police dispatched “strike teams” to numerous hotels and locations throughout Las Vegas after eyewitnesses reported an active shooter or shooters unleashing rapid gunfire at concertgoers near the Mandalay Bay. Eventually, police revealed there was only one shooter and one shooting scene – Paddock and Route 91.

GettyPeople tend to the wounded outside the Route 91 Harvest Country music festival grounds after an apparent shooting on October 1, 2017 in Las Vegas, Nevada.

There were 14 victims, at least, who were still in critical condition, according to The Los Angeles Times. There were reports of dozens of people sheltering in buses at a fairgrounds and 1,000 people needing evacuation from a Michael Jackson theater. Family members of victims were being transported to police headquarters.

Heightening concerns early on about potential terrorism: In May, an ISIS propaganda video that makes threats against Las Vegas landmarks caused authorities enough concern that they sent out warning notices to hotels on the famous Strip. “In the video that calls for lone wolf attacks, several Strip properties were prominently displayed,” reports Las Vegas Now. You can read more about that report here.

The reports of multiple gunmen at a concert raised obvious concerns that this attack could be on the level of the Bataclan massacre in Paris, France. In that terror attack at a music hall concert, reports BBC, “three heavily armed gunmen got out. Less than three hours later they were dead, having killed 90 people at the venue and critically injured many.”

Raising additional concerns about terrorism: The fact that there were two terrorist attacks earlier in the day on October 1 – one in France, and the other in Canada – not to mention the fact that Las Vegas is a high-value target for ISIS, and terrorists have staged attacks at concerts before, most notably the Ariana Grande concert in England.

Earlier in the day on October 1, it was announced that a 30-year-old man is being held on several charges after police said he attacked a police officer Saturday night in downtown Edmonton before running over several pedestrians while fleeing from officers in a U-Haul truck. Abdulahi Hasan Sharif, 30, an Edmonton resident of Somali origin, has been identified as the suspect in the likely terror attacks, the CBC reports. He is in police custody, but authorities have declined to confirm his identity.

There was also a terrorist attack in Marseille, France, on October 2. That attacker used a knife.

The reports in Las Vegas centered around a country concert near or at the Mandalay Bay resort and casino on the Las Vegas strip. Las Vegas police confirmed on Twitter, “We’re investigating reports of an active shooter near/around Mandalay Bay Casino. Asking everyone to please avoid the area. #LVMPDnews.”

A few minutes later, police gave information on Twitter about a media staging area, but they had released no additional information as the situation grew increasingly chaotic on the Las Vegas strip. Scanner traffic was extremely grim, as the incident continued to expand, and police were dispatching “strike teams” to numerous other Strip hotels, for other unconfirmed shooting reports, including that medics were being shot at.

Some of those shooting reports did not pan out (“negative, shots fired at Bellagio,” police said in one such report on the scanner).

Please avoid heading to the south end of the Strip. Las Vegas Blvd is shut down at Tropicana, southbound past Russell Rd at this time.

Read more about the past ISIS threats here: 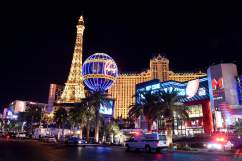 Loading more stories
wpDiscuz
0
0
Would love your thoughts, please comment.x
()
x
| Reply
Is ISIS behind the mass shooting on the Las Vegas strip at Mandalay Bay? Is it a terror attack? Are terrorists involved in the active shooter incident?