An escaped cow was on the loose in Prospect Park in Brooklyn and officers from the New York Police Department tried to take it down while it roamed throughout the park for multiple hours. The crazy scene took place Tuesday beginning at around 11 a.m. local time, and it took almost two hours to capture it.

Watch a live stream of the hunt for the cow in the video at the top of the page.

Finally, around 1 p.m. local time, the cow appeared to be cornered by authorities after they barricaded it inside a fence with their vehicles.

During the chase, large crowds gathered around the park fence to watch the situation unfold, as the cow wandered aimlessly on soccer fields with an NYPD truck following closely behind. Multiple times, officers came close to getting the cow before it ran away to the other end of the park. According to ABC 7 News, a child who was in a stroller was injured by the cow when it knocked over the stroller. The child was transported to a nearby hospital for treatment, and it wasn’t immediately clear how serious the injuries were.

The New York Daily News reported that the cow escaped from a nearby slaughterhouse and was running wild in Prospect Park for a number of hours. The NYPD’s Emergency Services Unit traveled to the scene near Coney Island and Caton Avenues after receiving calls about the escaped cow beginning at around 11 a.m. local time. Animal Care Centers from the city have also been called in to try and sedate the animal, but it seems that anytime officers get close, the cow runs away.

The baby cow is believed to have run away from a slaughterhouse located on Fourth Ave. and 16th St. and ran two miles to the park.

A few people even took it upon themselves to make Prospect Park Cow Twitter accounts.

Calling all my COWS all over the Tri-State meet me in Brooklyn. #ProspectPark NOW #CowLivesMatter #CLM

Someone in the audience throw over a ball. i want to play.

Sorry guys this is BULL$&!?. Not taking any questions at this time! #cow #prospectpark #brooklyn #moo pic.twitter.com/fhGuV6BBDX

As the incident began, others took to social media to document the rare occurrence.

if you're hearing helicopters over Prospect Park it's because this brown cow is loose on the Parade Grounds soccer fields! I'M ON COW WATCH pic.twitter.com/kNuKYueylW

First day back from vacation and this is what I come home to: a cow on the loose in #Brooklyn near #ProspectPark @cbsnewyork pic.twitter.com/IB46ERL40w

There is a COW loose in prospect park and I've never been more amused by a news story in my life.

Why I'm Leaving New York, by the Prospect Park Cow 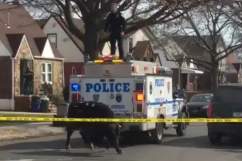 Read More
Brooklyn
wpDiscuz
0
0
Would love your thoughts, please comment.x
()
x
| Reply
A cow is on the loose in Prospect Park in Brooklyn. Watch a live stream as cops try to corral it.