At least eight people were killed and nine more were injured in a terrorist attack Tuesday in Lower Manhattan. Police say a 29-year-old male suspect was shot by a responding officer and taken into custody after using a truck to mow down pedestrians. His identity hasn’t yet been disclosed by authorities, but news reports say it’s Sayfullo Saipov, a 29-year old from Uzbekistan.

“Let me be clear, this was an act of terror and a particularly cowardly act of terror aimed at innocent civilians,” NYC Mayor Bill de Blasio said at a police briefing.

This is the first terrorist attack with fatalities in the U.S. since September 11, 2001, and it happened just blocks away from where the the World Trade Center used to stand.

Police say the attack started at 3:05 p.m. local time when the suspect drove the truck southbound on the West Side Highway at Houston Street, striking bicyclists and pedestrians on the way to Chambers Street. It came to a stop when it collided with a school bus nearby Stuyvesant High School. Police said two adults and two children on the bus were injured as a result of the crash.

The suspect exited the vehicle and displayed a paintball gun and a pellet gun while running around the street before a responding officer shot him. He was taken to a nearby hospital and is in police custody.

Guy running here is the suspect involved in the Manhattan Bloodshed. pic.twitter.com/wFxOEvzbW6

Witnesses said that the suspect yelled “Allahu Akbar” as he ran out of the truck.

“He did make a statement when he exited the vehicle,” New York City Police Commissioner James P. O’Neill said. “If you look at the M.O. of the attack, that’s consistent with what’s been going on. That, along with the statement, have enabled us to label this a terrorist attack.”

The attack took place just 0.5 miles away from One World Trade Center. Sixteen years ago, 2,606 people were killed by terrorists who drove two planes into the buildings.

Check below for how close the incident took place to the site of the World Trade Center.

Google MapsA map showing the proximity of the attack in Manhattan to the One World Trade Center.

De Blasio said that New Yorkers and all of Americans remember that day and the response in unity that followed. He added that he’s confident his city will come back from the attack the same way they did following the 9/11 attack.

“We know that this action was intended to break our spirit,” he said. “But we also know New Yorkers are strong, New Yorkers are resilient, and our spirit will never be moved by an act of violence and an act meant to intimidate us.”

“We will respond as we always do, we will be undeterred.” pic.twitter.com/lwotUc8wGm

No terrorist group has claimed responsibility for the attack yet, but using a van as a weapon has become a staple of the Islamic State in recent years. ISIS has encouraged its supporters to carry out lone world attacks by using vehicles. and numerous incidents in Europe and the U.S. have taken place.

“I look and see a truck going down toward Chambers Street, he’s in the bike lane … clearly in the bike lane,” a witness told CNN. “I see two gentlemen laying in the bike lane with tire trucks across their body. You can tell they’re not here anymore. I hear the lady screaming…I hear 9 or 10 gunshots…and all the police came running… they’re just as much confused as I was. They clear the area. I see a yellow school bus that this truck clearly crashed into…Somebody had more than road rage to do something like that.” 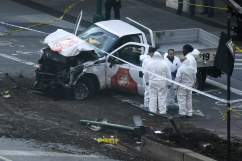