WASHINGTON, DC - OCTOBER 25: US President Donald Trump speaks to reporters before boarding Marine One to depart from the White House on October 25, 2017 in Washington DC. President Trump is traveling to Dallas Texas to attend a fundraiser. (Photo by Mark Wilson/Getty Images)

President Donald Trump spoke to reporters on Wednesday for about 15 minutes before boarding Marine One from the White House en route to Dallas, Texas. He was asked about the recent deadly military operation in Niger.

Trump said he didn’t “specifically” order the operation in Niger on October 4 that left four U.S. soldiers dead and two others wounded. He said his generals did.

“My generals and my military, they have decision-making ability,” Trump said. “As far as the incident that we’re talking about, I’ve been seeing it just like you’ve been seeing it. I’ve been getting reports. They have to meet the enemy and they meet them tough and that’s what happens.”

Trump's full remarks to White House reportersPresident Trump speaks to reporters at the White House, touching on unity in the Republican party, tax reform, the fight against ISIS and more.2017-10-25T17:57:35.000Z

Trump’s comments about the deadly operation in Niger begin at the 8-minute mark.

Here is the full exchange, which took place on the White House lawn on Wednesday afternoon:

Q: What can you tell us about the mission in Niger and what went wrong?

Q: Did you order the mission?

Q: Did you give them authority?

TRUMP: “I gave them authority to do what’s right so that we win. That’s the authority they have. I want to win and we’re going to win and we’re beating ISIS very badly. You look at what’s happened in the Middle East, we have done more in eight months than the previous administration has done in many years.”

“Now what happens is you decimate them and that’s what we’ve done, we’ve decimated ISIS in the Middle East. They go to Africa, they go to places. When they get there, we meet them there. That’s what goes on. It’s a tough business, it’s a tough war, but we are winning it and you know what? We’re going to continue winning it.”

“With that being said, my generals and my military, they have decision-making ability. As far as the incident that we’re talking about, I’ve been seeing it just like you’ve been seeing it. I’ve been getting reports. They have to meet the enemy and they meet them tough and that’s what happens.”

Marine One can be seen in the background as Trump prepares to leave for Joint Base Andrews in Maryland to board Air Force One to Dallas, Texas, where he will get a hurricane relief update after Hurricane Harvey hit the state in late August and speak at a Trump rally.

On October 4, U.S. troops were conducting a routine operation in Niger when they were ambushed and four soldiers were killed.

During a press briefing at the Pentagon on Monday, Gen. Joseph Dunford, chairman of the Joint Chiefs of Staff, updated reporters on the investigation into what happened and asked for “a bit of patience to make sure that what we provide to you when we provide it is factual.”

“And the other thing I think that’s also important is when this information is finally available, the first thing we’re going to do is go visit the families in their homes should they welcome us,” Dunford said. “And we will have a team go in of experts — and I’ve done this personally myself several times — a team of experts go in to the family and share with them all the facts that are available as a result of the investigation, and give them an opportunity to ask questions.”

“And as soon as we’re done with that we’ll come back in here and we’ll share exactly that same information that we share with the families. And so, when I tell you today we don’t know it will be a fair answer — we don’t know,” he said.

“And I’ll tell you everything we do know definitively. And I’ll tell you what the key elements are of the investigation that we hope to find out in the coming weeks,” Dunford said. “But again, with regard to being transparent I think we do owe the families and the American people transparency in incidents like this and we intend to deliver just that.” 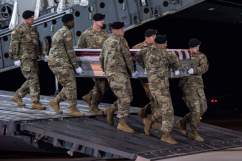 John Kelly Describes What Happens When Troops Are Killed in Action 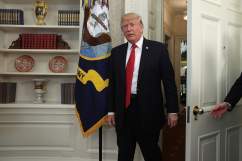 Trump Tweets, October 25: What He Said on Twitter Today