Mike Pence Twitter Mike Pence and his wife, Karen, before they walked out of the 49ers/Colts game.

Vice President Mike Pence and his wife, Karen, walked out of the Colts-49ers game after some players knelt in protest during the National Anthem. Some people responded with condemnation, some responded with praise, but others responded with mockery and brought out the memes, jokes, and GIFs.

Some people joked that people had now figured out a way to get Pence to leave.

Hang on. You're saying kneeling not ONLY protests America's racist injustice. But ALSO wards off The Pence?

Mike Pence shouldn't worry, his presence didn't dignify the game. He has no dignity to give. pic.twitter.com/linyuX5Amr

They thought the Charlottesville white supremecists would catch more media attention last night, then flew Pence to the 49ers game, of ALL teams. These cats man.. they funny. pic.twitter.com/EXGDySQ86x

I like how pence is using the protest as excuse to leave colts 49ers game… we kno why u really left bruh pic.twitter.com/LOrCYAUPpk

Quick someone play the National Anthem in the oval office so that football players can kneel so Trump and Pence can leave.

Others, though, heaped Pence with praise.

Pence wrote on Twitter, “We were proud to stand – with all our @Colts – for our soldiers, our flag, and our National Anthem ??” along with a photo of himself and Karen Pence standing for the National Anthem.

We were proud to stand – with all our @Colts – for our soldiers, our flag, and our National Anthem ?? pic.twitter.com/mkZiKMkPDD

The Vice President also released a statement explaining his decision to subsequently leave the game. “At a time when so many Americans are inspiring our nation with their courage, resolve, and resilience…now, more than ever, we should rally around our Flag and everything that unites us…While everyone is entitled to their own opinions, I don’t think it’s too much to ask NFL players to respect the Flag and our National Anthem,” Pence wrote in a tweet.

I stand with @POTUS Trump, I stand with our soldiers, and I will always stand for our Flag and our National Anthem. pic.twitter.com/B0zP5M41MQ

Pence literally went to an NFL game so that he could leave an NFL game. https://t.co/5hnsFbZNtS

That has people on Twitter accusing Pence of staging a premeditated stunt, since it wasn’t hard to guess that some people would kneel.

1. Pence is a good boy. He should get a cookie for that. pic.twitter.com/McNGPYxEEs

This is Pence's signature.. how does this even say "Mike Pence" pic.twitter.com/2qpAlOvaY6

Someone tell Mike Pence he could've stayed. The kneeling is about police brutality soooo… he left for the wrong reason ????????. pic.twitter.com/VrByUv391p

Pence's face as Twitter collectively takes a knee to his ? ? pic.twitter.com/P7cMCrxb6H

While we're at it chat with @realDonaldTrump and tell him calling Black players SOBs to fire up the base is quite undignified! #MikePence pic.twitter.com/Ik7LRcQMsc

#Pence "Come Mother, let's go, it's time to do what we really came here for" pic.twitter.com/sXcKeS7sdx

Trump and Pence aren't playing around! It's war. pic.twitter.com/PcLVDmyTHL 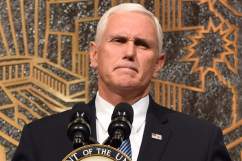