Chants broke out on the University of Florida campus in Gainesville during white nationalist Richard Spencer’s October 19 UF speech, and he responded by calling protesters “shrieking morons” and said the accused killer of Charlottesville counter-protester Heather Heyer was a “scapegoat.” In return, people in the audience called Spencer an idiot and ugly. Tensions were also high in advance of the speech as the Florida governor declared a state of emergency for Alachua County as fears of violence grew.

However, the University of Florida wrote that the measure, “which came at the request of Alachua County Sheriff Sadie Darnell, is not in response to any specific heightened threat. It is a process that enables various law enforcement agencies to work together more efficiently. For example, agencies from multiple jurisdictions can be mobilized, if necessary, without bureaucratic delays.” You can watch the speech below.

In a disjointed opening, Spencer said to the audience gathered on the UF campus, many of whom tried to drown out his speech with negative chants: “White liberals don’t actually care about you. To them, you are a prop. You are a mascot.” Protesters chanted against Spencer as the speech was about to begin. Spencer challenged the protesters by saying, “you are not speaking. You are screaming and attempting to create a mob that is trying to shut down free speech… are you adults? Are you? Are you ready to think for yourself…you all look like immature preschoolers who aren’t ready for ideas that might get a little challenging.” A man in the audience asked, “Given how ugly all of you guys are. Why do you think white people are supreme? I do have eyes.” “To me, white people are truly beautiful,” Spencer responded. He accused institutions of hiring fewer white people. He said parents “can remember a white America that they think they can return to. We’ve never experienced that…White identity is heightened by the fact we live in a multicultural world. We have a more powerful white identity precisely because we are under threat.”

Another man on stage with Spencer said that students were acting like “animals” but have been “brainwashed” by “anti-white hate.” Asked why he doesn’t take responsibility for the violence in Charlottesville, in which a counter protester was killed when a car rammed into her at a white nationalist rally, Spencer responded by calling the suspect a “scapegoat.” “What happened with the death of Heather Heyer remains unclear,” Spencer said. “…Are they going to throw me into moral prison? Not only do I not call for violence, I have explicitly called for peace and for dialogue.” He said that all he demands is that James Fields, the accused killer of Heyer, receive a fair trial. He alleged that Fields was “used as a scapegoat. His vehicle was attacked,” said Spencer. He said that Fields was attempting to escape. He said it was a “very ambiguous situation. He deserves justice.” (Witnesses and the police chief in Charlottesville called the attack deliberate when it occurred. Fields had posted on Facebook about Hitler and Nazis.) “Peaceful ethnic redistribution,” Spencer said, is “happening right now” because of migration.

In a statement explaining the decision to allow the Richard Spencer speech to go ahead, UF explained, “Although UF leadership has denounced Spencer’s white supremacist rhetoric, the University, as a state entity, must allow the free expression of all viewpoints.” UF said, “Despite not being invited by the University of Florida, National Policy Institute’s President Richard Spencer is scheduled to speak on October 19 on campus.”

According to the Miami Herald, “UF policy stipulates that any outside organization can rent space on campus. Spencer’s request was initially denied for what UF called safety concerns following the death of a counter-protester in Charlottesville, Virginia in September.” University of Florida President W. Kent Fuchs said in a statement, “For the record, I don’t stand behind racist Richard Spencer. I stand with those who reject and condemn Spencer’s vile and despicable message.”

3. An Earlier Speech Was Prevented Due to Security Measures & Security Will Cost At Least $500,000

According to the university, “The NPI had previously requested a date of Sept. 12 to speak on campus, which UF denied based on specific security threats. Rescheduling the event has provided additional time to make security arrangements.” The University “is charging the allowable costs of $10,564 to rent the facility and for security within the venue. Additional security costs cannot be passed on to NPI,” UF reported.

“Since safety of students, faculty, staff and visitors to campus is the University’s top priority, UF will end up paying at least $500,000 to enhance security on campus and in the city of Gainesville. This includes costs from the University of Florida Police Department, Gainesville Police Department, Alachua County Sheriff’s Office, Florida Department of Law Enforcement, Florida Highway Patrol and other agencies who are providing first responders.”

4. Spencer Said the Emergency Declaration Put Him on Par With a ‘Hurricane’ & Zombie Apocalypse

Spencer says he's glad @PresidentFuchs "stood behind" him and allowed the event to go on. #SpencerAtUF

According to CNN, Spencer has spoken at college campuses throughout the country, igniting protests, “including at Texas A&M in December and Alabama’s Auburn University in April. He also led a group of supporters carrying torches in May in Charlottesville in a display that critics said evoked images of the Ku Klux Klan.”

5. Protests Broke Out Before & at the Speech & Spencer Called the Protesters ‘Immature Preschoolers’

Protesters chanted against Spencer throughout the speech, which led to an extended back-and-forth between Spencer, other men on stage with him, and the crowd. Protesters also gathered outside the speech. Some of the protesters carried signs against Nazis and President Donald Trump.

Chants of “Go home Spencer” breaking out in the Philips Center drowning out everything he has to say#SpencerAtUF pic.twitter.com/LA7NYRMI7a

Chants of IT'S YOUR FAULT start as Richard Spencer talks about Heather Heyer, killed in Charlottesville #SpencerAtUF pic.twitter.com/yCRvbxMh9A

Spencer then took questions from the audience. A man was arrested with a firearm before the speech. You can read more about that arrest here: 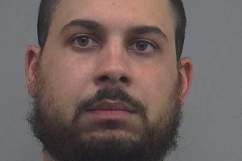