Getty People scramble for shelter at the Route 91 Harvest country music festival after apparent gun fire was heard on October 1 in Las Vegas, Nevada. A gunman has opened fire on a music festival in Las Vegas, leaving at least 20 people dead and more than 100 injured. Police have confirmed that one suspect has been shot. The investigation is ongoing.

At least 50 people were killed and over 400 others were injured Sunday after a lone suspect opened fire at the attendees of a crowded country music festival in Las Vegas.

At this time there is in excess of 50 deceased and over 200 injured individuals.

The Las Vegas Metropolitan Police Department responded to reports of an active shooter with multiple victims near Mandalay Bay Hotel and Casino at Route 91 Harvest, a two stage, three-day country music festival on the Vegas strip.

At about 2:20 a.m. Eastern, police scanner traffic indicated that one suspect armed with “multiple firearms” was “down” in room 135 on the 32nd floor at Mandalay Bay after a police operation. Police confirmed the suspect killed himself, and said they don’t believe it was an act of terrorism. The suspect was identified by authorities as Stephen Paddock.

It hasn’t been confirmed by authorities how the shooting took place, but some speculated the shooter took aim at concert-goers from the window of the high-rise hotel room.

Here’s what you need to know about Route 91 Harvest:

1. Shocking Photos & Videos Show the Chaos at the Festival

Country music artist Jason Aldean was playing on the stage as the gunfire erupted. In the video above, Aldean can be heard playing when suddenly rapid gunfire can be heard and the music stops. Suddenly, intense screams are heard as people at the concert go running for cover.

Photos and videos taken at the concert Sunday showed multiple victims, including some on the ground bleeding from injuries.

In the videos below, concert goers can be seen sprinting and ducking for cover as a loud, rapid sounds — presumably gunshots — can be heard.

One witness told a reporter that he heard “hundreds of shots” fired from “clip after clip” after a loud bang. He claimed there were multiple shooters, but police later said there was one.

Other photos show victims bleeding on the ground.

NOTE: Some of the images below contain disturbing content.

The scene of the shooting.

The scene in Las Vegas.

A person lies on the ground covered with blood at the Route 91 Harvest country music festival after apparent gun fire was heard on October 1, 2017 in Las Vegas, Nevada.

2. Jake Owen Played at the Festival on Sunday, Jason Aldean Was Scheduled to Play

Country music star Jake Owen tweeted that he heard shots being fired near Mandalay Bay, the place he was staying at. He tweeted, “Gun shots!!! Vegas. Pray to god. Love you guys. Love you Pearl.”

Praying for everyone here in Vegas. I witnessed the most unimaginable event tonight. We are okay. Others arent. Please pray.

Owen was scheduled to play the festival at 8 p.m. local time and was followed by Aldean, who was playing on the stage as his show was interrupted by gunfire. His representatives confirmed to ABC 10 reporter Frances Wang that he is “OK.”

VIDEO shows @Jason_Aldean was performing at #Route91 when shots were fired. His team confirmed w/ ABC News he is OK.

Before taking the stage Sunday, Aldean was interviewed by a festival organizer.

“We try to go out every night and give everybody what they paid for,” Aldean said during the interview. “They may only catch one show a year, and it may be this one. So every show you have to go out and turn it up a notch and give it everything you got.”

Another country music artist, Luke Combs, tweeted he was at the festival and was safe. 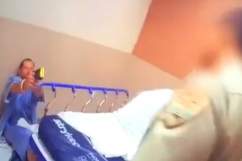 3. The Festival Included Acts Such as Eric Church & Jake Owen

There were some big names at this year’s concert. On Friday, Lee Brice played on the main stage and was followed by headliner Eric Church. On Saturday, the main stage at the festival featured acts such as Maren Morris and Sam Hunt. On Sunday, when the shooting took place, Big & Rich played before Owen and Aldean.

Aldean was scheduled to close the 2017 festival with his music.

See the 2017 concert’s lineup and schedule by clicking here.

Passes for the festival came at a price tag of $210 for general admission for all three days, and there were no single day passes sold for the event. Previous years at the concert have brought similar names, including Luke Bryan, Toby Keith, Brad Paisley and Little Big Town last year.

According to AXS, Route 91 Harvest started as a part of Live Nation in 2014. The company reportedly teamed up with MGM Resorts to “create a must-see country music show with some of country’s biggest names.” The festival was previously known as Route 91 and has risen to become one of the top country annual music festivals in the country.

“Las Vegas and country music are synonymous with over the top events, and we know that Route 91 Harvest will deliver the latest, greatest experience for fans from all over the world,” Live Nation President of Country Touring Brian O’Connell said in a news release. “After launching Watershed and Faster Horses, this festival is the next step in the evolution of Live Nation’s fan and artist friendly festival family. We’re thrilled to have it land in MGM Resorts International’s newest venue, The Lot.”

In its first year, it had headlining acts including Miranda Lambert, Blake Shelton, Jason Aldean, Dierks Bentley and more.

Rolling Stone wrote that the festival brought over 30,000 people its inaugural year, and it also brought “cover songs, tanned skin (after all, it is the desert), plaid shirts and more beer sales than you could shake a stick at.” 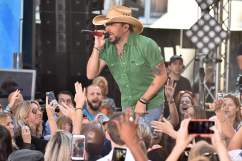 Jason Aldean at Route 91 Las Vegas Shooting: How Is He? [UPDATES]

5. The Festival Allowed Medium-Sized Backpacks Inside

While the suspect’s motive in the shooting is currently unknown, the concert tried to place strict regulations on attendees as to what’s allowed in and what’s not.

According to its FAQ page, the festival allowed a backpacks of “medium size” to be brought into the show. There was also a large list of things that were explicitly banned from making it into festival grounds. Security at the gates searched for the any contraband.

Its website says that people were allowed to come and go from the festival as long as they were wearing their bracelet (tickets). There was also no age limit at the festival, which started at 2 p.m. and ended around midnight daily. 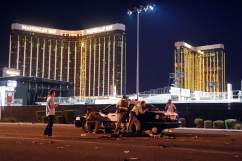