Solemender entered the Shark Tank with its innovative foot product that has a removable and re-freezable roller that works to both cool and massage the sole and heel to alleviate pain.

We interviewed founder Ehan Kamat, who invented the product at the age of 12, after watching his mother roll her foot on a frozen water bottle and realizing there had to be a better alternative. Using a tissue box and a plastic ball, he created the first prototype. Eventually enlisting the aid of orthopedic surgeons and foot specialists, he launched in 2014 and has sold $25,000 worth of product and hopes to partner with retailers like Bed Bath & Beyond and Whole Foods in the future.

Now a high school student at Mary Institute and Saint Louis Country Day School, the junior juggles running a business with studying for several AP classes and participating in his school’s robotics team.

I watched my mother roll her foot on a frozen water bottle back when I was 12 as she tried to relieve foot pain. I learned that doctors recommended this, but thought there had to be a better way than a bottle that can crack, roll away or warm up quickly. I came up with the first prototype that night using a tissue box and plastic ball then sketched it out. My dad helped me find a local company in Saint Louis that was willing to hear my pitch.  The CEO and CFO liked the idea and we went forward with it.

Advice for Future Contestants & Nerves in the ‘Tank’

Do your homework. I have literally watched Shark Tank for half of my life and have seen every episode at least once. My dad and I prepared notebooks with extensive notes, ideas, possibly questions and angles and practiced over and over. I was nervous and intimidated, but I was fortunate to have done a ton of pitching already. Also I had watched the show so much, it was almost like I already knew the Sharks and just finally got to see them face to face.


The first prototype took about a year. This was before 3D printers were so ubiquitous.  The actual first prototype was a huge clunky stainless steel contraption with a roller that could literally knock someone out! Eventually we were able to get the size down to a more manageable one. We had to take into consideration all the shipping and weight issues as well as packaging restrictions. Some of the research that went into that included getting information on the market size for foot pain. The product also had to take in consideration the average width of a human foot so this was another factor that we devoted a lot of research to. After we had a working prototype, I was able to take it to orthopedic surgeons and foot specialists who were able to help vet the product along with their patients and customers.

Plans for a Sole-ful Future

I am now applying to college. I definitely want to pursue business and entrepreneurship and maybe even product design. I have a couple other consumer product ideas I am working on including a French cuisine product and one in the realm of hydroponic vegetable gardening. 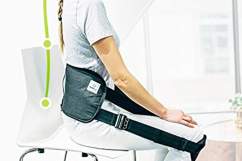 Loading more stories
wpDiscuz
0
0
Would love your thoughts, please comment.x
()
x
| Reply
Solemender entered the Shark Tank in Season 9 with its roller that relieves foot pain. We interviewed the teenager who created it.