Stephen Paddock was “known to” Las Vegas Police before he opened fire from the Mandalay Bay Resort and Casino in Las Vegas late Sunday night and killed at least 58 people who were attending the Route 91 Harvest Festival. However, the 64-year-old did not have any major offenses or convictions on his criminal record. He did have a minor traffic citation and also sued a casino in 2014 after falling there. The motive for the shooting remains unknown, and it’s believed that he acted alone.

Las Vegas Police told ABC News that Paddock was found in a Mandalay Bay hotel room on the 32nd floor with at least ten long rifles. He was found dead. NBC News reports that the shooting is not linked to international terrorism.

“He was shot, but I cannot tell you that it was the police that shot him,” . “He may have self-inflicted that gunshot wound. Those details are still emerging throughout our investigation.”

McMahill also said that Paddock had no major “derogatory” offenses on his criminal record aside from a minor traffic citation in Las Vegas.

Clark County CourtsPaddock filed a lawsuit against a casino in 2012. It was dismissed in 2014.

A public records search of Clark County Court cases revealed that Paddock filed a lawsuit against the Cosmopolitan of Las Vegas hotel and resort. Records show he was suing for “Negligence – Premises Liability.”

According to the Las Vegas Review-Journal, Paddock sued the casino after he fell. Paddock claimed he “slipped and fell on an obstruction on the floor” and was injured because of the “dangerous condition.”

According to the records, the lawsuit was filed in September 2012. It was dismissed with prejudice on October 3, 2014. The two sides reached a settlement paid through arbitration.

Paddock also had a private pilot license, FAA records show. The license was issued on November 17, 2003 and he was allowed to fly a single-engine airplane and an instrument airplane. His most recent medical examination according to the records was in February 2008.

At the time he got the pilot’s license, he was living in Mesquite, Texas in Dallas County. Records show that he needed glasses for “near vision” while piloting. NBC5 in Dallas reports that records show Paddock had multiple addresses in Mesquite before he moved to a city of the same name in Nevada. Mesquite, Nevada is located in Clark County, north of Las Vegas. Mesquite, Texas is a much larger city and a suburb of Dallas.

“What’s unique for us is the gunman, the shooter, and the person with him, we in the Mesquite Police Department have not had any contact with these people in the past. We haven’t had any traffic stops, any law enforcement contact, no arrests or nothing,” Mesquite, Nevada police spokesman Quinn Averett told CNN. He said Paddock’s home was searched and authorities found more weapons and ammunition.

NBC News reported that Paddock owned two aircraft. ABC News also reports that he was a licensed hunter in Alaska. He worked as an accountant or auditor, according to ABC News.

However, at the time of the shooting, Paddock was retired. Relatives told the Washington Post that he was “quietly” living in Las Vegas because he liked to gamble and attend concerts. His neighbors told the Post that he told them he was a professional gambler who would take off for extended periods of time with his girlfriend, Marilou Danley.

The shooting on the Las Vegas strip is now the deadliest in U.S. history. Police say more than 50 people were killed and over 400 injured.

“We have no idea how or why this happened,” Eric Paddock, Paddock’s brother, told ABC News. “As far as we know, Steve was perfectly fine.”

NBC News reported that Paddock was married and going through a divorce. The woman’s name hasn’t been released. The nature of his relationship with Danley is still unknown. She referred to herself as a “proud” mother and grandmother on her Facebook page. 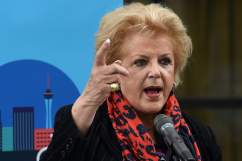 Loading more stories
wpDiscuz
0
0
Would love your thoughts, please comment.x
()
x
| Reply
Stephen Paddock, the suspect in the Las Vegas strip shooting, was "known to authorities," but didn't have a criminal record. He did sue a casino in 2012 though.