Speaking to CNN, Eric Paddock of Orlando, Florida, said Stephen, 64, had worked as an accountant and was a “multimillionaire.”

“He was a wealthy guy playing video poker … on cruises,” Eric Paddock told the news outlet, adding he once won $40,000 on a slot machine. “He played high-stakes video poker to be able to stay at home in the casino.”

Eric said his brother would often be the recipient of free rooms and meals in return for the amount that he gambled at Vegas casinos. He told The Associated Press that his brother’s wealth was “substantial” and included real estate.

According NBC News, a casino executive with access to Paddock’s Multiple Currency Transaction Reports said the shooting suspect gambled over $10,000 per day on “multiple occasions” at Las Vegas casinos. In some cases, those amounts rose to upwards of $20,000-$30,000.

The Multiple Currency Transaction Reports are IRS-mandated and required to be filed whenever there’s a “transaction in currency involving cash-in and cash-out of more than $10,000 in a gaming day.” The reports didn’t specify whether or not the gambling transactions came on wins or losses.

“He seemed normal, other than that he lived by gambling, he was very open about that,” Judy told the publication. “First time we ever met him, he handed us the key to the house and said, ‘Hey, would keep an eye on the house, we’re only going to be here every now and then.'”

Eric Paddock claimed his brother had no political or religious affiliation and was “just a guy” who rarely showed violent traits. He said their father, Benjamin Paddock, was on the F.B.I.’s Top Ten Most Wanted list for robbing banks. He escaped police custody and was described in a late 1960s arrest warrant as exhibiting “psychopathic” traits.

Bejamin Paddock was on the run from authorities for several years and changed his appearance and moved many times before he was eventually caught.

Stephen’s other brother, Bruce, said their family grew up in California, though he hadn’t spoken to him in almost a decade. He said Stephen once made a living through owning and managing apartment buildings, which proved to be financially worthwhile.

“I don’t know how he could stoop to this low point, hurting someone else,” he told NBC News.

The Daily Mail reported that Paddock lived in a home 90 minutes outside of Vegas in Mesquite. He purchased the home in a retirement community for $369,000 in 2015, records show.

At the home, he lived with “companion” Marilou Danley, who was sought by police immediately after the shooting because her debit/credit card was located inside Paddock’s hotel room. She was outside of the country at the time of incident and is believed to have nothing to do with the shooting.

The shooting incident started Sunday during a headlining performance by country music star Jason Aldean at Route 91 Harvest Music Festival. At least 58 people were killed and more than 515 were injured when Paddock fired out of his hotel room’s window at the over 22,000 people who gathered for the concert across the street, police say.

A deceased Paddock was located by authorities less than two hours later. He was found dead of a self-inflicted gunshot wound in a 32nd-floor hotel room at Mandalay Bay Resort and Casino following a police operation.

Police say Paddock had at least 10 weapons with him in the hotel room, and he’s believed to have checked in to the hotel September 28. It’s not currently known how he got the weapons and ammunition into the room, and a possible motive for the slayings hasn’t been identified by investigators.

Photos and videos taken at the concert Sunday showed multiple victims, including some on the ground bleeding from injuries. In the videos below, concert goers can be seen sprinting and ducking for cover as a loud, rapid sounds of gunfire can be heard.

President Donald Trump on Monday, in remarks to Americans at the White House, said he intended to visit Vegas on Wednesday to meet with first responders and the family members of victims.

“Hundreds of our fellow citizens are now mourning the sudden loss of a loved one,” Trump said. “A parent, a child, a brother or sister. We cannot fathom their pain, we cannot imagine their loss. To the families of the victims, we are praying for you and we are here for you and we ask God to help see you through this very dark period.” 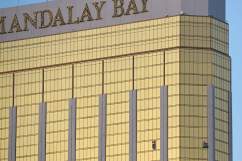