Two months before the Las Vegas concert shooting on Sunday night, Stephen Paddock reportedly reserved two hotel rooms at a Chicago hotel that overlooks the Lollapalooza music festival, according to TMZ. However, Paddock never showed up. The four-day festival draws over 100,000 people each day and Malia Obama was one of the attendees of the 2017 festival.

The site’s sources said that the 64-year-old Paddock requested “view rooms,” so he would have a perfect view of Grant Park, the Lollapalooza venue. The sources added that Paddock and his girlfriend, Marilou Danley, had never stayed at the hotel before.

The Chicago Police Department told the Chicago Tribune that they were aware of the TMZ report. “We are aware of the media reports and have been in communication with our federal partners,” chief police spokesman Anthony Guglielmi told the Tribune.

On Wednesday, Clark County Sheriff Joe Lombardo confirmed that Paddock also rented a room at The Ogden in Las Vegas during the September 22-24 Life Is Beautiful Festival, a week before the Route 91 Harvest Country Music Festival. According to the Las Vegas Review-Journal, Lombardo said Paddock used Airbnb to rent a room. The 2017 Life Is Beautiful festival included performances by Lorde, Chance The Rapper and Wiz Khalifa.

Lombardo said investigators still haven’t determined why Paddock stayed at The Ogden during the festival. “We don’t know yet,” he said.

A source told the Review-Journal that Paddock wanted to get a room at the El Cortz, which was sold out. He then rented three rooms at The Ogden, all for different dates that overlapped the days of the festival.

On late Sunday night, Paddock opened fire from a room on the 32nd floor of the Mandalay Bay hotel and casino, killing at least 58 and injuring over 500 others. He was found dead by police in his hotel room. It was the deadliest mass shooting in U.S. history.

The motive for the shooting remains unknown. Lombardo said late Wednesday that investigators haven’t ruled out the possibility that Paddock had an accomplice. 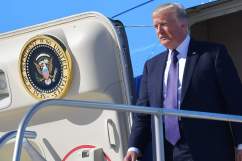