A day after the deadliest mass shooting in U.S. history, President Donald Trump will be in Puerto Rico, which is still slowly recovering from the devastating Hurricane Maria. Trump is following through with his planned trip, which comes after days of criticism for his administration’s response to Maria. You can watch videos of Trump’s visit below.

Trump and First Lady Melania Trump were scheduled to arrive at Luis Muiz Air National Guard Base in San Juan at 11:45 p.m. They will then attend a briefing before meeting with individuals impacted by the storm.

At around 3:30, Trump and the First Lady were set to meet with U.S. Virgin Islands Governor Kenneth Mapp aboard the U.S.S. Kearsarge. After that meeting, they will meet with Mapp, Puerto Rico Governor Ricardo Rossello and other military personnel.

Following a meeting with Navy and Marine Corps members aboard the U.S.S. Kearsarge, Trump and Melania Trump will head back to Washington. But on Wednesday, Trump will be back on Air Force One to fly to Las Vegas, the site of Sunday night’s mass shooting. At least 59 people were killed and over 500 others injured when Stephen Paddock opened fire at a country music festival crowd.

“I will be visiting Las Vegas on Wednesday to meet with law enforcement, first responders, and the families of the victims,” Trump said in his speech on Monday.

Meanwhile, Puerto Rico is still recovering from Maria, which struck the U.S. territory late last month. About 44 percent of the island’s 3.4 million residents, all of whom are U.S. citizens, remain without drinking water, the Department of Defense said on September 28. The storm was also blamed for at least 18 deaths on the island.

While some federal agencies did respond to the devastation quickly, Trump was widely criticized for his response to the storm, especially because of his tweets. In one series of tweets, Trump appeared to blame Puerto Rico for the slow response. Residents told NBC News they hope Trump sees just how dire their situation is.

“My concern is that he takes a lot of things personal and he needs to just stay focused and if we get Puerto Rico back on its feet, it’s a win on him, no matter who likes him or doesn’t like him,” Jasmin Rivera Woods told NBC News. 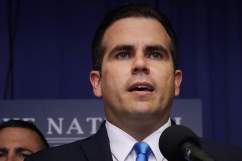