Getty A woman walks as children play in a flooded street of Niamey following heavy rains, on June 15, 2017.

As the controversy over Trump’s reaction to the killing of four Green Berets in Niger, questions are being raised over America’s role in the west African nation. Niger is a landlocked nation along the Niger River. It neighbors Libya to the northeast, Algeria to the northwest and Nigeria to the south. It is a completely separate nation to Nigeria. People from Niger are referred to as Nigerien. It is the largest country in western Africa although most of it is covered by the Sahara desert. The capital city is Niamey and the country has a population of 20.6 million.

The New York Times reported in February 2013 that 150 U.S. military personnel had entered the country to help the French military. The French had engaged militants in nearby Mali that year and as a result, President Obama ordered the U.S. military to set up a drone surveillance operation in Niamey.

ABC News reports that there are around 800 U.S. military service members in Niger at the time of writing. Many are working in construction in the northern part of the country setting up further surveillance operations. While there are around 100 working directly with the Nigerien military in aiding their fight against ISIS.

On October 4, four U.S. Green Berets were killed while on a routine patrol in the country. They have been named as Sergeant La David Johnson, and Staff Sergeants Bryan Black, Dustin Wright and Jeremiah Johnson. It’s been reported that the four were killed as part of a group of 12 Green Berets who were accompanying 40 Nigerien soldiers to a village close to the Niger/Mali border. The four men were killed when they were ambushed by 50-or-so ISIS militants. Typically the Green Berets operate in teams of 12 known as Operational Detachment Alpha groups.

CBS News reports that the four were taken completely by surprise in the attack and that four Nigerien soldiers were also killed. The network adds that French fighter jets aided the U.S. soldiers within 30 minutes of the first shots being fired. 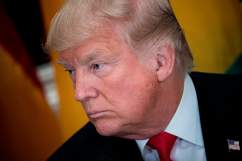 READ: Donald Trump’s Statement on Niger That Was Never Released

Loading more stories
wpDiscuz
0
0
Would love your thoughts, please comment.x
()
x
| Reply
As the controversy over Trump's reaction to the killing of four Green Berets in Niger, questions are being raised over America's role in the west African nation.