Getty WASHINGTON, DC - NOVEMBER 27: Supporters of the Consumer Financial Protection Bureau hold signs as they gather in front of the agency November 27, 2017 in Washington, DC. President Trump has picked White House Budget Director Mick Mulvaney as the acting director after former director Richard Cordray stepped down and named his chief of staff Leandra English as acting director, setting up a possible court battle over who will lead the agency. (Photo by Alex Wong/Getty Images)

The little-known Consumer Financial Protection Bureau is at the center of a power struggle in the wake of Director Richard Cordray’s retirement.

Upon his exit from the bureau, which came a year before the end of his term, Cordray designated his deputy director, Leandra English, as his successor according to the Dodd-Frank financial reforms that created the agency. However, the Trump administration has also installed a temporary director, White House budget director Mick Mulvaney, citing the Federal Vacancies Reform Act of 1998.

English has filed a lawsuit seeking to block the action, and the case is currently under review in a federal circuit court. In the meantime, consumers are left wondering what the recently-created bureau does exactly, and how it protects them.

Here’s what you need to know about the Consumer Financial Protection Bureau:

1. CFPB Was Created by the Dodd-Frank Reforms in the Wake of the 2008 Financial Crisis

Richard Cordray (L) nominee for director of the Consumer Financial Protection Bureau, and Mary Jo White, nominee for chair of the U.S. Securities and Exchange Commission, are sworn in before testifying at a confirmation hearing before the Senate Committee on Banking, Housing and Urban Affairs on March 12, 2013 in Washington, DC.

The Dodd-Frank financial reforms were passed in XXXX in the wake of the 2008 financial crisis. At the time, a number of large financial institutions were on the verge of collapse. Lehman Brothers filed for bankruptcy in September 2008, and the following day the U.S. government announced an $85 billion bailout package to AIG. On October 3, 2008, Congress passed the Emergency Economic Stabilization Act of 2008, authorizing the Department of Treasury to disperse up to $700 billion in emergency funds to the failing banks.

After the initial cash bailout, Congress began to examine the subprime lending practices that had led to the market collapse. In June 2009, Obama sent a proposed version of a Wall Street reform bill meant to address the issues that led to the crisis by overhauling the regulatory system that governs it. The Dodd-Frank Wall Street Reform and Consumer Protection Act—named for its sponsors in the House Reps. Barney Frank and Chris Dodd—contained about 90 percent of the changes that Obama had recommended, according to the former president, including the creation of the Consumer Financial Protection Agency.

2. Its Creation Was Conceived by & Largely Executed by Now-U.S. Senator Elizabeth Warren

GettyUS President Barack Obama (L) arrives to nominate former Ohio Attorney General Richard Cordray (R) to lead a consumer protection bureau, a central feature of a law overhauling the rules that govern the financial sector during an event in the Rose Garden of the White House in Washington, DC, July 18, 2011.

At the time of the financial crisis, now-U.S. Senator Elizabeth Warren was a professor at Harvard Law School specializing in bankruptcy law. In 2008, Senate Majority Leader Harry Reid appointed Warren to an oversight committee charged with the implementation of the emergency bailout legislation. In that position, Warren was an advocate for the creation of a regulatory agency geared toward consumer protection.

After her vision was born in the form of the Consumer Protection Financial Bureau, President Obama appointed Warren as a special advisor to help oversee its creation. Many expected the president to appoint Warren as the bureau’s first director, but according to Politico, the two did not believe the Republican-majority Senate would confirm her. Instead, Obama appointed former Ohio Attorney General Richard Cordray in January 2012. 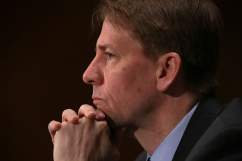 3. CFPB Enforces Federal Regulations, Campaigns for Consumer Rights and Education, & Has the Power to Force Financial Institutions to Pay Reparations to Consumers

Moving forward, CFPB will be the single, consumer-focused regulating authority, consolidating the existing authorities scattered throughout the Federal government under one roof.  And, the Bureau’s oversight includes the large banks and credit unions that had historically been regulated by the Federal government, as well as independent and privately owned “non-bank financial institutions” that had never been regulated before.

This means that for the first time, the Federal government will be able to regulate the activities of independent payday lenders, private mortgage lenders and servicers, debt collectors, credit reporting agencies, and private student loan companies.

CFPB’s jurisdiction is largely over the consumer side of the U.S. financial industry, including but not limited to payday lenders, debt collectors, banks, credit unions, and securities firms.

4. Republicans Disapprove of CFPB & Think Its Powers Are Broad and Overreaching

Since its inception, Republicans in Congress have long thought that the bureau has too much power over businesses, and a Washington appellate court ruled in October 2016 that the agency was unconstitutionally structured due the autonomous power of its director. The court dismissed a $109 million penalty that the CFPB levied against PHH Corp in 2014, ruling that CFPB administration did not have the power to throw out a three-year statute of limitations in order to impose the fine.

Presiding U.S. Circuit Court Judge Brett Kavanaugh wrote that the structure of the CFPB “poses a far greater risk of arbitrary decision making and abuse of power, and a far greater threat to individual liberty, than does a multi-member independent agency.”

“[T]he ruling makes a small, technical tweak to Dodd-Frank and does not question the legality of any other past, present, or future actions of the CFPB,” said Elizabeth Warren after the decision. CFPB remains in operation and is appealing the case, which is expected to go all the way up to the U.S. Supreme Court.

“We are long overdue for new leadership at the CFPB, a rogue agency that has done more the hurt consumers than help them,” said GOP Rep. Jeb Hensarling, chairman of the House Financial Services Committee. “The extreme overregulation it imposes on our economy leads to higher costs and less access to financial products and services.”

On November 3, CNBC reported that Trump held an Oval Office meeting in which he discussed the ramifications of firing Cordray. According to sources, Trump and the officials in the room reached a consensus that such an action would make Cordray into a “martyr,” and opted to let him continue in his post.

5. After Richard Cordray, CFPB’s First Director, Stepped Down in November, a Power Struggle Has Erupted Over Who Will Take His Place

CFPB Director Richard Cordray announced his impending retirement in November 2017 amidst speculation that he was leaving his post a year earlier in order to run for governor of Ohio next year.

Upon his departure on Friday, November 24, Cordray named his deputy director, Leandra English, as his successor until a permanent replacement is found. However, President Trump begged to differ, tapping White House budget director Mick Mulvaney as interim head of the bureau.

On Sunday the 26th, English filed a lawsuit against Trump seeking an emergency injunction and alleging that the temporary appointment was illegal under the Dodd-Frank Act:

The Dodd-Frank Act is clear on this point: It mandates that the Deputy Director “shall . . . serve as the acting Director in the absence or unavailability of the Director.” 12 U.S.C. § 5491(b)(5)(B). By statute, she serves in that capacity until such time as the President appoints and the Senate confirms a new Director. See 12 U.S.C. § 5491(b)(2).

Disregarding this statutory language, President Trump issued a press release on the evening of November 24 indicating his desire to install defendant Mulvaney, the Director of the White House Office of Management and Budget, as the Bureau’s Acting Director. Under this scenario, Mr. Mulvaney would seek to serve indefinitely as the interim head of a statutorily “independent” agency while simultaneously occupying his current White House post.

Additionally, English argues that, since Mulvaney would serve dual roles in the White House and at the bureau, his appointment is anathema to the design of the CFPB, which is mean to be an “independent agency.”

Mulvaney, a former U.S. congressman from South Carolina, has gone on record panning the CFPB, calling it a “joke … in a sick, sad kind of way” and cosponsoring legislation that attempted to dismantle it.

“I am saying we want director Mulvaney to lead this agency, and that is a decision that the President is allowed to make and one that he has made and has legal authority to do so,” said White House press secretary Sarah Sanders on Monday. “Now that the CFPB’s own General Counsel — who was hired under Richard Cordray — has notified the Bureau’s leadership that she agrees with the Administration’s and DOJ’s reading of the law, there should be no question that Director Mulvaney is the Acting Director. It is unfortunate that Mr. Cordray decided to put his political ambition above the interests of consumers with this stunt,” she added.

“Wall Street hates it like the devil hates holy water. And they’re trying to put an end to it with Mr. Mulvaney stepping into Cordray’s spot,” said Democratic Senator Dick Durbin. “But the statute is specific, it’s clear, and it says that the deputy shall take over.”

English and Mulvaney reportedly issued dueling introductory emails to staffers at the CFPB on Monday morning in which both signed off as acting director, according to CNN. Judge Timothy Kelly, a Trump-appointee, will preside over English’s lawsuit.

Loading more stories
wpDiscuz
0
0
Would love your thoughts, please comment.x
()
x
| Reply
The little-known Consumer Financial Protection Bureau is at the center of a partisan power struggle in the wake of Director Richard Cordray's retirement. Here's what you need to know about the CFPB.