Glenn Thrush, a prominent reporter for the New York Times, has been suspended by the publication following accusations of sexual misconduct. In an article published November 20 by Vox, multiple women accused Thrush of acting inappropriately toward them.

“The behavior attributed to Glenn in this Vox story is very concerning and not in keeping with the standards and values of The New York Times,” The Times said in a statement on Monday. “We intend to fully investigate and while we do, Glenn will be suspended.”

The Vox story alleges that Thrush presented himself to a 23-year-old aspiring journalist as an “ally and a mentor” before making sexual advances. That unidentified woman said she met Thrush at a colleague’s going-away party from Politico at a bar. The two shared a few drinks, and the night ended on a street corner, where the woman alleges Thrush left her in tears after she resisted his sexual advances.

One of the unidentified woman’s friends shared a text conversation with Vox, showing Thrush was apologetic, but claimed he didn’t “lure” her in, as he was accused of doing.

“I got drunk because I got some sh***y health news,” he wrote in a text message. “And I am acutely aware of the hurdles that young women face in this business and have spent the better part of 20 years advocating for women journalists.”

The woman was one of three who cited similar experiences with Thrush to Vox. Thrush, 50, has been married to Diane Webber for many years. The couple have two teenage twin boys and met while working at one of their first jobs in New York City.

Here’s what you need to know about Webber and Thrush’s relationship:

1. Thrush & Webber Met When They Worked for a Small NYC Newspaper

The 2013 book, Raising a Beatle Baby, by Jere Hester touched on Webber and Thrush’s relationship. Hester wrote that Webber is her “close friend,” and that she met Thrush at their first jobs in journalism at the Downtown Express, a small Manhattan newspaper. There, they all worked under renowned editor Clay Felker.

It’s unclear exactly when Thrush and Webber got married, but they now live together in a home that was sold in 2006 for $402,000 in Kensington, Maryland.

2. The Couple Have Twin Boys Who Recently Celebrated Their Bar Mitzvahs

Glenn Thrush and his two sons.

This past Father’s Day, Thrush took part in a questionnaire for Fatherly.com and said he’s the father of two 14-year-old twin boys named Nathaniel and Charles.

Thrush wrote that Nathaniel’s middle name (Grayson) was after a name on Webber’s side of the family, while Charles is named after his now-deceased mother, Carol. He wrote that even though he’s often busy as the White House correspondent for the New York Times, he sees them “every day” whenever he’s around.

Thrush commented on his strengths as a father in the answer below:

I have never treated them like children intellectually. I’ve always shared what I was reading, what I was listening to musically, with whom I was talking. The membrane between my intellectual life and theirs has always been highly permeable. In terms of their emotional life, of course, I’ve had more boundaries. I don’t know if I’m great at it, but the combination of treating them as adults intellectually and creatively but understanding that they’re children from an emotional perspective is something I’ve certainly been conscious of.

Thrush also admitted to having a “terrible temper” in the Q&A, saying he can be “imperious” when expressing opinions and has the habit of taking things his boys say literally and responding it in an emotional way.

The boys recently celebrated their bar mitzvahs, and he noted they both “nailed” both the Torah portion and their speeches.

“It was a real moment when I had one of those great parental surprises where your kids far exceed what your expectations of them were,” he wrote. 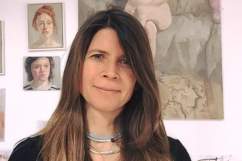 3. Webber Has Decades of Experience in the Journalism Industry

Webber currently works as a project editor at Kaiser Health News in Washington D.C., a position she’s held since August 2011, her LinkedIn account said. In the role, she works on a partnership project between the company and National Public Radio. Its goal is to bring NPR reporters in for workshops lasting a week long long. In addition, Webber also edits the copy of reporters for their website and with other partners.

Webber started her journalism career shortly after she graduated from Barnard College in 1990 with a bachelor’s degree in philosophy. She was also a dance minor at the New York City-based liberal arts school. Her first position in the field was as the editor for Downtown Express (1990-1992) before becoming the managing editor at The Brooklyn Papers until 1998. Her first big breakthrough into the industry was when she worked for almost two years as the copy editor at the New York Post.

“Yes, I got to write headlines at the New York Post for a time,” she wrote on her LinkedIn account. “I wasn’t as great at it as my colleagues, but it was a ton of fun.”

In 2000, she left to become the executive editor for Scholastic and then subsequently worked as the senior editor for the Council for Advancement and Support of Education’s publication, CURRENTS. Prior to landing her current job, Webber worked as an editor at Politico for nine months. 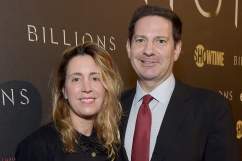 Over the years, Thrush has suffered anti-Semitic abuse over social media. Much of it occurred during his work on the 2016 presidential campaign. In response to the attacks, Webber wrote an op-ed for Forward.com with the headline: “When Your Husband Gets Called a ‘Filthy Kike’ On Twitter.”

In the piece, Webber documents the feeling the couple had after he took the anti-Semitic assaults over social media, saying her husband was called a “Jewish supremacist,” upon many other hateful things.

Webber described herself as being Catholic in the article, noting that the couple raise their twins in the Jewish faith’s Reform movement.

“When our boys started Jewish preschool, though, this specter of them being attacked for their heritage was theoretical, off in a distant, hazy, maybe future,” Webber wrote. “I never imagined that their dad and other Jewish journalists would be targets of persistent hate speech in 2016, just a few months after our boys’ b’nai mitzvah.”

Webber’s op-ed piece talked about how she thought bigotry, racism and hateful dialect was decreasing in the United States. But the experience her family had during the presidential election painted quite a different picture.

In her opinion piece, Webber wrote that her father was of English-Irish descent and would often refer to himself as “poor white trash.” He was born in Appalachia and worked for years as a Special Forces soldier, she wrote. He died in 1994 at the age of 61.

“My dad didn’t have an easy life, but he never responded to his travails with hate or prejudice,” she wrote. “He’d be appalled at this racist name-calling. His daughter sure is.”