#BREAKING @UConn cops just arrested @lucianwintrich for assaulting a student during his "It's ok to be White" speech. Cops have cleared the lecture hall. @WTNH #CTnews pic.twitter.com/ZRmNT0SOo4

Lucian Wintrich, the White House correspondent for the far right, pro-Trump website The Gateway Pundit, has been arrested after he appeared to assault a female student after his “It’s OK to Be White” speech at the University of Connecticut on Tuesday.

“I can confirm that the speaker has been arrested and he is in police custody,” UConn spokesperson Stephanie Reitz told the Hartford Courant. “There are no other arrests and no injuries.” He was charged with breach of peace and released on $1,000 bail, Buzzfeed News reports.

Wintrich, 29, was interrupted by protesters who chanted and shouted him down throughout his speech on the UConn campus. He was invited to speak there by the UConn College Republicans.

After the speech, Wintrich was waiting at the front of the room, where he was confronted by two students. One of the students, a woman, then appears to grab a copy of Wintrich’s speech from his podium. He then chases her up an aisle of stairs, grabbing her and appearing to assault her before police pull him away and out of the building. The woman involved in the incident, whose name is not known, told the Hartford Courant that Wintrich “went for her face.”

You can watch video of that moment here:

BREAKING: @lucianwintrich appears to attack a @UCONN student during speech after she took something off podium. pic.twitter.com/WAcNYAak7c

The moment, about half an hour ago, that Gateway Pundit blogger Lucian Wintrich appears to accost a woman during a speech at UConn pic.twitter.com/R4Dd9eY1v4

“Video of the altercation shows that the guest appeared to remove paperwork from the lectern where Mr. Wintrich was speaking, and that he followed the woman into the audience, where the altercation occurred,” Reitz told the Courant.

It's really unfortunate that some of the kids at @UConn felt the need to be violent and disruptive during a speech that focused on how the leftist media is turning Americans against each other. Tonight proved my point.

NOW: @lucianwintrich was escorted out in a frenzy by #UCONN police. Some graphic language. pic.twitter.com/jccCFAnQ9W

Wintrich was taken by police into a restroom area after the incident, and during the chaos a window was broken.

Police are currently talking to @lucianwintrich in a restroom, the door is closed and windows are shattered pic.twitter.com/YGr8z0DBF7

Students and other protesters then gathered outside the hall where the speech was held.

Students wearing all black and with covered faces, like antics dress, are milling around too. A crowd is still formed around the outside of the building. Students by the door say a police officer announced “he’s been arrested” and went back inside pic.twitter.com/BDbl3woMGY

Officers have asked students to back up so they can lead @lucianwintrich out and be assured he is safe pic.twitter.com/8aohJvwAY5

Wintrich was eventually led out of the building by police:

Officers led him out into a car on the opposite side of the building. The group sprinted, students tripped over each other and the railings, and chased the car. Students demanding officers’ names. The group is starting the disperse

The event began at 8 p.m. in the Andre Schenker Lecture Hall. The event was not paid for with university or other public funds, the school said.

“UConn does not bar speakers on the basis of content. Free speech, like academic freedom, is one of the university’s bedrock principles,” UConn spokesperson Stephanie Reitz told the Hartford Courant. “That being said, a particular speaker’s or group’s presence on campus doesn’t indicate UConn’s endorsement of the presenter or their message. Any student group is free to reserve on-campus space for a speaker or other program as long as the event adheres to UConn’s guidelines, which apply to all student groups and on-campus programming.”

The UConn College Republicans advertised the event as an “opportunity to meet someone on the front lines of the media versus Trump battle.” Wintrich was scheduled to talk about “identity politics, liberal victimhood, anti-conservative bias and other hot-button issues.”

A police presence was on hand throughout the event and Wintrich struggled to get through his speech due to constant interruptions, including chants of “Go home Nazi,” and “Black Lives Matter.”

Wintrich works for The Gateway Pundit, a conservative blog founded by Jim Hoft best known for spreading conspiracy theories. He became the site’s White House correspondent and was credentialed by the White House following the election of President Trump, according to Politico.

Gateway Pundit wrote about Wintrich’s arrest Tuesday night, portraying him as the victim.

Hoft, the site’s founder, wrote, “The far left student activists were screaming throughout his talk. Lucian drank a glass of milk to trigger the leftists. He was attacked soon after this! After the room was clearing out a far left couple approached Lucian at the podium and began harassing him. At one point the women STOLE Lucian’s material. Lucian screamed at her and jumped at her. The woman fell to the floor and the room erupted!

“Lucian was the victim of a criminal act. And police took Lucian away in a squad car. This is what you can expect being a conservative on a college campus today,” Hoft wrote.

Earlier this year, another Gateway Pundit blogger, Michael Strickland, was found guilty of 21 felony and misdemeanor crimes in Oregon after he pulled a gun on protesters during a Portland rally in 2016, according to The Oregonian.

Strickland was later sentenced to 40 days in jail and given 240 hours of community service, a $3,100 in fines, three years of probation and banned from owning guns.

They added, “Time after time, from Trump’s attacks on immigrants and proposed Muslim ban, to neo-Nazi rallies in Charlottesville, JR Romano and @CTGOP have stood idly by, or even defended white supremacists or their antics. Today, a white supremacist invited by Connecticut Republicans physically attacked a student. This is our backyard.”

They also called the state’s Republican party to join them in condemning the incident.

“Now is not the time for silence. We’re calling on@CTGOP to join us and forcefully condemn this attack — and @UConnCRs’s decision to invite an alt-right speaker in the first place,” the CT Democrats said. “Freedom of speech is a cornerstone of our society, and the @UConnDems showed how it could be achieved peacefully, holding a discussion with activists and protesters beforehand to discuss concerns about Mr. Wintrich’s remarks. The contrast could not be clearer.” 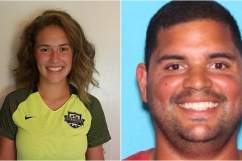 Loading more stories
wpDiscuz
0
0
Would love your thoughts, please comment.x
()
x
| Reply
Lucian Wintrich, of Gateway Pundit, was arrested after appearing to assault a female student at UConn after his "It's OK to Be White" event.