Police have identified 26-year-old Devin Kelley as the sole suspect in a shooting that occurred at the First Baptist Church of Sutherland Springs, Texas, on Sunday, November 5. Police say that Kelley walked into the church wearing all black, wielding a Ruger AR assault rifle, and opened fire on the congregation gathered for the church’s 11 a.m. service. So far, 26 people have been confirmed dead and over a dozen more injured, some critically.

After the shooting, authorities told the media that there had been some sort of ongoing “domestic situation” between Kelley and his in-laws, Michelle and Ben Shields. The Shields were not present at the church at the time of the shooting.

“I’ve been talking to some community members. They think there was a relative there. It was not random…There’s going to be some sort of nexus between the shooter and this small community… somebody in that church will help us find answers,” U.S. Rep. Henry Cuellar (D-Texas), told The Los Angeles Times.

1. Police Say There Was a ‘Domestic Situation’ Between Kelley & the Shields

Since the shooting occurred, there have been various conspiracy theories and rumors about Kelley’s motive. Police have denied any and all unfounded reports that Kelley was a member of Antifa or that he carried out this senseless act of violence on behalf of an organized terrorist group, such as ISIS.

What police have confirmed, however, is that Kelley was having some sort of ongoing “domestic situation” involving his wife Danielle’s parents, Bill and Michelle Shields. According to the Washington Post, police uncovered “threatening texts” sent by Kelley as part of this “family dispute.”

“This was not racially motivated, it wasn’t over religious beliefs. There was a domestic situation going on within the family and the in-laws,” explained Freeman Martin of the Texas Department of Public Safety during a press conference.

Police have not released any more information about this “domestic situation,” but have suggested that Kelley’s motive may have had something to do with this specific disagreement.

Kelley has a bit of a past when it comes to domestic incidents. In 2012, “Kelley was court-martialed after being accused of assaulting his spouse and child,” according to the New York Daily News.

“He assaulted his stepson severely enough that he fractured his skull, and he also assaulted his wife. He pled to intentionally doing it, retired colonel Don Christensen, who was the chief prosecutor for the Air Force, told the New York Times.

Kelley served in the U.S. Air Force. In 2014, he received a bad conduct discharge.

Also in 2014, Kelley was charged with animal cruelty in Colorado, where he lived before moving to Texas.

Church shooting suspect Devin Kelley was charged with animal cruelty in 2014 in Colorado. Witnesses say he beat crying dog with his fists. pic.twitter.com/WTn13Gjyhf

2. Michelle Shield’s Mother, Lula Woicinsky White, Was Among the Victims

‌White with her grandson, David Shields.

Michelle Shield’s mother, Lula Woincinsky White, was among the victims in Sunday’s shooting, according to a Facebook update posted by a woman who says she is White’s niece.

“This was my aunt’s last post before she was murdered this morning in the church shooting. I have no doubt where she is right now. She is in Heaven laying her crowns and jewels at the feet of Jesus and celebrating. I love and will miss you Aunt Lula Woicinski White,” wrote Facebook user Amy Johnson Backus, posting a copy of the last post her aunt put on the social media site.

White was also a member of the church’s congregation and was close friends with other churchgoers, including the pastor, Frank Pomeroy and his wife, Sherri. In 2013, White shared a photo of herself with the Pomeroy’s son, Kameron.

“I call him bratt and he calls me crazy old lady…he’s Pastor Frank and Sherri’s son….he’s away at college now…. I miss his harassment and hugs….. he’s a good bratt…most of the time,” White wrote in the photo’s comments.

3. Michelle Shields Had Strong Ties to the First Baptist of Sutherland Springs, But Wasn’t Present at the Time of the Shooting

According to her Facebook page, Michelle Shields attends church services at the First Baptist Church of Sutherland. She is also friends with several churchgoers, including the pastor’s wife, Sherri Pomeroy. Frank and Sherri Pomeroy’s 14-year-old daughter was killed in Sunday’s shooting. Mr. and Mrs. Pomeroy were out of town at the time.

Michelle Shields and Sherri Pomeroy were friends outside of church as well, as evidenced by photos at events around town. Some of the photos even include Frank and Sherri’s now-deceased daughter.

According to authorities, Michelle was not present at the time of the shooting. It is unclear if her husband Ben attended services at the church.

4. Michelle’s Daughter Danielle Was Married to Kelley &  Also Had Ties to the Church

Kelley married his second wife, Danielle Shields Kelley, in 2014 (he split from his first wife, Tessa, in 2012), according to Danielle’s Facebook page.

Danielle Shields Kelley previously worked as a teacher at the First Baptist Church, according to her profile on Indeed.com. Danielle taught at the church from June 2009 through March 2013.

“Teach the children about GOD, help them with their life stones that are needed. Be a positive influence in their life (sic),” reads her job description.

Danielle is also Facebook friends with members of the church community, including Sherri Pomeroy and the Holcombes; Bryan and Karla Holcombe were both killed in Sunday’s shooting.

A source told Heavy that most of Kelley’s family were members of the church and that Kelley himself had been to the church a few times over the years.

Michelle is Danielle’s biological mother and Ben Shields is her stepfather. Danielle was 16 when her mom married Ben and she changed her last name from Brassfield (Michelle’s maiden name) to Shields. Her brother, David (pictured above), did the same.

It is unknown if Ben Shields had any other children.

5. The Shields Got Married in 2011 & Michelle Often Posts About Her ‘Sweetheart’ Ben on Facebook

Ben and Michelle Shields got married in 2011, according to a post on Michelle Shields’ Facebook page. She often posts messages about Ben, calling him the “love of her life,” and “[her] sweetheart.”

“I have the most wonderful and romantic husband!!!! Candlelight dinner, flowers as I walked in the door from work!!!! And a special thank you to mom and David for helping make this happen!!! I Love you Ben, Mom and David!!! Happy Valentine’s Day,” Michelle wrote on Facebook in February.

“Enjoying a wonderful Birthday with Ben (my sweetheart) at Shady Oaks Speedway!!!!! Really nice track and some good racing,” Michelle wrote on Facebook back in 2015. 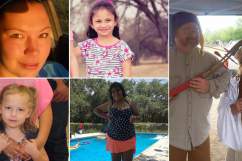 Loading more stories
wpDiscuz
0
0
Would love your thoughts, please comment.x
()
x
| Reply
Michelle and Ben Shields are Devin Kelley's in-laws. A "domestic situation" may have caused Kelley to open fire at the church the Shields belong to.