Police in Providence, Rhode Island say that one person was killed and another was injured Thursday after a vehicle chase and shootout with several officers that ended on Interstate 95.

NBC Connecticut reported that a male, now identified as Donald Morgan, was being taken to court was left inside a police cruiser alone for a short period of time. Somehow, police said Morgan stole the vehicle and took off. He eventually ditched the vehicle on Potters Avenue in South Providence.

Police updated the incident during the afternoon, saying that Morgan is still at large and the theft and shootout involving a white pickup truck was unrelated.

Officers were seen going door-to-door with rifles and dogs in the hunt for the Morgan. After receiving a description of him, they located the stolen truck and police initiated a chase. Eventually, the truck got into an accident on I-95. There was also a female in the passenger side of the truck, police said.

The incident was all captured on video by police body cameras and witnesses. In one video, filmed by a witness and then posted to Twitter, several officers can be seen with their guns drawn and what appears to be the white pickup truck the suspect was said to have stolen.

The truck appears to have been closed in as a result of an accident, and responding officers approach the passenger side of the car with their guns drawn. Suddenly, numerous shots ring out, and the truck’s tires start spinning out of control. Large clouds of smoke fill the air as the officers move to get out of the way.

Watch the chaotic witness video below:

No law enforcement officers were injured in the incident, Providence Public Safety Commissioner Steven Pare told NBC Connecticut. The woman in the car was injured and was taken to a nearby hospital with “serious” injuries. Her condition wasn’t immediately known.

“We are actively investigating all the circumstances,” Pare said to reporters. “There are multiple officers involved in the shooting, and we have one person that is deceased.”

The truck involved in the shooting remained on I-95, appearing to have been riddled with bullets as officers continued their investigation.

Many parts of I-95 were closed as a result of the incident, and officials urged motorists to avoid the area.

On ramp from Memorial Blvd to 95 North and Rt. 10 to 95 N will remain closed for many hours. Avoid the area. 95 is open.#Providence

After the incident, Rhode Island State Police Col. Ann Assumpico told CBS Boston that the trooper left the cruiser with the suspect for a short amount of time.

“I know the trooper did leave the vehicle for a short time,” she said. “I want to sort through it. You have to understand, when we come upon an accident on the highway, it is our duty to check on the welfare of the people. So once I get the full story, I will let you know.” 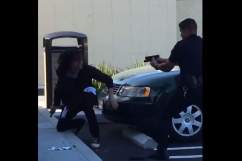 Loading more stories
wpDiscuz
0
0
Would love your thoughts, please comment.x
()
x
| Reply
Police say that one person is dead and another is injured following an officer-involved shooting in Providence, Rhode Island on Thursday. Watch the video.