In a major moment for Democrats in Virginia and around the country, Lieutenant Governor Ralph Northam has defeated Republican Ed Gillespie to become the commonwealth’s next governor by a significant margin, CNN reports. You can watch Northam’s victory speech above.

In what was expected to be a tight race, Northam, a 58-year-old physician, defeated Gillespie, a lobbyist and former chairman of the RNC, by more than 7 points. Northam is joined in victory by the rest of the Democratic statewide ticket. Justin Fairfax, 38, will become the next lieutenant governor and Mark Herring will remain attorney general. Democrats rode the wave in the legislature, picking up a surprising number of seats in the House of Delegates. There is a possibility the House, controlled by Republicans since 2000, will flip to the Democrats, a highly unexpected result.

“Tonight we proved that we’re stronger when we value and fight for one another. Onward to Richmond,” Northam tweeted.

Tonight we proved that we're stronger when we value and fight for one another. Onward to Richmond! pic.twitter.com/QIKjRzPHqG

Congratulations to a great friend and public servant @FairfaxJustin on his win tonight! Looking forward to building a stronger Virginia alongside you. pic.twitter.com/SVdiD0ibx9

Northam will succeed fellow Democrat Terry McAuliffe, who has held the seat since defeating Republican Ken Cucinelli in 2013 and decided not to seek re-election. The state was won by Hillary Clinton in the 2016 presidential election thanks in large part to wins in the DC suburbs in northern Virginia. Northam won those areas by an even wider margin, the Washington Post reports.

Tonight Virginians chose progress over fear and division. I am so proud of @RalphNortham @MarkHerringVA @fairfaxforlg and Dems all over VA

While Gillespie ran a campaign that focused on societal issues, including preserving Confederate statues and fighting against undocumented immigrants, Northam focused on the economy and health care, while calling Gillespie out for fear-mongering on immigration. NBC News exit polls show that health care was the top priority for Virginia voters. Guns were also a top issue.

Buried in exit poll: Northam, F-rated by the NRA, TIED with voters whose #1 issue was guns. pic.twitter.com/0hIxGwctr0

Democrats have called the victory a sign that voters are tired of President Donald Trump and an indicator that Republicans running a campaign with a Trump tone, but Trump has already tried to distance himself from Gillespie, by tweeting against him from South Korea.

“Ed Gillespie worked hard but did not embrace me or what I stand for,” Trump tweeted Tuesday night. “Don’t forget, Republicans won 4 out of 4 House seats, and with the economy doing record numbers, we will continue to win, even bigger than before!”

Ed Gillespie worked hard but did not embrace me or what I stand for. Don’t forget, Republicans won 4 out of 4 House seats, and with the economy doing record numbers, we will continue to win, even bigger than before!

Trump did not campaign in Virginia for Gillespie, but did make robocalls on election day, and had previously tweeted about the race.

“Ralph Northam will allow crime to be rampant in Virginia,” Trump tweeted. The day before the election he tweeted, Gillespie, “will totally turn around the high crime and poor economic performance of VA. MS-13 and crime will be gone.”

October 14: "Ed Gillespie will never let you down!"

November 7: "Ed Gillespie worked hard but did not embrace me or what I stand for." pic.twitter.com/9AseO92AJ1

And Gillespie’s campaign strategy was touted by former Trump strategist Steve Bannon, who told the New York Times, “He’s closed an enthusiasm gap by rallying around the Trump agenda. And I think the big lesson for Tuesday is that, in Gillespie’s case, Trumpism without Trump can show the way forward. If that’s the case, Democrats better be very, very worried.”

Some Democrats have seen the Tuesday night wins as a reason for hope in Alabama, where a special election will be held December 12 to fill the seat vacated by now-Attorney General Jeff Sessions. Republican Roy Moore, a Bannon-backed candidate, will face Democrat Doug Jones. Polls have showed a tighter race than expected there. 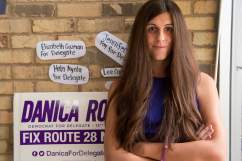 Read More
Breaking News, Politics, Virginia
Ralph Northam, a Democrat, has been elected as the governor of Virginia over Republican Ed Gillespie. Watch live video of his victory speech here.