Prior to his career in politics, Northam served in the United States Army during the Gulf war and is a doctor. He earned his M.D. at Eastern Virginia Medical School.

Northam is married and has 2 children that reside in the state of Virginia.

Here’s what you need to know about Northam’s family:

1. Pam Northam is an Educator

Ralph Northam has been married to his wife, Pam, have been married for over 20 years. Mrs. Northam worked as the Community Outreach Coordinator for Lynnhaven River NOW, a nonprofit that aims to improve water quality of the Lynnhaven river.

Before working in the nonprofit sector, Mrs. Northam taught high school biology in Virginia. While working as a teacher, she recognized the need for STEM in elementary education, which eventually led to her becoming a science specialist in grades K through 5.

Throughout Northams campaign, Mrs. Northam traveled across Virginia discussing the views her family takes on the issues, especially when it comes to education.

In late August Mrs. Northam visited the Danville Science Center to talk about the needs and the future of local education. Northam listened to the educators there, getting their points of view on the challenges of reaching young learners.

2. Northam’s Son is a Neurosurgery Resident

Ralph Northam has a history in medicine, specifically in pediatrics and neurosurgery because of his time serving as a medical officer in the United States Army. His son is following in his medical footsteps.

Weston Northam, Ralph’s son, is a neurosurgery resident near Norfolk, Virginia. After growing up near Norfolk with his family, Weston studied at the University of North Carolina and went on to pursue a career as a neurosurgeon.

According to the UNC Department of Neurosurgery, Weston is currently a resident at East Virginia Medical School. Being a medical resident did not prohibit Weston to attend some of his father’s campaign events. He attended the Virginia primaries and was able to celebrate the victory there with his father earlier this year.

3. Northam’s Daughter is a Web Developer

Northam’s daughter, Aubrey Northam, is a graduate of the university of Virginia. The 26-year-old recent graduate is a web designer. Her website says that she is a web developer, graphic designer and decent person.

The website goes on to say that she loves puzzles, naps, psychological thrillers and, much in line with her father’s platform, going green. She also states that she has a modest collection of cats.

At the University of Virginia, Aubrey concentrated on media theory and classical and digital studio art. Aubrey now lives in Norfolk near her family and sometimes appears by her father’s side on the campaign trail.

4. Pam and RalphTraveled Throughout His Army Service

From 1984 to 1992, Northam served as a medical officer for the United States Army. During his time in the military, Northam finished a pediatric residency and a child neurology felowship in Washington, D.C. He also treated evacuated casualties in Germany during Operation Desert Storm.

After welcoming his first child and completing 8 years of service, Northam left the U.S. Army with the rank of major. They now travel often to Richmond and throughout the state of Virginia.

The Family Shares a Love of Children and Medicine

Giving this little guy ? on his Halloween costume! pic.twitter.com/YUjQtaoDA7

The Northam family has a history of working with children and medicine. Pam Northam worked as an educator for years before becoming an education advocate and speaking on behalf of children and STEAM career options. She also took time to study Pediatric Occupational Therapy at Baylor University and the University of Texas.

Northam himself studied child neurology after completing a pediatric residency during his time in the military. Afterward, he worked as a pediatric neurologist at the Children’s Hospital of the King’s Daughters in Norfolk, Virginia. He can often be seen taking photos with children while campaigning.

Northam established Children’s Specialty Group, which is his current medical practice. The practice provides pediatric care to patients. He has also served as an assistant professor of neurology at Eastern Virginia Medical School teaching medicine and ethics. 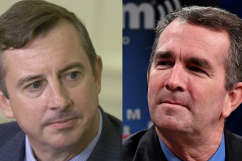