With less than one month to go until the general election for Senate in Alabama, Republican candidate Roy Moore has been dealing with intense scrutiny following five women coming forward with allegations of sexual misconduct. Many of the women claim Moore either sexually harassed or assaulted them when they were minors. Moore and his campaign have categorically denied the allegations, labeling them false and the result of a “witch hunt” against him.

Moore’s on the ballot for the special election to replace former Senator Jeff Sessions on December 12. He defeated Luther Strange, who served in the seat after Sessions was appointed attorney general, in a primary election. Moore is going against against Democrat Doug Jones in the general election.

In addition to the sexual misconduct allegations against him, Moore has received blow back for funds he reportedly received from an Alabama charity which weren’t disclosed. According to CelebrityRichness.com, Moore has an estimated net worth of around $2 million and has yearly earnings around $300,000.

1. Moore’s Campaign Has Raised Over $2 Million

According to campaign finance filings with the Federal Elections Commission, Moore led Jones in campaign fundraising for the special election by a 3-to-2 margin after the October reporting date. The figures came out in the latest campaign finance report and showed that from April 1 to September 30, Moore’s Senate campaign raised over $2.5 million. It’s also spent around $2 million and had a current balance of around $543,000 at the time of reporting.

From September 7-30, Moore raised more than $1.1 million while Jones’ campaign raised $1.6 million from May 8-September 30. Jones’ campaign spent $610,000 and remained with a balance of around $1 million in the report.

Some of Moore’s money was raised by the National Republican Senate Committee, which has since announced it’s ceased fundraising for Moore due to the recent sexual misconduct allegations.

NRSC Chairman Cory Gardner went further, saying that if Moore doesn’t withdraw from the race and wins, the Senate “should vote to expel him.”

NRSC Chairman: If Moore refuses to withdraw and wins "the Senate should vote to expel him" pic.twitter.com/CJYNjZerHu

2. A Report Found Moore Privately Took in Almost $200,000/Year From a Charity

GettyAlabama Chief Justice Roy Moore leaves a rally in support of a monument of the Ten Commandments August 16, 2003 in Montgomery, Alabama.

According to an article by The Washington Post, Moore was paid nearly $200,000 a year privately by a charity. Moore had previously said he didn’t take a “regular salary” for part-time work he performed at the Foundation for Moral Law, an organization he founded. But documents obtained by The Post indicated that he arranged a plan where he’d receive $180,000 per year from it. The article stated that as president of the charity, Moore brought in over $1 million from 2007-2012.

The Foundation for Moral Law is a nonprofit organization based in Montgomery, Alabama which, according to it’s “About Me” page, “exists to restore the knowledge of God in law and government and to acknowledge and defend the truth that man is endowed with rights, not by our fellow man, but by God.”

Whenever the charity was unable to afford Moore’s full salary, he was given a promissory note intended for back pay — eventually worth $540,000 — the article stated.

In addition to Moore’s salary from the charity, the foundation also employed at least two of Moore’s children. Moore’s wife, Kayla, is now the president of the foundation and The Post reported that she was paid around $195,000 over three years, ending in 2015.

Moore and his wife have denied the reports of the salary privately paid to him, saying at a November 12 campaign event that they were completely false.

“They said I took over a million dollars. There were not a million dollars,” Moore said at the event, according to Breitbart. “I wish I had a million dollars. In fact, I didn’t take the money they awarded me for a salary because I had my own recognition and opted to embrace that salary myself and not take anything from the foundation. So my salary collection wasn’t so much. Over eight years it would have been about $87,000 a year—so I had to take a note and a mortgage for the rest of it. But I never got the money. So, the Washington Post finally realized this after they published an article saying my wife and I got a million dollars, saying, ‘You didn’t pay taxes for what you didn’t get.'” 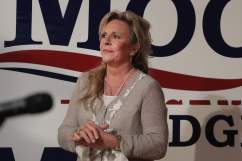 At one time, Moore was one of the highest paid judges in the United States. A 2003 report by the Times Daily, Moore earned an annual salary of $172,155 when he was the Chief Justice of the Alabama Supreme Court.

But controversy struck over his opinion and action in regard to a religious monument on state grounds. A complaint was filed because of the way he handled the planned removal of the Ten Commandments monument, and he defied U.S. District Judge Myron Thompson’s 2002 ruling that the monument violated the Establishment Clause of the First Amendment.

If all Chief Justice Moore had done were to emphasize the Ten Commandments’ historical and educational importance… or their importance as a model code for good citizenship … this court would have a much different case before it. But the Chief Justice did not limit himself to this; he went far, far beyond. He installed a two-and-a-half ton monument in the most prominent place in a government building, managed with dollars from all state taxpayers, with the specific purpose and effect of establishing a permanent recognition of the ‘sovereignty of God,’ the Judeo-Christian God, over all citizens in this country, regardless of each taxpaying citizen’s individual personal beliefs or lack thereof. To this, the Establishment Clause says no.

The Ten Commandments monument was eventually moved to a non-public room in the judicial building. But Moore’s annual salary was in jeopardy when the Alabama Judicial Inquiry Commission filed a complaint with the Alabama Court of the Judiciary. The complaint suspended Moore from his Chief Justice position pending a formal hearing.

“Chief Justice Moore has violated the Alabama Canons of Judicial Ethics as alleged by the JIC in its complaint,” the opinion ruling said. Moore was subsequently removed from his post and appealed the ruling to the Supreme Court of Alabama. The appeal was rejected and upheld his removal, citing it as an appropriate punishment.

Moore found his way back to the bench years later, though, when he won a general election in 2012 and defeated Democrat Bob Vance. He resigned amid additional scrutiny over his same-sex marriage beliefs and actions in 2016 and announced he’d be running for Sessions’ vacant Senate seat. 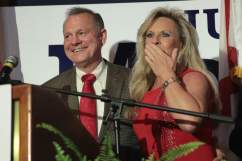 The Daily Beast reported in September that Moore failed to disclose about $150,000 in income to the federal ethics officials. According to the filings with the Alabama Ethics Commission, Moore listed between $50,000 and $150,000 in compensation received through numerous speaking engagements. However, his filing with the Senate Ethics Committee two months later showed he denied receiving any payments in 2016 for speeches or appearances.

In addition to that, The Daily Beast article pointed out that Moore’s filing said he nor his wife had any outstanding liabilities more than $10,000. But his Alabama filing listed between $150,000 and $200,000 in liabilities owed to a credit union and a loan.

Brendan Fischer, an employee at the Campaign Legal Center, told The Daily Beast that the failure to report the discrepancies was troubling.

“What is surprising is that these violations are so egregious,” Fischer wrote in an email to the publication. “This is not some complicated area of law. We are talking about a simple financial disclosure form with clear instructions, which asks for information very similar to what Moore had already reported to Alabama a few months prior. Moore was the Chief Justice of the Alabama Supreme Court, so he can’t possibly claim that the simple instructions for filling out the Senate Financial Disclosure form were too difficult for him to follow.” 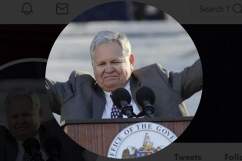 5. Moore Has Said He Plans to Sue The Washington Post

Since the allegations of Moore’s sexual misconduct from decades ago have come to light, he’s vehemently denied them, labeling them “fake news” and a “desperate attack” by Democrats trying to ruin his campaign ahead of the December 12 special Senate election.

“These allegations are completely false and are a desperate political attack by the National Democrat Party and The Washington Post on this campaign,” he said in a statement. “If any of these allegations were true, they would have been made public long before now.”

Good statement, but Roy Moore should say this publicly. Look the Enemy in the face and call them out. pic.twitter.com/wRJFqpKdkl

On November 12, Moore threatened to sue The Post over the allegations.

“The Washington Post published another attack on my character and reputation because they are desperate to stop my political campaign,” he said during a campaign speech. “These attacks said I was with a minor child and are false and untrue — and for which they will be sued.”

Moore continued, asking why, after 40 years of being “scrutinized in the press,” the allegations would come out one month away from the Senate election?

I want to make this clear: I have not provided alcoholic beverages to a minor. I have not been guilty of sexual misconduct with anyone. These allegations come only four weeks—30 days, about—before the general election. Why now? For 40 years I’ve been so scrutinized in the press, investigated by the attorney general at one time years ago, investigated by the Judicial Inquiry Commission of the Court of the Judiciary. I’ve run five statewide campaigns, every one of them hotly contested. Three county elections, every one of them hotly contested. And you know I’ve been at the center of two national controversies over religious liberty, one over the Ten Commandments—the other over same-sex marriage.

To think that these charges come just 30 days prior to the general election is incomprehensible.

The next day, Moore’s wife, Kayla Moore, wrote in a lengthy post on her personal Facebook account that the Moore campaign is continuing to gather evidence which shows all of the accusers against her husband were paid to come forward.

Roy Moore's wife Kayla writes on Facebook the campaign is gathering evidence the Moore accusers were paid to come forward – which will part of their lawsuit. pic.twitter.com/fKXzuSmIK5

“We knew something was coming, just did not know what next,” she wrote. “This is the same Gloria Allred that did the very exact same thing to Trump during his campaign. Going on two months now they’ve been on a witchhunt here in Etowah County and our state advertising people to step forward with accusations and we are gathering evidence of money being paid to people who would come forward.”

Read More
5 Fast Facts, Politics, US Politics
Follow News ↓
Roy Moore has faced intense scrutiny for funds he reportedly received and weren't disclosed by an Alabama charity. Learn more about his net worth.