Getty The Seattle Space Needle is viewed during dusk with Mt. Rainier in the background May 30, 2000 in Seattle, WA.

Seattle voters head to the polls—a.k.a. their mailboxes, as the city utilizes a mail-in ballot system—on November 7, 2017, to choose a new mayor. Incumbent Ed Murray declined to seek re-election earlier this year following allegations of sexual assault, and ultimately resigned in September. Positions 8 and 9 on the City Council are also up for election, as is the office of city attorney.

Additionally, three statewide ballot measures and one local measure will appear on the ballot, as will judicial elections for Court of Appeals, several legislative races, three port commissioner positions, and multiple King County offices, including county executive and county sheriff.

Here’s what you need to know before you mail in your ballot:

POLLING HOURS & LOCATIONS: Seattle elections are administered by the King County Elections division, which utilizes a mail-in ballot system. Ballots are mailed out to registered voters 20 days prior to the election, and voters can return their ballots in one of three ways.

First, ballots can be dropped in a mailbox (no stamp required) before 8 p.m. on election day. The county also provides a number of ballot drop-boxes where voters can return their ballots, also with an 8 p.m. deadline. Lastly, voters can take a “clear and legible” picture of their ballots and send them in via email to return.ballot@kingcounty.gov, or fax the packet to 206-296-4499 by 8 p.m. Voters who choose an electronic option must still return their paper ballot packet by mail or dropbox before November 27.

REGISTRATION GUIDELINES: Only voters who registered prior to October 10, 2017, are eligible to vote in this election. There is no same-day registration.

TRACKING RESULTS: King County will provide election results on its website once voting is over. You can also find results via local media outlets like The Seattle Times, KIRO 7, Crosscut, and KING 5. Some national elections monitoring outlets will also be covering the race, like Decision Desk HQ and Ballotpedia.

WHAT’S AT STAKE IN THE MAYORAL RACE: The city was thrown into turmoil this year when incumbent Ed Murray resigned in September after a months-long scandal surrounding several allegations of sexual assault.

Rumors of sexual misconduct have dogged Murray for decades, and in May 2017, he dropped his re-election bid after a man named Delvonn Heckard filed a civil lawsuit against him alleging that the mayor had paid him for sex when Heckard was just 15 years old. Shortly after, another man joined the lawsuit, and two more reiterated claims they had made in the 1980s that Murray paid them for sex and sexually abused them while they were living in a home for troubled teens.

Murray initially denied the allegations and ignored calls for his resignation until September, when his cousin publicly stated that Murray had assaulted him when the two were teenagers sharing a room at a family home in New York.

Murray endorsed former U.S. Attorney Jenny Durkan after dropping out of the race. Durkan won 28 percent of the vote in Seattle’s July top-two primary election; activist Cary Moon took second place at 18 percent. The two are competing to replace interim Mayor Tim Burgess, who was sworn in on September 18. 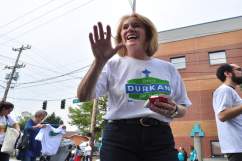 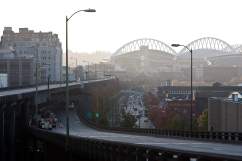