On Tuesday, Lee’s office issued a statement that said the Democratic mayor died just after 1 a.m. at Zuckerberg San Francisco General Hospital. “It is with profound sadness and terrible grief that we confirm that Mayor Edwin M. Lee passed away… Family, friends and colleagues were at his side. Our thoughts and prayers are with his wife Anita, his two daughters, Brianna and Tania, and his family.”

Lee was 43rd Mayor of San Francisco, and the first Asian America mayor in the history of the city. He is survived by his wife, Anita, and their two daughters.

1. She Met Ed in a Language-Exchange Program in Hong Kong in 1974

During the interview, Anita shared that she and Ed met through a language-exchange program in Anita’s hometown of Hong Kong in 1974. Anita was Ed’s Mandarin tutor. She tells Steinberg, “He didn’t know Cantonese until I taught him—now he’s very good!”

2. She Has Two Daughters with Ed Lee

San Francisco interim Mayor Ed Lee (L) walks with his wife Anita as he prepares to file paperwork to officially run for mayor on August 8, 2011 in San Francisco, California. Lee formally announced his intentions to run for a full term as mayor after he had promised that he wouldn’t run when he was appointed to office earlier in the year.

Anita and Ed have two daughters together– Tania and Brianna.

In an interview with Jon Brooks of KQED News in 2011, Brianna was asked, as a Chinese-American, how she feels knowing that her father is a transformative figure and one of the first to run a major city. She responded, “I feel like his position as a mayor now really shed a lot of light on a lot of the civil right work he did in the past.”

Brianna continued, “He did so much work in progressing things for the whole community before he got to this point. So, I mean, he was a transformative figure before he even got there. I think now it’s being recognized.”

At the time of the interview, Brianna was working for Need to Know, a PBS news program. Her LinkedIn states that she graduated from University of California, Berkeley, in 2007, and continued on to NYU where she received her MS in International Affairs. 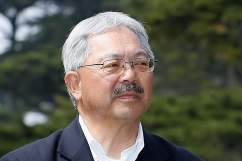 Ed Lee Cause of Death: How Did San Francisco Mayor Die?

We are shocked and saddened by the sudden death of beloved San Francisco Mayor Ed Lee. Lee leaves behind his wife, Anita and two daughters, Brianna and Tania. https://t.co/kZMRePWq29 pic.twitter.com/48br2T0rdU

According to San Francisco Mayor Willie Brown, who was close with the Lee’s, Ed was shopping at Diamond Heights Safeway when he suffered the heart attack on Monday night around 10:30 p.m. He was taken by ambulance to San Francisco General Hospital and died at 1:11 am. Brown told CBS local San Francisco, “(Lee’s wife) Anita sent him to do his family chores. He never moved away from being a husband and a father as a mayor.”

Anita joined her husband for many of his interviews on the campaign trail. In 2011, she accompanied Ed to an interview with Eater San Francisco, where the couple was asked questions over a pork bun lunch. Asked what he usually orders when it comes to Chinese food, Ed said, “Dim sum I like because I don’t have to get the same thing. I’m partial to the steamed and fried turnip. In the early years when Anita knew me, I would only order whatever pork buns they have, steamed or baked. Because I love pork buns.”

4. Anita’s Mother Instilled in Her That She Should Never Depend on Any Man

During their interview with San Francisco Magazine in 2015, Ed and Anita were asked if political ambition was something they learned early on in life.

Anita responded, “My mom told me that no matter what, you had to graduate from college and get a job, and don’t think that you can depend on any man. She told me that when I was five years old, and I told my own daughters that when they were five.”

5. Friends and Fans Have Reached out to Anita via Social Media to Express Their Condolences

Holding onto the happy memories, Mr. Mayor. Sending all my love to his beloved Anita and daughters. ❤️ pic.twitter.com/04hFTL4MoV

A number of San Francisco citizens, friends, and supporters have reached out Anita on social media to give their condolences.

Oakland sends its condolences to Anita, her daughters, and all San Franciscans today. Mayor Ed Lee served his community with passion and humility, broke historic barriers, led with a compassionate heart, and was a valued friend and colleague. He will be missed dearly.

Mayor Ed Lee, 43rd Mayor of San Francisco, dedicated his career to public service and our city. Our hearts and prayers are with his family- his wife Anita Lee + two daughters. A truly decent human being who loved a good joke, he stepped up to lead. He will be greatly missed.

At SF festival, my daughter Olivia said of Anita and Ed Lee ‘they are SO NICE.’ So true. A kind and fun couple. Such a loss. Our best thoughts to Anita and their daughters. pic.twitter.com/6DeOzA5aNq

On Tuesday morning, Supervisor Malia Cohen said, “I am utterly and totally grief stricken… My heart breaks for (Lee’s wife) Anita and the mayor’s daughters. The entire city family is grieving right now. It’s a very stressful and difficult time. We’ll get through it together. I’m in shock, it’s still hard for me to believe. I was just with him on Saturday.”

Loading more stories
wpDiscuz
0
0
Would love your thoughts, please comment.x
()
x
| Reply
San Francisco mayor Ed Lee has passed away suddenly at age 65. He was married to his wife, Anita Lee, for 37 years.