Several dangerous wildfires have broken out in California this week. The extremely dry conditions in the southern part of the state have increased the likelihood of wildfires.

Santa Paula’s Thomas Fire was the first and is the largest wildfire, currently engulfing 155,000 acres. Next, the Creek Fire, located in Los Angeles County, was reported. There are currently over 15,000 acres involved in that fire. A third fire, Santa Clarita’s Rye Fire, quickly grew to over 7,000 acres. And the Skirball Fire, has consumed about 500 acres.

These brush fires have all increased in their intensity due to the gusty winds in the area. Firefighters have been working diligently to battle these fires over the past several days. Many are becoming more manageable as the winds in the area have slowed. The Thomas Fire is still a big concern, however, as it is only 15 percent contained (as of December 10).

The National Weather Service issued “red flag warnings” for Los Angeles and Ventura Counties. These warnings were in effect through Saturday.

“The strongest and longest duration Santa Ana wind event we have seen so far this season will continue through at least Saturday. Damaging wind gusts of 45 to 65 mph will continue today across wind prone areas of Los Angeles and Ventura counties, with slightly weaker winds tonight into Saturday. These Santa Ana winds combined with humidities in the teens and single digits, along with very dry fuels, will continue to bring an extended period of critical fire weather conditions to much of Los Angeles and Ventura Counties. If fire ignitions occur, there is a high likelihood of very rapid fire spread, long range spotting, and extreme fire behavior. Other potential impacts today include downed trees and power lines, blowing dust and debris, as well as power outages.”

So far, hundreds of homes have been destroyed and thousands of people have been displaced, many being forced to evacuate as the flames tear through their neighborhoods.

Governor Jerry Brown has declared states of emergency in both Los Angeles and Ventura counties.

“It’s critical residents stay ready and evacuate immediately if told to do so,” Brown said in a statement, according to the Washington Post.

Below you will find information on some of the active wildfires in California:

The Thomas Fire is located in Ventura County. It has spread to over 155,000 acres as of Sunday, December 10. The fire started near Steckel Park, which is located at 8080 Mistletoe Road, just off of Highway 150. The Thomas Fire is just 15 percent contained at this time.

Evacuation centers have been set up at the Ventura County Fairgrounds at Miners Building at 10 W Harbor Blvd. in Ventura and at Nordhoff High School at 1401 Maricopa Highway in Ojai. 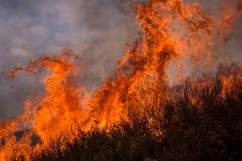 The Creek Fire is located in Los Angeles County. It has spread to over 15,000 acres as of Sunday, December 10, according to the latest update from CAL Fire. The fire is currently 90 percent contained.

Evacuation centers have been set up at the Sylmar Recreation Center, 13109 Borden Ave., and Sunland Senior Center, 8640 Fenwick Street, both of which accept small pets. 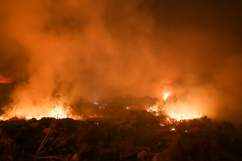 The Rye Fire is located in Los Angeles County. As of Sunday, December 10, over 6,000 acres were burning with 90 percent containment. 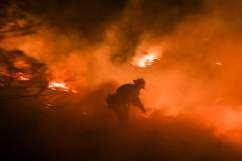 The Skirball Fire is located at N. Sepulveda Blvd. at I-405 in Los Angeles County. According to the Los Angeles Fire Department’s website, there are currently 421 acres burning in this fire. It is 75 percent contained.

Mandatory evacuations have been issued in Bel Air. The 405 Freeway in Bentwood has also been closed as crews try to contain this blaze. 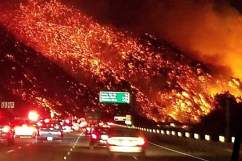 The Lilac Fire is located off Old Highway 385 at Dulin Road in San Diego County. It is currently estimated to be about 4,100 acres with 60 percent containment.

Mandatory evacuations have been ordered in the area of W. Lilac Road and Sullivan Middle School. Evacuation warnings are in effect for areas north of Pala Road, south of Reche Road, west of I-15 Freeway, east of Green Canyon Road and W. Mission Road.

Evacuation shelters have been set up at Fallbrook High School, Pechanga Casino, and Pala Casino. 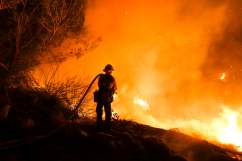 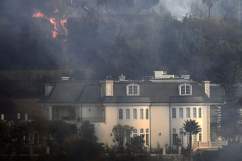 Celebrities Forced to Evacuate Due to Wildfires in California Today

Read More
California, Fires
Here is a map that shows all of the wildfires currently burning in California.