Police in Aztec, New Mexico, have released the names of the two students who died in yesterday’s shooting at Aztec High School: Casey Jordan-Marquez and Francisco Fernandez. Here’s five things to know:

1. Jordan-Marquez and Fernandez Were Both Student Athletes

Though 21-year-old William Atchison has been identified as the shooter, it is not yet known what motivated him to disguise himself as a student, enter the campus and start shooting. Both of his victims were student athletes, however. Casey Jordan-Marquez was captain of the school cheerleading team, and Francisco Fernandez played on the school’s football team.

The two students, plus their killer, were the only fatalities. Police confirmed that nobody else was injured.

Jordan-Marquez was a senior and Fernandez, who recently transferred to Aztec High from a different school, was a junior.

2. Fundraising Pages Have Been Set up for Both Victims’ Families

Shortly after the shooting, family members of the victims set up fundraising pages to help offset funeral costs and other expenses. The GoFundMe page for Casey Jordan-Marquez listed an initial goal of $2,500 (already surpassed as of press time), and the one for Francisco “Paco” Fernandez has the goal of $15,000 (with roughly two-thirds of that collected by press time).

There is also a YouCaring page for Jordan-Marquez.

3. Police Still do not Know the Murderer’s Motivation

School shooter William Atchison was white, whereas the two students he shot and killed were both Latino. Whether this is merely a coincidence or if racism (or some sort of anti-athlete bias) played a role in Atchison’s motivation is not yet known.

Investigators say that on the morning of Dec. 7, before the shooting, Atchison went on social media and posted (certain NSFW vowels replaced by asterisks):

If things go according to plan, today would be when I die.
I wait until the school buses are detected, then head out on foot disguised as a student.
I go somewhere and gear up, then hold a class hostage and go apesh*t, then blow my brains out.
Work sucks, school sucks, life sucks.
I just want out of this sh*t.
F*ck this state, it really is bad. Think I’m insane? I’m actually more rational, peaceful and less loony than a majority of the citizenry of this entire region.

Investigator also found, in a trash can at Atchison’s home, a piece of paper with a hand-scrawled timetable ending with “8 [o’clock] die.”

4. Aztec Schools Closed on Friday, After a Candlelight Vigil the Night Before

Thankful for the actions of educators, students and law enforcement as we pray for the community of Aztec High School: https://t.co/uj0NTmKvjd

Casey Jordan-Marquez’s grandfather, who attended the vigil, said his granddaughter would ” love to see everybody here… To come see her. She loved everybody. If anybody was down, she was always there to try to bring them up.”

All schools in Aztec, New Mexico (not merely the high school) stayed closed on Friday, according to KOB-4 news. However, grief counselors were made available at the middle school from 9 in the morning through three in the afternoon (New Mexico time).

5. Jordan-Marquez and Fernandez Were Murdered Outside of Their Classrooms

Casey Marquez and Francisco Fernandez. Say their names. Do not forget them. Then text ‘JOIN’ to 644-33 and fight to #EndGunViolence. @MomsDemand #RejectTheNRA #Enough #NotOneMore #AztecSchoolShooting pic.twitter.com/D3CBsDb0hk

Aztec High and other school in the area immediately went on lockdown as soon as the shooter’s presence was known. According to KMBZ news, when Atchison disguised himself as a student and entered the school, he went into a bathroom in hope of confronting students there. Francisco Fernandez was shot and killed in that bathroom; authorities said he had no chance of surviving the shot.

Atchison then left the bathroom and roamed the hallways, where he saw and fatally shot Casey Jordan-Marquez. He allegedly fired several additional shots in the hallway afterwards. 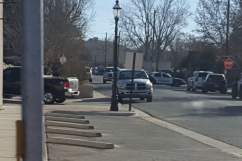