Arizona Congressman Trent Franks resigned on Thursday after learning the House Ethic Committee was investigating him for asking female subordinates to carry a surrogate pregnancy for him (and, possibly, for alleged retaliation after they said no). Franks is married to Josephine, and has two children. Here’s five things to know:

1. She Immigrated to America From the Philippines

Trent and Josephine Franks have been married since 1980. The Philippine Embassy, in a 2012 press release praising Rep. Franks for supporting joint maritime security and counterterrorism activities between the Philippines and the US, mentioned that “Representative Franks is married to Mrs. Josephine Franks, an American of Filipino descent.”

The Franks were mentioned in a 2013 Fox News report on Latinos serving in Congress. (Rep. Franks is not Latino but was a member of the COngressional HIspanic Conference because, as his then-spokesman Ben Carnes said, he “considers the Hispanic community a critically important part of the pro-family, pro-freedom, conservative coalition in America.” Carnes added that Franks’ wife “is an immigrant and speaks the better part of four languages, one of which is Spanish.”

2. She Taught Toddler Sunday School Classes for Over Two Decades

https://twitter.com/RepTrentFranks/status/900034351496396800
Josephine Franks is a private person, especially by the standards of political spouses; little is known about her beyond the tidbits appearing in her husband’s official House of Representatives biography, mentioned by her husband’s spokespeople, and similar sources.

Trent Franks’ House biography says that “Trent and his wife Josephine worked as Sunday School teachers for the one and two year olds in their Church Preschool Department for nearly 22 years.” The family attends North Phoenix Baptist Church.

3. The Franks’ Children Were Carried by a Surrogate

https://twitter.com/RepTrentFranks/status/735579781002104832
Trent Franks’ House of Representatives biography ends with this sentence: “After struggling to have children of their own for more than two decades, Trent and his wife Josie are now the deeply grateful parents of two precious Gifts of God; eight-year-old twins, Joshua Lane and Emily Grace.”

Apparently Josephine Franks was unable to have biological children, for in 2008 the Franks had children conceived through in vitro fertilization with a donor egg, and carried by a surrogate.

Full statement from @RepTrentFranks on leaving congress after Ethics Committee launched an investigation into asking two female staffers about becoming surrogates for his children. pic.twitter.com/NVpZbgAOUt

In the statement Trent Franks released explaining his congressional resignation, he said that “My wife and I have long struggled with infertility. We experienced three miscarriages. We pursued adoption on more than one occasion only to have adoptive mothers in each case change their mind …. a wonderful and loving lady. to whom we will be forever grateful, acted as a gestational surrogate for our twins.”

In his resignation statement, discussing his twin children, Trent Franks said that “The process by which they were conceived was a pro-life approach that did not discard or throw away any embryos.”

However, an August 2013 Huffington Post op-ed headlined “Trent Franks Killed a Limited Number of His Own Unborn Children” quoted Franks as saying “a trusted friend told us of a medical organization that would allow us to pursue a surrogacy effort where a limited number of eggs would be fertilized and no embryos would be discarded.”

This implies that Franks considers a “fertilized egg” distinct form an “embryo” and yet, as the Huffington Post columnist pointed out, “Trent Franks’ website says that the congressman believes: ‘Human life commences with fertilization, cloning, or its functional equivalent.’ And he also cosponsored the Life At Conception Act, that says: ‘the right to life guaranteed by the constitution is vested in each human being’ and defines a human being as: ‘… species homo sapiens at all stages of life, including, but not limited to, the moment of fertilization…’ Obviously there’s nothing wrong with in vitro fertilization. But let’s follow Franks’ logic. If fertilized eggs are human lives, then Trent Franks and his wife went to a clinic and paid to have their babies aborted — kind of an “abortion clinic” — just when the pre-humans were at their tiniest and most helpless, practically still oven-fresh from their executioners’ gonads. Just a limited number, of course.”

The Center for Male Reproductive Medicine and Vasectomy Reversal has, on its website, a .pdf copy of a testimonial written by Trent Franks on “Committee to Re-Elect Trent Franks to Congress” letterhead.

The “To whom it may concern” letter endorses Dr. Phillip Wertman because “Where others had failed on multiple occasions, Dr. Wertman succeeded on the very first attempt …. The results of this effort are personified by two of the most beloved of all children, Joshua Lane Franks and Emily Grace Franks.”

The letter also includes a couple of phrases which later appeared in Rep. Franks’ congressional resignation statement, specifically mention of “a surrogacy effort where a limited number of eggs would be fertilized and no embryos would be discarded.” 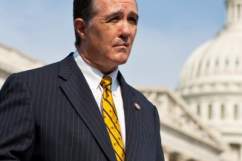 Loading more stories
wpDiscuz
0
0
Would love your thoughts, please comment.x
()
x
| Reply
Rep. Trent Franks is resigning from Congress due to his years-ago request that female subordinates carry his surrogate pregnancy. His wife Josephine was unable to carry a pregnancy to term.