Washington State Police/Twitter The scene of the Amtrak train derailment in Washington.

The mayor of one Washington city warned about the danger of a new “high-speed” Amtrak Cascades train service just weeks before a derailment occurred during the first run of the new line.

On December 18, Amtrak train 501 derailed, sending train cars down onto Interstate 5 in Dupont, Washington, between Olympia and Tacoma. The Pierce County Sheriff says the crash resulted in fatalities and injuries, but it is not yet known how many people were killed and wounded. About 75 to 80 people were onboard when the train derailed.

At a December 5 city meeting, Mayor Don Anderson told Washington Department of Transportation officials that he believed it would be just a matter of time before the high-speed trains kill someone, according to KOMO-TV. He said he believed the trains are too close to cars and pedestrians. Anderson was concerned that there were not grade separations along some parts of the line to keep the trains away from cars. The cause of Monday’s derailment is not yet known.

“Come back when there is that accident, and try to justify not putting in those safety enhancements, or you can go back now and advocate for the money to do it, because this project was never needed and endangers our citizens,” Anderson said at the meeting.

You can watch the video of the mayor’s comments below:

Anderson could not be immediately reached by Heavy for comment on his reaction to the derailment. But he told MSNBC, “Our community has been very concerned about the safety of this modification of the rail route for several years and were unsuccessful in either stopping it or having some modifications.”

Lakewood is located about 20 minutes north of Dupont, where the derailment occurred. According to KOMO, the new Amtrak Cascades line was expected to save time for commuters by rerouting trains off of the BNSF Railway main tracks near Point Defiance and along southern Puget Sound. The new route takes trains onto a bypass line along Interstate 5, which was already being used by Sound Transit for Sounder commuter rail service. Track upgrades would allow the Amtrak trains to move through at 79 mph.

We came across this warning sign at the Lakewood station. The testing is underway now, but we'll see high-speed trains start regular trips with passengers by the middle of the month #komonews pic.twitter.com/adKdgNNSw8

The debut of the Point Defiance Bypass was highly anticipated. Local news crews were covering the departure of the first train.

“People can get where they’re going sooner, with more schedule choices and better reliability,” said Ron Pate, WSDOT Rail, Freight and Ports Division director, in a press release in October. According to the Washington DOT:

This permanent change to the Amtrak Cascades schedule means travel time between the two cities will be reduced by 10 minutes to 3 hours and 20 minutes, thanks to the rerouting of trains between Tacoma and Olympia and the upgrading of tracks and signal systems. The new route takes trains on an inland corridor parallel to Interstate 5 through Tacoma, Lakewood, Joint Base Lewis-McChord, and DuPont. It eliminates a major chokepoint for passenger trains near Point Defiance in Tacoma and separates them from freight trains that will continue to use the old waterfront route. The results are shorter travel times and greater on-time reliability.

“WSDOT worked closely with many partners over the last six years to prepare for these new schedules. Dec. 18 marks a major milestone for passenger rail service in the Pacific Northwest,” Pate said. “While the scenic beauty of the Point Defiance route can’t be denied, we know passengers will appreciate the ability to make easier, and more reliable, day trips between Seattle and Portland. Spectacular water views are still available for passengers between Seattle and Vancouver, British Columbia.”

The DOT said the trains would be pulled by new Charger locomotives, leaving both Portland and Seattle every two to three hours. The first trains left Seattle at 6 a.m. and Portland at 6:20 a.m.

“We want to make sure as many people as possible understand what’s going on, understand we are starting a new service on December 18th and ensure that they know how to stay safe around the railroad tracks,” Janet Matkin, of the WSDOT, told the Lakewood officials.

And others, like Joint Base Lewis-McCord, had been putting out public services notices in recent days to alert locals about the new service.

The derailment occurred about 7:40 a.m.

“Amtrak is aware of an incident with Train 501, Cascades service from Seattle to Portland. Emergency services are on the scene and Amtrak management is responding. Some injuries are reported,” Amtrak said in a statement. “Amtrak service south of Seattle is temporarily suspended. Service from Seattle to points north and east is continuing to operate.”

The Washington DOT said in a statement, “The Amtrak Cascades train service is jointly owned by the Washington State Department of Transportation and the Oregon Department of Transportation. Amtrak operates the service for the two states as a contractor, and is responsible for day to day operations. Amtrak Cascades runs trains from Vancouver, British Columbia, to Eugene, Oregon.

“The tracks, known as the Point Defiance Bypass, are owned by Sound Transit. The tracks were previously owned by BNSF and were used for occasional freight and military transport. WSDOT received federal grants to improve the tracks for passenger rail service. As owners of the corridor Sound Transit managed the track upgrade work under an agreement with WSDOT. Funding for the upgrades was provided by the Federal Railroad Administration, which reviewed work throughout the duration of the contract. Today was the first day of public use of the tracks, after weeks of inspection and testing,” the DOT said. 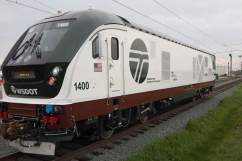