Michael Flynn on Friday became the first member of President Donald Trump‘s administration to be charged and plead guilty in relation to Special Counsel Robert Mueller’s investigation. Flynn reached a plea deal with prosecutors and pleaded guilty to lying to the F.B.I. about conversations he had with the Russian ambassador in December 2016 during Trump’s presidential transition.

Flynn appeared in federal court Friday in Washington D.C. to plead guilty, and it’s the latest indication that he is now cooperating with Mueller’s investigation into Russian interference during the 2016 presidential election. The New York Times reported that his plea agreement suggests that he gave valuable information to prosecutors, which could help move the probe forward.

ABC News later reported that Flynn promised “full cooperation to the Mueller team” and is preparing to testify that Trump directed him to initiate contact with the Russians during the presidential campaign.

Flynn was in court for about one hour Friday and re-emerged to swarms of people and media members. He, nor his representatives, answered any questions outside the courthouse, but he released an official statement following the hearing.

In the statement, Flynn said he recognized that the actions he admitted in court “were wrong,” adding that he was “working to set things right.”

“My guilty plea and agreement to cooperate with the special counsel’s office reflect a decision I made in the best interests of my family and our country,” Flynn said. “I accept full responsibility for my actions.”

Flynn is the fourth associate of Trump to be charged after he allegedly misled investigators about discussions that he had with the Russian ambassador to the U.S., Sergey I. Kislyak. Lying to the F.B.I. typically carries a prison sentence of up for five years. But because of the plea deal, it appears Flynn may avoid jail time.

Investigators learned that Flynn and Jared Kushner took the lead in efforts to lobby other countries to assist Israel. Court documents indicate that in another discussion, Flynn asked Kislyak to tell Moscow to “refrain from escalating the situation in response to sanctions announced by the Obama administration” in relation to its interference during the presidential election, The Times reported.

It wasn’t until recently that Flynn and his lawyers told Trump’s legal team that they could no longer discuss Mueller’s investigation, as they had been doing. That was a sign that Flynn was cooperating with investigators, and his plea deal Friday further indicated that.

Flynn announced that he was resigning from his position as national security adviser to Trump after just 24 days — February 13. It was revealed that he knowingly misled Vice President Mike Pence about the conversations he had with Kislyak.

The federal charges against Flynn come just over one month after an indictment was issued by the Department of Justice against Paul Manafort and his associate, Rick Gates. The charges indicated that Manafort and Gates lobbied the U.S. government on behalf of a foreign nation, and the two lied to the feds about it, laundering massive sums of money in the process. 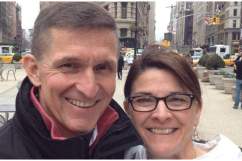 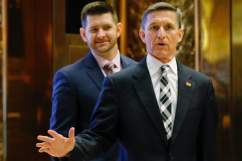 Read More
Donald Trump, Politics, US Politics
Michael Flynn released a statement regarding the plea deal he reached for lying to the FBI. Read the full statement, where he admits to doing wrong.