Aaron Nobel The scene at the Port Authority.

A terror suspect possibly influenced by ISIS set off a botched explosion that rocked the Port Authority in New York City, which is heavily used by commuters. Reports say the suspect is a suicide bomber of Bangladeshi origin, who had a low-tech device attached to his body, possibly with velcro and zip ties.

The suspect was identified as Akayed Ullah. “This was an attempted terrorist attack,” New York’s mayor Bill DeBlasio said. He’s in custody after being injured in the attack. It’s believed the device malfunctioned, according to CBS News.

The explosion occurred around 8:20 a.m. on December 11. It comes not long after Sayfullo Saipov is accused of ramming a car into bicyclists in lower Manhattan, killing multiple people. However, despite some injuries, there appear to be no casualties at the Port Authority scene. “The NYPD is responding to reports of an explosion of unknown origin at 42nd Street and 8th Ave, #Manhattan. The A, C and E line are being evacuated at this time. Info is preliminary, more when available,” reported The New York Police Department.

1. The Suspect Was Inspired by ISIS, Sources Told the New York Post

The scene at the Port Authority.

2/ The suspect has been identified by police as a 27-year old of Bangladeshi descent with a last known address in Brooklyn. His name is Akayed Ullah. Already pro-ISIS channels are celebrating him as an “istishadi” attacker. pic.twitter.com/IkrO6kZm7E

The Post identified the man who is possibly of Bangladeshi origin who is 27 and was living in Brooklyn. Former NYPD Commissioner Bill Bratton told MSNBC that preliminary information suggested that Akayed may have been from Bangladesh and has been living in the United States for about seven years. 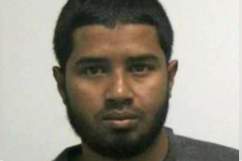 2. Video Appears to Capture the Moment of the Explosion & The Suspect Was Wearing the Device

Surveillance video shows the moment the possible “suicide bomber” detonated a “pipe bomb” in New York City’s Port Authority terminal Monday morning during rush hour. Akayed “suffered burns and other wounds and is currently in the hospital,” according to CNN.

“Preliminary investigation at the scene indicates that this male was wearing an improvised low-tech explosive device attached to his body. He intentionally detonated that device,” the New York Police Commissioner said. “There are no known additional incidents or activities…You will see additional NYPD presence throughout the city,” the mayor said in a news conference shortly after the attack.

3. No One Was Killed in the Explosion

Aaron Nobel/HeavyPolice near the Port Authority in New York City after the explosion.

According to the New York Fire Department, four people were injured. That includes the attacker. No one was killed. “A total of 4 injuries reported at the scene of an explosion at Port Authority. All injuries are non-life-threatening,” the NYFD reported on Twitter.

“There are also no credible and specific threats against New York City at this time. But we will give you more information, of course, as the investigation unfolds,” New York’s mayor said. “The first responders, responded brilliantly. Now the mission of the NYPD is to secure all major transit hubs and major sites in this city. So you’ll see expanded NYPD presence today all over the city.”

4. Dramatic Photos Appeared to Show the Suspect on the Ground

A photo of what may be the suspect has been circulated on Twitter, although its verification is not completely clear. According to CBS News, the device was “crudely assembled” and the attack occurred “in the underground walkway between Times Square and the Port Authority Bus Terminal.”

According to CBS News, the other people injured were in good enough shape to transport themselves to the hospital, and they reported concerns such as ringing in the ears. The New York Fire Department wrote on Twitter: “EMS removed perpetrator to Bellevue Hospital. 3 people in proximity to the explosion removed themselves, all have minor injuries consistent with being in area of an explosion.”

Port Authority Police watch as people evacuate after a reported explosion at the Port Authority Bus Terminal on December 11, 2017 in New York.

The Port Authority is a busy transit hub for commuters, and it was evacuated after the explosion, according to The New York Times. The attack occurred during rush hour in Manhattan.

According to The New York Post, the suspect “had wires attached to him and a 5-inch metal pipe bomb and battery pack strapped to his midsection as he walked through the Manhattan transit hub.”