California’s Thomas Fire has grown to an astounding 237,500 acres and is only 25 percent contained, according to the latest update from Cal Fire.

The Thomas Fire is affecting both Santa Barbara and Ventura counties. It is currently “moving north and west toward the Santa Ynez mountain range away [from] populated areas,” according to the Los Angeles Times.

The fire began on December 4, and has grown massively over the past nine days. There are currently 18,000 structures in danger of being burned. A total of 709 single family homes have been destroyed and an additional 164 have been damaged in this blaze.

Hundreds of firefighters are working hard to combat the Thomas Fire, and are doing the best they can to contain it. On December 14, Cal Fire confirmed that one firefighter was killed while battling the flames. He has been identified as 32-year-old Cory Iverson.

“This fire is a beast and you’re gonna kill it. I have no doubt,” Santa Barbara County fire division chief Martin Johnson told fire crews.

A cause of the Thomas Fire is still unknown.

A CAL FIRE map shows the burn area of the Thomas Fire as of this morning. More info on the fire here: https://t.co/HAdAndxnFU pic.twitter.com/jN2uqMkyf2

City of Ventura – North of Foothill Road from Day Road to Kimball Road.

Ventura County: North Coast Area
Boundary of Highway 33 on the north to Casitas Vista Road, northwest to Hwy 150, Hwy 150 (Casitas Pass Road) west to US 101 and south on US 101 (including Pacific Coast Highway) to Emma Wood State Beach.

Evacuation centers have been set up at Ventura County Fairgrounds at the Miners Building, the Oxnard College Gymnasium, and at UCSB.

Those needing to get their animals to safety should go to the Ventura County Fairgrounds located at 10 W Harbor Boulevard in Ventura.

Another Red Flag Warning has been issued by the National Weather Service. Because conditions in the southern California area are extremely dry with strong, steady winds, the chances of a wildfire starting and/or rapidly spreading are high. The current Red Flag Warning is in effect until Saturday, but could be extended.

“A Red Flag Warning is issued for weather events which may result in extreme fire behavior that will occur within 24 hours. A Fire Weather Watch is issued when weather conditions could exist in the next 12-72 hours. A Red Flag Warning is the highest alert. During these times extreme caution is urged by all residents, because a simple spark can cause a major wildfire. A Fire Weather Watch is one level below a warning, but fire danger is still high.” 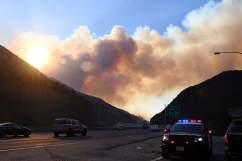 Loading more stories
wpDiscuz
0
0
Would love your thoughts, please comment.x
()
x
| Reply
The Thomas Fire has grown to 237,000 acres with 25 percent containment. A new Red Flag Warning could cause the fire to grow even more.