Akayed Ullah is in police custody after authorities say he detonated an explosive device in an attempted terror attack during rush hour Monday morning in an underground subway station near the Port Authority bus terminal and not far from bustling Times Square.

Ullah, a 27-year-old from Brooklyn, was injured in the blast, which occurred about 7:20 a.m., but is expected to survive, officials said at a press conference. He was taken to Bellevue Hospital where he is being interviewed by investigators. Bystanders were injured in the explosion, but none of the injuries are serious, authorities said.

The suspect is originally from Bangladesh and was inspired by ISIS, according to The Associated Press. The so-called Islamic State has called for its supporters to carry out attacks in New York City during the busy holiday season.

The New York Police Department arrived on the scene shortly after the explosion. Officers thoroughly searched the terminal to see if there were any other devices. The A, C, and E subway lines were evacuated, but the public transportation system has since resumed to normal. Police say that Ullah acted as a “lone wolf” and that no other threats to the public were found.

Anyone with information on this attack or on the suspect is asked to call the Terror Hotline at 888-NYC-SAFE.

1. Akayed Ullah Has Been Charged on 5 Counts

Ullah has been charged with five counts, including providing material support to a terrorist group and use of weapons of mass destruction. He has been accused of “detonating a crude pipe bomb strapped to his chest while walking through a Port Authority tunnel Monday morning,” according to the New York Daily News.

Ullah is still recovering from wounds he suffered in Monday’s blast. He will more than likely be arraigned from his hospital bed this week.

Although the Port Authority police filed the charges, the case is expected to be taken over by the U.S. Attorney’s office.

2. Ullah Was Wearing an ‘Improvised Explosive Device’ Fixed to His Body With ‘Velcro & Zip Ties’

Police took 27-year-old Akayed Ullah into custody shortly after the explosion was reported. Police Commissioner James O’Neill said that Ullah was “wearing an improvised explosive device” when he was located. It was affixed to his body “with velcro and zip-ties,” according to O’Neill.

Photos and videos of Ullah lying on the ground have surfaced online. Based on the apparent extent of his injuries — which are not believed to be life-threatening — experts believe that something went wrong with Ullah’s plan to carry out this attack. Authorities believe that the device “did not fully detonate.”

The suspect also had a second device with him.

First responders found Ullah “with burns and wounds to his body and the preliminary investigation at the scene found the individual was wearing a low tech explosive device attached to his body,” New York City officials said during a press conference. Sources told CNN that they saw the suspect being taken away from the scene on a stretcher. He was transported by ambulance to Bellevue Hospital.

Early reports indicated that the suspect had died, but police have confirmed that he is alive.

You can see surveillance footage from the scene in the video below. The blast left Ullah laying on the ground.

3. Ullah Is From Bangladesh & Has Lived in the States for 7 Years

Former NYPD Commissioner Bill Bratton told MSNBC that preliminary information suggested that Ullah may have been from Bangladesh and that he has been living in the United States for about seven years. This information has since been confirmed.

Ullah lived in the East Flatbush area of Brooklyn. Police arrived at his home shortly after identifying him and were able to find out some additional information.

SEE IT: Photos personnel on scene near the suspects house in Brooklyn that injured at least 2 in Manhattan, pic.twitter.com/JhY0t3Sbvz

“Investigators scouring Ullah’s Brooklyn home turned up a passport in his name with multiple handwritten notes, including ‘O AMERICA, DIE IN YOUR RAGE.’ The investigators also found metal pipes, Christmas light fragments and screws that matched the items used in the crudely-constructed bomb found at the scene,” reports the New York Daily News.

In addition, sources tell CNN that Ullah told investigators that he made the explosive device while he was at work.

“Investigators briefly spoke to the suspect who told them he made the explosive device at the electrical company where he works,” read a tweet from the New York City Alerts Twitter page. Further details about what he did for a living weren’t immediately available, but it has been reported that he used to be a cab driver.

As far as a motive goes, a source told the New York Post that Ullah told investigators that he wanted to “do damage” as revenge.

“They’ve been bombing in my country and I wanted to do damage here,” Ullah said, according to sources.

“Trump you failed to protect your nation,” read the post. Prosecutors say that the message “was written with ISIS in mind.”

4. The Explosion Happened in an Underground Passageway & Injured 3 People

The explosion occurred near the Port Authority bus terminal in Midtown Manhattan. The passageways that connect the subway system underground tend to be very busy and an attack in these areas could have a catastrophic impact.

The Fire Department of New York located the detonated device between the A and 1 trains.

According to CNN’s live broadcast, this location was not the intended target. Authorities have reason to believe that Ullah had other — perhaps more extensive — plans, but that the device either malfunctioned or detonated prematurely for some reason.

At least one witness told CNN that he heard more than one explosion.

“From what I saw it sounded like it came from the subway, but I’m just guessing. It was two distinct explosions seconds from each other. As I was making my way toward the outside, I kept getting shoved by cops and there were cops at every entrance blocking and there was police and SWAT everywhere. It was scary. It was just a lot of chaos but I didn’t see any injuries,” Francisco Ramirez told CNN.

There have been several conflicting reports about injuries in this incident. At first, it was reported that two people were injured. A short time later, the NYPD tweeted that there weren’t any other injuries reported besides the suspect. Less than an hour later, FDNY sent out the following tweet.

Update: A total of 4 injuries reported at the scene of an explosion at Port Authority. All injuries are non-life-threatening

The suspect and three other people have been seen at nearby hospitals. None of these injuries are said to be life-threatening. The three people who sought medical attention have experienced “ringing in the ears” and headaches. According to CBS New York, these three people transported themselves to the hospital and didn’t require medical attention at the scene.

5. ISIS Supporters Have Been Celebrating the Attack on Social Media

The New York Police Department has confirmed that this incident was indeed terror-related. According to The Associated Press, it is not believed that Ullah had any direct contact with ISIS.

However, Former NYPD Commissioner Bill Bratton did tell MSNBC that Akayed “was setting the device off in the name of ISIS.” NYPD made mention of this during this morning’s press conference, but did not confirm exactly what Ullah might have said.

“Already pro-ISIS channels are celebrating him as an ‘istishadi’ attacker,” Callimachi tweeted in part. “Istishadi” means “suicide bomber.” You can see more from Callimachi below.

“After every attack where the casualties are few, I see misinformed people labeling it a “failed terror attack” and theorizing ISIS won’t claim it because it was botched. Let’s be clear: This man walked into Times Square wearing a bomb. That is not a fail in ISIS’ eyes … All you need to do to understand what ISIS claims is look at their history. They claim anything that propagates terror / fear, regardless of whether most would label it as ‘failed.’ The key dynamic here is not the notion of failure. Again for ISIS, a man slipping into 1 of the most guarded areas of the world wearing a bomb is a success. Rather, the issue is that the bomber is in custody. And generally, ISIS doesn’t claim when their man is in handcuffs.” 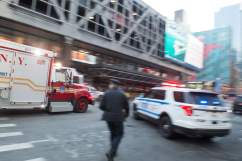 Loading more stories
wpDiscuz
0
0
Would love your thoughts, please comment.x
()
x
| Reply
A man named Ullah Akayed was arrested in New York City after police say he detonated some kind of bomb underground. Here is everything you need to know.