In emotional moment on @TheView, Joe Biden consoles Meghan McCain, whose father was diagnosed with same cancer Biden's late son Beau had. "There is hope. And if anybody can make it, your dad [can]." pic.twitter.com/tQUy11X5sV

McCain broke down crying while discussing her father’s cancer diagnosis, tearfully admitting how worried she is about her father. Biden, who had been sitting in the middle of the table, left his seat to walk over to McCain and take her hand. He told her “One of the things that gave Beau courage, my word, was John, your dad…. your dad became friends with Beau. And Beau talked about your dad’s courage. Not about his illness, his courage.” Biden also discussed promising new developments in cancer treatments.

“There is hope,” Biden said. “And if anybody can make it, your dad–her dad is one of my best friends.” (The audience applauded enthusiastically.) “Her dad goes after me hammer and tongs,” Biden said. “We were like two brothers who somehow were raised by different fathers or something because of our points of view. But I know, and I mean this sincerely, her dad got mad at me, he told me I should get the hell off the ticket. And you remember what I said? And I mean this sincerely, I know that if I picked up the phone tonight and called John McCain and said ‘John, I’m at Second and Vine in Oshkosh and I need your help. Come.’ He would and I would for him too.” The audience applauded again.

Joe Biden’s son Beau was 46 years old when he died of brain cancer on May 30, 2015. He was diagnosed in 2013, and initially seemed to respond well to surgery, chemotherapy and radiation treatments, returning to his job as Delaware’s Attorney General and even floating plans to run for governor in 2016. But Biden’s cancer returned in the spring of 2015, and he died shortly thereafter.

Senator John McCain was diagnosed with brain cancer in July 2017; a tumor was discovered after McCain underwent a minor surgical procedure to remove a blood clot from above his left eye.

John and I have been friends for 40 years. He's gotten through so much difficulty with so much grace. He is strong – and he will beat this.

Biden responded to news of McCain’s diagnosis by immediately taking to Twitter, saying “John and I have been friends for 40 years. He’s gotten through so much difficulty with so much grace. He is strong – and he will beat this.” 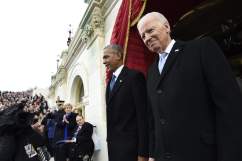 Loading more stories
wpDiscuz
0
0
Would love your thoughts, please comment.x
()
x
| Reply
On an emotional episode of The View, Joe Biden consoled a crying Meghan McCain, whose father John was diagnosed with the same type of cancer that afflicted Biden's late son Beau.