December is here and ’tis the season to be snarky, so it’s no surprise that Twitter amused itself by turning #XmasGiftsFromTrump into a trending hashtag, inspired by a request from @2GirlsAndATag: “Ho-Ho-No…it’s Trump’s first Christmas as POTUS. What kind of presents do you think he’ll be giving this year? Let’s play: #XmasGiftsFromTrump.”

Ho-Ho-No…it’s Trump’s first Christmas as POTUS. What kind of presents do you think he’ll be giving this year? Let’s play:#XmasGiftsFromTrump

The president’s longtime anti-fans found plenty of fodder to work with, ranging from his recent antics to his longtime personality traits. Here are some of the funniest ones.

Of course the president’s advisers and appointees came in for criticism, such as this jab at Attorney General Jeff Sessions for reputedly looking like a Keebler Elf:

You don’t have to miss Sean Spicer to miss Melissa McCarthy’s portrayals of him:

Another frequent theme alluded to the legal troubles of certain people who are or were close to the president:

A Pardon in a Pear Tree #XmasGiftsFromTrump

Water bottles featured in more than one popular tweet, alluding to Trump’s bizarre 2013 criticism of Marco Rubio for pausing during a speech to sip water–thus inspiring mockery when Trump himself did the same thing last month.

This meme recalls the president’s legendary lack of humility:

Nowadays the Secret Service detail around the POTUS would prevent any such situation from recurring:

The president of the United States in his younger, spryer days:

The president of the United States now:

An empty box with a note that says…

“I was going to give you the BEST present, but the Obstructionist Democrats blocked it! Sad.”#XmasGiftsFromTrump pic.twitter.com/eFmFSrUPHF

Trump is known not merely for having somewhat small fingers for a man his size, but for being rather sensitive about it, which naturally inspired a slew of small-fingers jokes:

Though the hashtag initially trend due to Trump’s enthusiastic critics, eventually his MAGA fans joined in. Here’s a sampling of a few popular offerings from fans of the president:

Thank You @realDonaldTrump for never giving up the fight. #Christmas came early for all Deplorables 2016 and officially #inauguration 2017
The winning continues…..#Trump2020#XmasGiftsFromTrump pic.twitter.com/nlh2A3o4e4 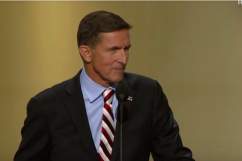 WATCH: Michael Flynn Then & Now “Lock Her Up/Lock Him Up”