As the East coast prepares for their first big snowstorm of the winter season, the term “bomb cyclone” is being used to describe the weather system that is approaching. But what exactly is a “bomb cyclone”?

The definition is fairly simple. A “bomb cyclone” occurs when a storm’s pressure drops so quickly that there is “explosive strengthening.” As you can probably imagine just based on the name, a “bomb cyclone” is a very serious, often severe weather system. The term “bomb” is actually short for “bombogenesis.” The National Ocean Service provides more of a technical definition.

“Bombogenesis, a popular term used by meteorologists, occurs when a midlatitude cyclone rapidly intensifies, dropping at least 24 millibars over 24 hours. A millibar measures atmospheric pressure. This can happen when a cold air mass collides with a warm air mass, such as air over warm ocean waters. The formation of this rapidly strengthening weather system is a process called bombogenesis, which creates what is known as a bomb cyclone.”

Meteorologist Ryan Maue says that this storm, which is set to slam New England on Thursday, will have “pressure as low as [Hurricane] Sandy & hurricane [force] winds.” And Maue is absolutely right. A “bomb cyclone” can have winds strong enough to take down trees and power lines. It can also cause structural damage, not unlike a hurricane.

“I’ve seen a lot of names (some made up) to describe the storm off the East Coast. The ‘Bomb’ verbiage originates from the term Bombogenesis. When a low pressure system goes through bombogenesis it is said to have ‘bombed out,'” explains WTSP meteorologist Grant Gilmore.

Although several New England states are set to get pummeled with their first real plowable snow this season, the most intense portion of this storm will remain over the Atlantic, perhaps sparing states like Massachusetts, Rhode Island, and Connecticut from one of the worst blizzards they’ve seen in years. If the storm came in closer to the coast, this storm would be far more than a typical snow event. The wind alone would prove to be a challenge, and widespread power outages would be almost guaranteed. There could also be serious damage to homes, buildings, and on roadways. Depending on how bad the wind was, it could prohibit plow trucks from getting out on the streets and doing their jobs. Thankfully, it does sound like this “bomb cyclone” will be spending most of its time in the frigid water, right off the coast, but that doesn’t mean that the approaching storm isn’t serious.

The National Weather Service posted the following warning about this weather system.

“Arctic air mass will remain entrenched over the eastern two thirds of the country through the end of the week. Very cold temperatures and dangerously cold wind chills expected.”

The weather system that will arrive in New England on Thursday, has already brought some snow to areas where snow is extremely rare. In fact, the state of Florida has seen some flakes flying from this storm. Although the Sunshine State hasn’t gotten more than a dusting, it’s the first time that some areas have seen snow in decades. 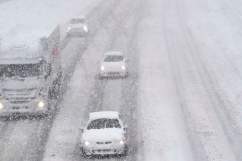 Loading more stories
wpDiscuz
0
0
Would love your thoughts, please comment.x
()
x
| Reply
A 'bomb cyclone' is a term used to describe a storm that's pressure drops at a rapid speed.