JUST IN: Video of ~100 car pileup on I-90 outside #Buffalo – shot by Kadire Flowers pic.twitter.com/4DvIYqMqJu

The current temperature in Buffalo, New York, is 19 degrees — and it’s snowing. The video above was posted on social media a short time ago. It shows a pile-up of about 100 cars and trucks, many of which collided with one another due to the icy road conditions.

“Look at that truck,” another passenger says, filming a jackknifed tractor trailer. “This whole road is about to be shutdown for years,” he says.

“That’s ridiculous,” another voice can be heard saying.

Northern Erie County, New York, is currently under a blizzard warning, which will remain in effect until 1 a.m. on Wednesday, January 3.

According to the National Weather Service, a blizzard warning is issued when the two following “conditions are either occurring or expected within the next 12 to 18 hours.”

According to a public alert, traveling is very dangerous and drivers have been told to use extreme caution if they need to be on the roads. Those who do not have to travel are asked to stay off of the roads until the storm has passed and crews have had a chance to properly clear and treat the roads.

“Travel will be very hazardous, including during the evening commute,” reads the warning.

In addition to the slippery roadways, many of which are covered in snow and ice, there is a steady, 45-mph wind that is causing severely reduced visibility.

The Buffalo area is expecting an additional 1 to 3 inches by the time this weather system pushes through. On Wednesday, residents will get a bit of a break from the snow, but will still be dealing with cold temps, with a high hovering around 20 degrees. For those who will miss the white stuff, there will be scattered snow showers in the area on Thursday.

As for the remainder of the day today, western New York is under a Winter Weather Advisory until 7 p.m. local time.

Much of the northeast is experiencing brutal cold this week. In fact, parts of northern New York, New Hampshire, Vermont, and Maine are experiencing single digit temps that feel like 30 below 0.

Later this week, the east coast may be in for some seriously nasty weather. A storm system is expected to move-in by mid-week, bringing along with it the potential for from serious snow in the Northeast. Some areas could see upwards of a foot of snow by the time this storm moves out.

“From near Statesboro, Georgia, to Florence, South Carolina; Fayetteville and Greenville, North Carolina; and Norfolk, Virginia, mostly snow is forecast to fall. Near this zone, a narrow swath of several inches of snow are in store. Enough snow is in store to cover roads and the landscape,” Accuweather reports.

Areas as far south as central Florida may also see some snowflakes out of this massive weather system. 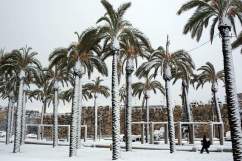 Will it Snow in Florida? Weather System Brings Cold to Sunshine State

Loading more stories
wpDiscuz
0
0
Would love your thoughts, please comment.x
()
x
| Reply
A video of a 100-car pile-up in Buffalo, New York, has made its way to the internet.