The winter storm may have passed through Georgia, but residents are still talking about the unusual snowfall they saw today. Some areas received up to six inches, but other areas were pretty much missed and only received about an inch of snow. Winter Storm Grayson is expected to bring snow and blizzard-like conditions to the Northeast region, but it’s already brought heavy snow and wintry conditions to South Carolina and North Carolina. On Thursday the storm is expected to undergo bombogenesis, where it rapidly intensifies in a low pressure situation. Grayson’s pressure might drop by 45 millibars in just 24 hours. Already, blizzard warnings have been posted for many areas in the Northeast, including Maine, North Carolina, Boston, Portland, Atlantic City, New Jersey, and parts of Virginia. Winter storm warnings have been issued in areas west of the blizzard warnings. In the meantime, parts of North Carolina saw six inches of snow on Wednesday, parts of South Carolina saw more than seven inches of snow, and even Georgia saw six inches in regions. Here are the snowfall totals as of 10 p.m. Eastern for parts of Georgia on Wednesday, January 3, 2018, according to the NOAA.

On Wednesday night, the storm should be off the coast of North Carolina and Virginia, with snow spreading through the mid-Atlantic by midnight and into southern New England by pre-dawn. Winds will increase, with gusts up to 50 mph along the coast of North Carolina into southeastern Massachusetts. Thursday is when the real action will begin in the northeast. Snow will intensify in New England during the day, especially the eastern portions, and should taper off by the evening. Winds will also intensify. Snow south of the New York City Tri-state area should end by mid-day. Wind gusts of up to 70 mph are possible with this storm, along with power outages, and downed trees. Blizzard conditions could last into Thursday night, The Weather Channel reported. The heaviest snow is expected in eastern New England, but much of the storm’s forecast is still unclear. There is also a risk of coastal flooding along parts of the Massachusetts shoreline on Thursday, with the peak impact happening between 12:30 and 2 p.m. Eastern at high tide on Thursday.

People from Georgia have been sharing fun photos of the snow today:

Sure, they only got an inch or two of snow in #Valdosta, #Georgia, but that was enough for the city's fire chief to make a snow angel – or at least try. pic.twitter.com/vIupNOxTKS @newnewspage

We've seen some crazy pictures from people in the South dealing with snow. Check out this guy from Savannah, Georgia. ?? >>https://t.co/vJzKSEm7YO pic.twitter.com/BQi2SWrAhh

Part 1 of what will surely be a lengthy Eastern US Winter Storm blog (bomb?) post: #GOES16 and #VIIRS signatures of fresh snow cover this morning in southeastern Georgia https://t.co/P25seg0JPl #GAwx pic.twitter.com/dUugPBwgPx 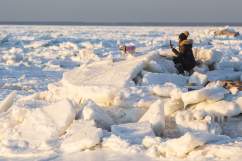