Stories of families being murdered are the stuff of literary lore. Think of books like In Cold Blood. However, the tragedy that befell the Kologi family of Long Branch, New Jersey on New Year’s Eve is all too real.

In the morning, there were six members of the Kologi family. By the end of the day, three were dead, and one was accused of killing them. A GoFundMe page has been set up to raise money for the family’s funerals. The suspect was identified in local and national news accounts as Scott Kologi, 16, although authorities have yet to name him due to his age.

FacebookScott Kologi when he turned 14.

“Linda, Steven, and Brittany were all beautiful people with the kindest hearts you could imagine. They were sadly taken from us on New Years Eve,” the GoFundMe page reads.

The family was massacred shortly before midnight on December 31 inside their home; the weapon was a semi-automatic rifle, and the shooter was allegedly the 16-year-old son. The victims, according to the prosecutor’s office in New Jersey, were the suspect’s father, Steven Kologi; the suspect’s mother, Linda Kologi; his sister, Brittany Kologi, and a family friend who lived in the home named Mary Schultz. Schultz was 70, the sister was only 18, and the parents were 44 and 42, respectively.

The teenage suspect was autistic, the New York Daily News reported after interviewing a family member. A family friend also told NJ.com that the suspect, who is the youngest of the siblings in the Kologi family, was a special needs youth who was cared for by his mother, Linda, and who did not attend regular schools.

The family consisted of the parents and four children – three boys and a girl, Brittany, who had just returned home from her first year of college to celebrate the holidays, according to posts on her Facebook page. The other two brothers survived the massacre, as did their grandfather, although it is not clear whether they were present in the home when the bloodbath unfolded.

The motive for the massacre is not clear. The family’s photos on their Facebook and Twitter pages indicate a close-knit family with nothing obviously awry. Brittany Kologi’s Facebook page showcased a typical teenage girl. She filled the page with photos of trips to Disney World, at college, with friends, selfies, and other typical pictures for someone her age. A few photos do show her brothers, including the teenage suspect.

According to a 2009 bankruptcy filing obtained by Heavy, the family had struggled with financial problems over the years, although there is no indication that this played any role in the shootings. The bankruptcy documents for Steven and Linda Kologi indicated they were saddled with extensive credit card debt, leaving their debt load higher than their assets, which were minimal and basically consisted of Honda Accords, their home, and some clothing. The filing says that, at least then, Steven Kologi was a mail man who worked for the U.S. Postal Service, a position he had held for 10 years. His wife was listed as unemployed in those documents.

Friends expressed great shock on Facebook upon hearing of the family’s demise. Some indicated that they knew Steve Kologi, the father, through youth baseball, which he sometimes coached. He also worked as a truck driver, according to The New York Post.

People expressed love for the family and concern for the surviving brothers and their grandfather (whose name is Adrian Kologi), as well as shock that the family could have met such an atypical end.

The Long Branch, New Jersey community where the family lived is a small town of about 30,000 people. It’s located on the state’s famed Jersey Shore. In a statement, the Monmouth County Prosecutor confirmed, “A 16-year-old boy is in police custody after four people were found shot to death inside his parent’s Long Branch home…Long Branch police responded to a 911 call reporting shots fired at 635 Wall Street in the city at 11:43 p.m. on Sunday, Dec. 31. 2017.”

Scott Kologi is on the left.

The prosecutor’s office alleges that the boy used a rifle to commit the slayings.”

A joint investigation by the Monmouth County Prosecutor’s Office and Long Branch Police Department continues, but it appears the 16-year-old boy used a Century Arms semi-automatic rifle to kill his victims. The teenager was taken into custody without incident,” the office stated.

You can read more about the Kologi family massacre here: 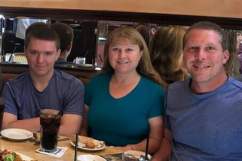