The lunar eclipse with the long title — Super Blue Blood Moon — is going to be visible in the early morning hours tomorrow, Wednesday January 31. But if it’s too cloudy, too cold, or you’re just too sleepy to get out of bed, you can still watch the eclipse online. Several source will have live streams of the lunar eclipse that you can watch from the comfort and warmth of your home on the live stream in the video above. The video of this beautiful blood moon is provided by Slooh.com. The video starts early morning January 31 at at 5:45 a.m. Eastern. Slooh will livecast the entire lunar eclipse — a stream that is expected to last for about five hours and 17 minutes. The totality phase of the eclipse will start on the live stream around 7:50 a.m. Eastern and last for about one hour and 16 minutes.

This lunar eclipse is the first total lunar eclipse since September 28, 2015. The next total lunar eclipse will be on July 27, 2018. This eclipse is called a “Blood Moon” because the total eclipse gives the moon a red hue during totality. The eclipse occurs as the moon moves behind the Earth’s shadow (and the Earth moves between the sun and the moon.) The moon stays a beautiful shade of red for about an hour. The event is called a “blue moon” because it’s the second full moon of the month. The “super moon” term is because it’s closer to the Earth than normal, but the size difference won’t be hugely apparent like it sometimes is.

The best views will be for people in the western part of the United States, eastern Asia, or Australia. If you’re on the eastern side of the U.S., then the rising sun will interfere with your view of the beautiful red moon. That’s why these live streams will be especially helpful for you. The streams below are courtesy of NASA and will start at 5:30 a.m. Eastern. The live stream is supposed to be available on both of NASA’s channels below (the Public and Media channels), but if one doesn’t work then at least the other stream should. The streams will already be running before the lunar eclipse coverage begins, but they should both switch to lunar eclipse programming at 5:30 a.m. Eastern.

Virtual Telescope is also offering a live stream of the Super Blue Moon Total Eclipse below. This stream starts at 11:30 UT (5:30 a.m. Eastern.) The Virtual Telescope team is partnering with imagers from across the globe to give you a wide variety of images and views. 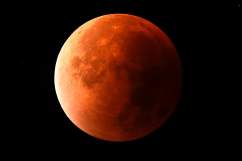 Lunar Eclipse Time: When Is the Super Blue Blood Moon January 31 Across the U.S.?