Maine has seen up to nine inches of snow so far from Winter Storm Grayson. The “bomb cyclone” winter storm rapidly intensified in a low pressure situation, bringing winds similar to a Category 1 hurricane in some regions, along with coastal flooding, power outages, and whiteout conditions. This morning, snow was falling at the rate of 1 to 2 inches per hour at the JFK Airport with up to 11 inches already recording in Long Island, and up to 3 inches per hour in Rhode Island. Some parts of Massachusetts already saw up to 10 inches of snow.  But how much snow exactly has fallen so far in the Maine area? Here’s what we know.

As of the time of publication, the NOAA had not released snow fall totals for Thursday, January 4, 2018 in Maine. But other sources have been reporting totals of their own. According to Ted McInerney, a meteorologist in Maine, the following totals have been reported so far, as of 2 p.m. Eastern:

The storm isn’t over yet in Maine:

Radar shows a large area of snow across the Northeast, darker blue areas indicate the heaviest snowfall. Bands of heavy snow extend from Maine to coastal New Jersey and across Long Island. The snow will end by early this evening in the city. pic.twitter.com/m34zNIseAB

Here are some more photos and stories from residents in the area:

Good day to hunker down to a game of #Canine #Scrabble . What are you doing during #WinterStormGrayson ? #DogsofTwitter#Maine#snow#blizzard pic.twitter.com/AGtl7WiXCV 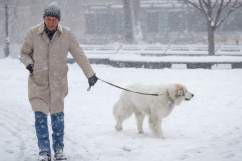 Loading more stories
wpDiscuz
0
0
Would love your thoughts, please comment.x
()
x
| Reply
Here's how much snow has fallen in Maine so far from the big winter storm, along with photos from residents in the area.