An autistic 16-year-old teenage boy is accused of shooting his parents, sister, and a friend to death with a semi-automatic rifle right before midnight in a family bloodbath that unfolded on New Year’s Eve in Long Branch, New Jersey.

Local and national news reports, as well as social media posts, identified the suspect as Scott Kologi. The boy’s name has not yet been released by authorities because of his young age, but he’s already accused of four counts of first-degree murder and is being held in a juvenile detention facility, according to NBC New York.

He’s accused of killing his father, Steven Kologi, 44, who was a youth baseball coach who had worked for the post office and as a truck driver; mother, Linda Kologi, 42; sister Brittany Kologi, 18; and Mary Schultz, 70, a family friend who lived in the house with the Kologi family, authorities revealed in a statement.

“We are in the unfortunate scenario where we are investigating a quadruple homicide,” authorities said in a news conference. “We are confident that it’s a domestic incident that is completely isolated.” A neighbor declared: “It’s totally out of the blue.” Long Branch, New Jersey is a small town of about 30,000 people that is part of the famed Jersey Shore.

1. The Family Presented a Loving Image on Social Media & the Motive Remains Unclear

There’s nothing on the family’s social media accounts to indicate anything was amiss; rather, they present like a normal, and close, family. On Facebook, Linda Kologi captioned the above photo: “Family photo The Cheesecake Factory Sept. 2016” and included a heart. On Twitter, she indicated an interest in playing the New Jersey lottery. “You never know how close to your life evil lurks,” wrote one man on Twitter who shared a GoFundMe page for the family.

Photos on family members’ Facebook pages show Scott Kologi celebrating a birthday with cupcakes, posing with his siblings, at a pumpkin patch, and playing video games.

According to The New York Post, the suspect’s weapon, a “Century Arms semiautomatic rifle — which was legally registered to a resident in the home — was seized.”

Prosecutors confirmed that the massacre was domestic in nature. “MCPO running an ongoing homicide investigation with 4 dead in Long Branch. No threat to the public as it is believed to be an isolated domestic incident. More to follow stay tuned,” the Monmouth prosecutor wrote on social media. He said that it took police only one minute to respond to the scene after receiving 911 calls that shots were fired.

“A 16-year-old boy is in police custody after four people were found shot to death inside his parent’s Long Branch home,” the prosecutor’s office confirmed in a statement. “Long Branch police responded to a 911 call reporting shots fired at 635 Wall Street in the city at 11:43 p.m. on Sunday, Dec. 31. 2017.” 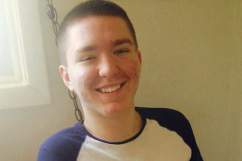 2. The Teenage Suspect Had Special Needs & Was Autistic

Scott Kologi when he turned 14.

Jalen Walls, a family friend, told NJ.com that the Kologis’ 16-year-old son “required special assistance and was cared for by his mother. The teen did not attend the same public schools as his brother and sister.” You can watch Walls’ interview below:

The husband of the boy’s grandmother told The New York Daily News that the teenager had autism.

However, the family friend told the New Jersey newspaper that the boy was “fully functional” and “comprehended what we were saying.” In a video of the interview with NJ.com, Walls also said that the suspect “needed help with certain things” and said the boy helped with baseball “around the town,” as his father was a coach. He described Long Branch as a small tight-knit town where most people know each other.

The initial reports of the mass shooting on New Year’s Eve came across as a possible active shooter, although authorities quickly revealed the tragedy was domestic in nature. The GoFundMe page was established to pay for the family members’ funeral expenses, and the message with it remembered the family’s kind hearts.

“Linda, Steven, and Brittany were all beautiful people with the kindest hearts you could imagine. They were sadly taken from us on New Years Eve. As a close friend of the Kologi family I am reaching out for help for the funeral expenses. All donations will go directly to a proper burial. Thank you all for the support,” it reads. Another friend recalled how Brittany “had her whole life ahead of her!!!! More importantly, pray for her surviving brother. I don’t know how you go on after such a horrific experience…… He definitely needs lots of prayers!!!!”

A friend of Steve Kologi’s wrote on Facebook: “The physical stature of a super hero and the sentiment a life long family man. You were good company Steve Kologi… Would have liked to have seen you one last time.”

3. Scott Kologi Was Described as ‘Always Smiling’ & Other Family Members Survived the Massacre

Joe Rios, a family friend, told The New York Post that Scott Kologi was “the nicest kid in the world.”

“He came to watch the softball games with Linda and he was always smiling. This is totally out of the blue,” Rios told The Post, adding, “This is not something I ever thought this young boy would do. I don’t know what happened. He was not a violent kid. He was always smiling.”

Other family members escaped the massacre: The boy’s brother and grandfather, Adrian Kologi, who were unharmed, according to The New York Daily News. The family consisted of four children overall: Three sons and a daughter, Brittany. The third son also survived, although it’s not clear whether he was home at the time.

Carole Kologi-Zawacki, the grandmother of the suspect, “was overwhelmed with grief when she heard of the killings,” Daily News reported, quoting her as saying, “Oh my God, Oh my God, Oh my God.” Mary Schultz, one of the victims who died, was the partner of Adrian Kologi, according to Daily News.

The gunfire broke out right before midnight, specifically at 11:43 a.m.

4. Steve Kologi Once Worked for the Post Office & Coached Baseball

Steven Kologi, in a bankruptcy filing from 2009, indicated he worked as a mail carrier for 10 years and said his wife was not employed. He was a youth baseball coach, according to tributes posted on Facebook by friends. The family reported assets of about $420,000, mostly tied up in property, but debts of more than $468,000.

The family’s assets were minimal; they owned two Honda Accords, clothing, and had a 401K. At that time in 2009, the children’s ages were given as 17, 11, 10 and 7. The New York Post reported that Steve Kologi was more recently working as a truck driver, and that one of the older boys was his child from another marriage.

The documents show the family had accrued thousands of dollars in credit card debt. You can read those bankruptcy documents here:

A surviving son, Steven Jr., wrote a tribute on Instagram to his parents that stressed they always provided for their children despite their financial struggles. It reads: “My New Years resolution is to be as great of a parent as my parents were to me. I know many of you don’t want to read long bios but they were the greatest parents I could ask for. Never once was I without a hot meal or a roof over my head. They made sure Christmas came every year although they struggled financially.”

Initial reports said that Scott Kologi would be charged as an adult. “The 16-year-old gunman will be charged as an adult later Monday with four counts of murder as well as one count of possession of a weapon for unlawful purposes,” The New York Daily News reported. However later reports indicated that prosecutors were still trying to decide whether to handle the case in adult or juvenile court.

“It’s a terribly tragic incident,” the prosecutor said during a press conference. On social media, friends were shocked that anyone would want to kill the family. “For this to happen to this man and his family just simply can’t be explained. I’ve known Steve ‘Kujo’ Kologi for decades and I can say this, I’ve never had an argument or disagreement since I’ve known him,” wrote one man.

Another friend wrote, “Not how I wanted or anybody could ever have imagined entering the New Year. My deepest sympathies to the Linda Steven Kologi famaily (sic). I loved them very much and they will be missed dearly. I’m so so sorry.”

Wrote another: “Prayers to the Kologi family…A Long Branch family.. Especially (another son). A great kid..who I had the pleasure of coaching his freshman year.. And his dad RIP.. I worked with during the summer was a cool laid back dude.. Sad news.. As we enter the new year…”

FacebookBrittany Kologi with her brothers.

Photos and a meme that Brittany placed on Facebook indicated she had recently graduated from high school and had come home from college for the holidays. She posted the above photo on Facebook, to which her mother responded, “The BEST kids in the universe” and included a heart. Brittany jokingly responded, “No just me.” Under a photo of Brittany in a graduation robe, her mother wrote, “My Beautiful Fairy Princess Brittany.”

Brittany was attending Stockton University in Galloway, New Jersey, according to her Facebook page. She jokingly wrote on Facebook, “Studied at Hogwarts School of Witchcraft and Wizardry.” Her last public post was a meme that read: “Coming home as a student is so confusing like do I unpack? do I live out of a suitcase for a month? do I just leave everything on the floor?”

She shared a photo of a box full of cookies that she said was a care package from her parents. “Excited about the care package my parents sent me for finals week that also came with tea and coffee,” she wrote.