Billy Graham is lying in honor at the U.S. Capitol Building today through the morning of Thursday, March 1. He is only the fourth private citizen to be given this honor. The evangelist known worldwide passed away at 99 and will be buried on Friday during a private funeral service.

Billy Graham: A Life Remembered (Trailer)Trace Billy Graham’s unexpected journey from a North Carolina farm to the largest arenas and stadiums in the world. Watch "A Life Remembered" here: youtu.be/iwJ-sT9OwA0. Mr. Graham devoted his life to the message of Christ. To learn more about God's love for you, visit StepstoPeace.org.2018-02-27T20:58:43.000Z

Graham will lie in honor at the Capitol Rotunda today and tomorrow. A flight carrying Graham’s body will land in Dulles International Airport and be escorted via motorcade to the Capitol this morning. The motorcade will travel from the Dulles Toll Road to I-66, then into D.C. across the Roosevelt Bridge, Fox reported. The hearse will arrive at the Capitol around 10:30 a.m. Eastern. Military guards will carry the casket up the East Front Steps of the Capitol, into the Rotunda.

The public can visit today from 1 to 8 p.m. On Thursday, March 1, the lying in honor period will end at 10 a.m. local time. If you want to visit Graham and pay your respects, enter through the Capitol Visitor Center. Photographs are prohibited.

The letter read: “Congress joins the American people in expressing our sincerest condolences to you on the passing of the Rev. Billy Graham. In recognition of Rev. Graham’s long and distinguished service to the nation, it is our intention to ask the House of Representatives and the Senate to permit that his remains lie in honor in the Rotunda of the Capitol. With your approval, we will move forward with these arrangements, so that Americans have this opportunity to pay their respects to Rev. Graham before he is laid to rest.”

2. Only Four Private Citizens Have Received This Honor

GettyGeorge W. Bush and his wife Laura stand beside the Rev. Billy Graham.

Only four private citizens have been given this honor: Billy Graham, Rosa Parks, and Jacob Chestnut and John Gibson. Prior to lying in honor at the U.S. Capitol, Graham lay in repose on February 26 and 27 at the Billy Graham Library. Thousands visited and paid the evangelist their respects.

Lying in honor is reserved only for private citizens, who are given the honor of having their casket placed in the U.S. Capitol Rotunda for public viewing. There are no official rules that dictate who can lie in state vs who can lie in honor, except that customarily only government officials can lie in state, versus private citizens who can lie in honor. The casket is typically guarded by the U.S. Capitol Police. The decision to grant this honor is made by a concurrent resolution of the House and Senate, and can be granted to anyone who has given a distinguished service, with the family’s approval. (In contrast, lying in state is an honor offered automatically to Presidents and former Presidents, and selectively to other elected or government officials. Lying in state also takes place in the Rotunda, but instead of being guarded by Capitol Police, the casket is guarded by members of each branch of the Armed Forces.)

Graham’s casket is a simple pine plywood casket that was made by inmates at the Louisiana State Penitentiary. A wooden cross is nailed on top. The casket will be supported by a pine board catafalque, also known as a raised platform. This was constructed for Abraham Lincoln’s coffin. It will be draped with a black cloth similar to that used when Lincoln lay in state.

3. Here’s How to Attend the Ceremony Today

Billy Graham: A Life Remembered | Billy Graham TV SpecialTrace Billy Graham’s unexpected journey from a North Carolina farm to the largest arenas and stadiums in the world. For Billy Graham photos, stories, sermons and more, visit: BillyGrahamMemorial.org. Mr. Graham devoted his life to the message of Christ. To learn more about God's love for you, visit StepstoPeace.org.2018-02-23T15:00:01.000Z

Visitors are welcome from 1 to 8 p.m. Eastern today. If visiting, you should come through the Capitol Visitor Center. All who want to attend the viewing, including those who have special needs, will need to line up on First Street, NW/SW, between Constitution and Independence avenues, WTOP reported. Or you can line up on Second Street, NE/SE, between East Capitol Street and Independence Avenue, SE.

Any phones or other electronic devices must be turned off while you are in the Capitol. Photography and any form of electronic recording are not allowed while in the Rotunda.

U.S. Capitol Police ask that you bring as little with you as possible, so security screening can go by faster. Only small bags are permitted inside. Prohibited items include firearms (even replicas), ammunition, weapons of any kind, pointed objects (including but not limited to razors, knives, knitting needles, and letter openers), and explosives. Pens and pencils are allowed. Other prohibited items include bags larger than 18 inches wide x 14 inches high x 8.5 inches deep; mace and pepper spray; any liquid (but open and empty clear bottles are allowed); aerosol containers; non-aerosol spray unless prescribed; sealed envelopes and packages.

Because of multiple street closures, visitors are asked to use public transportation. There is no parking on Capitol grounds.

4. Graham Will Have a Private Funeral on Friday

An honor guard will stand watch over Graham’s casket all night tonight. On Thursday morning, they will escort his casket out of the Rotunda. The public will not be allowed in the Capitol during the departure. Graham’s body will be returned to Charlotte, North Carolina.

5. Here Are Billy Graham’s Own Words about Life After Death & His Faith

If you’d like to learn more about Billy Graham’s beliefs on life after death, he had plenty to share. Here are a few videos with his words and thoughts.

In His Own Words: Billy Graham Talks About HeavenSpecial words from Billy Graham on the promise of heaven and the indescribable peace he experienced in his latter years. This is the last footage the Billy Graham Evangelistic Association captured of him a few years ago.2018-02-26T20:30:34.000Z

Billy Graham on His Call to Ministry"Ministry means service." Listen to Billy Graham's words on being called to ministry. Subscribe and save this playlist for more stories and anecdotes in celebration of Billy Graham's 100th year. Has God's work through Billy Graham changed your life? Submit your story here and you may be featured on billygraham.org: billygraham.org/share.2017-12-15T21:39:18.000Z

And here is a video showing his crusade at Yankee Stadium in 1957: 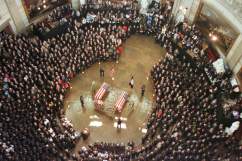 Read More
5 Fast Facts, Breaking News, Christianity
Billy Graham will be lying in honor at the Capitol Rotunda today. Learn what time the ceremony will be, when the motorcade will happen, and more.