SpaceX’s Falcon Heavy rocket is taking off this afternoon and thousands of people are expected to show up to watch it live. But if you can’t watch it in person, you’ll still want to watch it online live as it happens, because this is definitely history in the making. The live stream above will show the launch, which was scheduled to begin at 1:30 p.m. Eastern today, Tuesday, February 6, but was delayed until 3:45 p.m. Eastern due to wind shear. The launch window is open until 4 p.m. Eastern. The Falcon Heavy is a reusable launch vehicle that could ultimately carry humans into space, including on crewed missions all the way to Mars. (And although the honor of sending human tourists to the moon or a crew to Mars will likely end up going to SpaceX’s upcoming Big Falcon Rocket, this is still a momentous occasion in space travel history.) If all goes well, today’s launch will carry Elon Musk’s Tesla Roadster into a heliocentric orbit near Mars  and beyond. When Musk first announced he was planning to send his Tesla into space, everyone thought he was joking. But just like the Boring Company and even the recent flame thrower he’s been selling, Musk was very serious. A successful Falcon Heavy launch means that we can finally focus again on sending humans beyond the International Space Station, back to the Moon or even all the way to Mars. Musk has said that the Falcon Heavy has a 50-50 chance of success.

The live stream above is the CRS-9 “hosted” live stream of the launch. It will begin at approximately 1:30 p.m. Eastern. After the launch is finished, this will revert to a fully rewatchable video. You can also watch it on SpaceX’s webpage here. Note: If you’re looking for the technical webcast, there’s an icon on the bottom right of the YouTube video above where you can switch cameras.

Just spoke to an ebullient Elon Musk at the launch pad. In his heart, he feels like there’s a 67 percent chance of success. In his head, it’s probably closer to 50-50.

If you want to participate in live discussions, Reddit is offering a few. There’s a Slack Meetup here and a Discord discussion here. Here’s the mission timeline for today’s launch:

COUNTDOWN in Hour/Min/Sec Events before launch

The Falcon Heavy consists of a strengthened Falcon 9 rocket core with two Falcon 9 first stages added as strap-on boosters. This increases its maximum low Earth orbit payload, giving it more lift capability than any operational rocket. This includes a payload of 37,000 pounds (16,800 kilograms) to a trans-Mars injection. In other words, that’s twice the lift capacity of the Delta 4 Heavy of United Launch Alliance, the biggest existing American rocket. Musk wrote that if today’s launch works, “the Falcon Heavy will be the most powerful rocket in the world by a factor of two and the highest payload launch vehicle to reach orbit after the Saturn V moon rocket. Could do crewed missions to the moon and Mars with orbital refilling, but better to leave that to the BFR program. ”

Here’s what happens during and after the launch. Falcon Heavy’s first stage is composed of three Falcon 9 nine-engine cores generating more than 5 million pounds of thrust at liftoff. After liftoff, the two side boosters will separate from the center core. These side boosters will return to their landing sites for future reuse. When they separate, they’ll flip and initiate a boostback burn to return to Cape Canaveral Air Force Station. The center core will also return for reuse, landing on a drone ship in the Atlantic Ocean. It will also perform a boostback, but it won’t have enough fuel to return to land. That’s why it’s landing on the Autonomous Spaceport Drone Ship (ASDS), nicknamed Of Course I Still Love You.

Initially, it was planned that the car would separate from the rocket’s third stage shortly after it leaves Earth’s atmosphere. But Musk revealed on Monday that the third stage, which has the car on it, will instead coast for six hours through the Van Allen radiation belts. This leaves more things to chance, such as the fuel possibly freezing, oxygen vaporizing, and other issues that could hurt the rocket’s ability to reach trans-Mars injection. Problems at that stage might mean that the Roadster doesn’t escape Earth’s orbit but burns up in the atmosphere instead.

Musk: We are doing a six-hour coast to demonstrate to the Air Force the capability to do direct-to-GEO missions. Risk is that the Roadster ends up in LEO.

Yes, that means what you think — the Tesla Roadster might just end up orbiting the Earth. But if the third burn goes as planned, then the Tesla could be carried more than 400 million kilometers away from Earth at 11 km/second. If the coast stage is successful, the Roadster will then separate from the upper stage, targeting a heliocentric orbit. In other words, it will orbit the sun and be in close proximity to Mars during certain points of its orbit. “It will be in an elliptical orbit with one part of the ellipse being at Earth orbit and one part being at Mars orbit, so it will essentially be an Earth–Mars cycler,” Musk said to Florida Today. “We estimate it’ll be in that orbit for several hundred million years, maybe even in excess of a billion years.”

Will you be able to see pictures? Yes! The Tesla Roadster will have three cameras attached, transmitting photos back to Earth. What’s next after this? In three to six months, the Falcon Heavy may launch with a customer payload this time. These might include Arabsat, ViaSat, or the Air Force. But the Falcon Heavy may not be around forever. SpaceX’s next big rocket, the Big Falcon Rocket (BFR) is top priority. Musk has said that in the future, SpaceX might discontinue the Falcon 9 and Falcon Heavy and put all its resources into developing the BFR. As long as the BFR stays on schedule, SpaceX will focus on sending people — including tourists — into space on the BFR, not the Falcon Heavy. But if the BFR’s delayed, then crews might be put on the Falcon Heavy after all.

Oh, and now we have a live feed too: 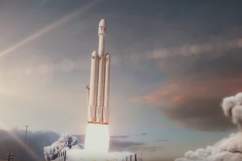 What Time is the SpaceX Falcon Heavy Launch Today? [Times Around the World]