Fred Guttenberg, the father of Stoneman Douglas High School victim Jaime Guttenberg, has emerged as one of the strongest voices for changes to gun laws in the wake of the mass shooting.

Guttenberg strongly challenged Republican Florida Sen. Marco Rubio on the question of an assault weapon ban and other gun policies during a CNN Town Hall. The Town Hall, which was held on February 21, also included numerous survivors of the mass shooting. Authorities have accused an expelled student, Nikolas Cruz, of murdering 17 students and staff members in what was the nation’s third deadliest school shooting in its history, after Virginia Tech and Sandy Hook.

Fred Guttenberg revealed on Twitter that he tried to shake Supreme Court nominee Brett Kavanaugh’s hand on the first day of Kavanaugh’s confirmation hearing, but Kavanaugh didn’t shake it. “Just walked up to Judge Kavanaugh as morning session ended. Put out my hand to introduce myself as Jaime Guttenberg’s dad. He pulled his hand back, turned his back to me and walked away. I guess he did not want to deal with the reality of gun violence,” Guttenberg said.

Fred Guttenberg, the father of Jamie Guttenberg who was killed in the shooting in Parkland, Fla., left, tries to shake hands with @realDonaldTrump's Supreme Court nom., Brett Kavanaugh, right, during a lunch break. Kavanaugh did not shake his hand. (AP Photo/Andrew Harnik) @ap pic.twitter.com/smcCGuLT6X

Fred Guttenberg’s daughter Jaime was 14 years old, and she was six months into her freshman year at Majory Stoneman Douglas High School.

Sen. Marco Rubio is confronted by Fred Guttenberg, whose daughter was killed in the Parkland shooting: “Look at me and tell me guns were the factor in the hunting of our kids … and you will work with us to do something about guns” #StudentsStandUp https://t.co/hK7TcyajNC

One of the most dramatic moments at the CNN Town Hall came when Guttenberg challenged Senator Rubio on assault weapon bans and other gun control issues. You can watch a video of the exchange above.

“Look at me and tell me guns were the factor in the hunting of our kids … and you will work with us to do something about guns,” Guttenberg said at one point during the exchange. At one point, Guttenberg told Rubio: “Your comments this week, and those of our president, have been pathetically weak.”

At another point during the emotional encounter, Fred Guttenberg said: “Senator Rubio. My daughter, running down the hallway at Marjory Stoneman Douglas, was shot in the back with an assault weapon — the weapon of choice. OK?”

He added, “It is too easy to get. It is a weapon of war. The fact that you can’t stand with everybody in this building and say that, I’m sorry.”

Rubio responded in part, “I believe that someone like this individual and anyone like him shouldn’t have any gun,” Rubio said. “I absolutely believe that in this country if you are 18 years of age, you should not be able to buy a rifle, and I will support a law that takes that right away.”

2. Jaime Wanted to Be an Occupational Therapist & Was Remembered for Her Beautiful Smile

In a Facebook post, Jaime’s aunt Abbie Youkilis was quoted as saying: “Jaime was in the 9th grade. She was a pretty girl with the world’s best smile and her soul was sensitive and compassionate. She was intelligent and feisty and she danced with beauty and grace. She always looked out for the underdog and the bullied and she probably had been kind to the student who shot her. She planned to grow up and become a mommy and an occupational therapist.”

Jaime was a dancer at Dance Theatre of Parkland, according to tributes left for her on Facebook. She was a freshman at the school. At a candlelight vigil for his daughter, an emotional Fred said, “This makes no sense …this is impossible. My girl, my 14-year-old baby … For those of you who knew my baby, she was the energy in the room. She made people laugh and, yes, sometimes she made us cry. But she always made her presence known.I sent her to school yesterday. She was supposed to be safe. My job is to protect my children, and I send my kids to school. In the morning, sometimes, things get so crazy. She runs out and goes, ‘I gotta go, Dad. Bye.’ And I don’t always get to say I love you. I don’t remember if I said that to Jaime yesterday morning.”

He added: “Jaime was such a special kid. All of the kids here are. What is unfathomable is Jaime took a bullet and is dead. I don’t know what I do next. My wife is home. We are broken.” 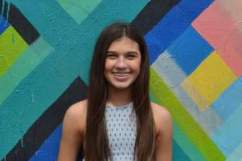 Fred Guttenberg, the grieving father of 14-year-old Jaime who was gunned down in her Florida high school, speaks at a vigil. "I sent her to school yesterday. She was supposed to be safe!" https://t.co/Tu9wlChj1Z pic.twitter.com/ZllbNipIKO

After Jaime’s father, Fred, learned that Jaime had not survived the shooting, he penned an emotional post on Facebook. It read:

My heart is broken. Yesterday, Jennifer Bloom Guttenberg and I lost our baby girl to a violent shooting at her school. We lost our daughter and my son Jesse Guttenberg lost his sister. I am broken as I write this trying to figure out how my family get’s through this. We appreciate all of the calls and messages and we apologize for not reacting to everyone individually. Jen and I will be figuring things out today and so we ask that you respect out privacy. We will be getting messages out later regarding visitation. Hugs to all and hold your children tight.

The Parkland Homes R Us mission statement describes it as “a real estate and relocation group. We will help you find your home, connect to services such as lending, title, inspection, home improvement and moving. Through an affiliation with Nationwide Auto, we can also handle your new car purchase/lease.”

Jaime Guttenberg, a student at the school, died in the massacre, but her brother made it home alive.

For hours, loved ones shared Jaime’s photo on Facebook in a desperate bid to find her. “For those wondering, I have Jesse and he is Ok. We cannot reach Jaime,” Fred wrote on Facebook early on. Tragically, only one of the two Guttenberg children came home.

5. Fred Is Urging America to Adopt Gun Control & There Is an Orange Ribbon Movement for Jaime

On his Facebook page, Fred Guttenberg wrote, “Dear friends and family, my fight for the safety of our kids begins today. I will be on CNN Erin Burnett in the 7:00pm hour and on the CNN Town Hall in the 9:00pm to 11:00pm hour. Watch and do not let the debate end this time until we all have meaningful gun reforms. Love to all.”

Fred described the “orange ribbon movement” that was started in memory of Jaime. Orange was the young woman’s favorite color.

“Tomorrow Jennifer Bloom Guttenberg and I will bury our baby girl,” he wrote. “We are in awe of the outpouring of love and support and the growth of the orange ribbons for Jaime movement as shown on this ABC news segment. The Orange Ribbon movement will become a symbol for change in our country. Thank you to all of the dancers around the world who brought this movement forward and showing my family love.”