The House Intelligence Committee has finally released a redacted, unclassified version of the Democrats’ FISA rebuttal memo. It was unclear at first if they were ever going to actually release the memo, but now it’s available for anyone to read. You can view it in the embedded file below or read it directly here, where it was uploaded by the House.

Astute readers may recognize that the Democrats labeled the memo “Correcting the Record,” which is very similar to “Correct the Record,” which is the name of a super PAC founded by David Brock that supported Hillary Clinton’s 2016 campaign. The Democrats’ memo is 10 pages long compared with Nunes’ 4 1/2-page memo. Before the memo was released, the Democrats released a statement about the FISA memo which read, in part: “The Republican document mischaracterizes highly sensitive classified information that few members of Congress have seen, and which Chairman [Devin] Nunes himself chose not to review. It fails to provide vital context and information contained in DOJ’s FISA application and renewals, and ignores why and how the FBI initiated, and the Special Counsel has continued, its counterintelligence investigation into Russia’s election interference and links to the Trump campaign.”

.@RepAdamSchiff announces House Intel Dems have written their own counter-memo; will seek to make public, too. pic.twitter.com/0pK3xulL8u

The memo was released following redactions by the FBI. It’s a 10-page document meant to counter a 4 1/2 page GOP memo released earlier by Devin Nunes. (You can read the GOP memo in Heavy’s story here.) Nunes’ FISA memo alleges that the FBI and the Department of Justice used the Steele dossier, funded by the DNC and Hillary Clinton’s campaign, to get a warrant from the Foreign Intelligence Surveillance Court to surveil Carter Page, a U.S. citizen and an adviser on President Donald Trump’s campaign. The original FISA memo alleges that when seeking the FISC warrant to surveil Page, the FBI omitted to share that their allegations came from the dossier. The memo reads, in part: “The ‘dossier’ compiled by Christopher Steele (Steele dossier) on behalf of the Democratic National Committee (DNC) and the Hillary Clinton campaign formed an essential part of the Carter Page FISA application… Neither the initial application in October 2016, nor any of the renewals, disclose or reference the role of the DNC, Clinton campaign or any party/campaign in funding Steele’s efforts…”

This new memo seeks to counter those points. It states that the FBI and DOJ officials did not abuse the FISA processor omit material information. It states: “In fact, DOJ and the FBI would have been remiss in their duty to protect the country had they not sought a FISA warrant and repeated renewals to conduct temporary surveillance of Carter Page, someone the FBI assessed to be an agent of the Russian government. DOJ met the rigor, transparency, and evidentiary bias needed to meet the FISA’s probable cause requirement…” The new memo asserts that:

The new memo goes on to say that the initial warrant application, along with the three renewals, received independent scrutiny and approval by four federal judges, two of whom were appointed by President George W. Bush, one by President George H.W. Bush, and one by President Ronald Reagan. The initial application was filed October 21, 2016, and the renewals were filed January 2017, April 2017, and June 2017. The memo asserts that FISA was never used to spy on Trump or his campaign. Page’s affiliation with the Trump campaign had ended months before the first application, and he had already been on the FBI’s radar. In 2013, three Russian spies were indicted, two of whom had targeted Page for recruitment.

The memo states that the DOJ provided additional information from independent sources that corroborated Steele’s reporting during its three subsequent FISA renewal applications. However, a list of that information is nearly completely redacted.

And yes, if you think you recall that President Trump had originally said the memo wasn’t going to be released, you’re partially right. On February 10, he did say that he wouldn’t release the Democrats’ counter memo, but it wasn’t a permanent decision. It was sent back to the House Intelligence Committee for changes before being released. At the time of the decision, White House Counsel Donald McGahn said that Trump was inclined to declassify it, but some sensitive passages and classified items needed to be redacted first. Democrats worked with law enforcement to redact certain details in the memo, allowing for its ultimate release.

Now that both memos have been released, it’s important to remember that partisan politics might be playing a role in both memos, as each memo is authored by an opposing side. The original FISA memo was authored by Republicans, alleging misconduct by Democrats. The counter memo is authored by Democrats, alleging that Democrats followed procedures correctly and Republicans are trying to stop the Russian investigation. However, this can also be a good jumping off point for exploring transparency and the surveillance of U.S. citizens. After the original FISA memo was released, Sen. Rand Paul seemed to step a bit away from the main party line when he tweeted this message:

While I applaud the release of this memo, I also call for Congress to take immediate action to help prevent such behavior in the future. Read my full statement here: https://t.co/kxeWAnIOWc #MemoDay 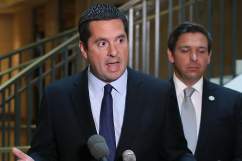 Devin Nunes’ Net Worth: 5 Fast Facts You Need to Know