‌WARNING: The videos below show images that may be disturbing to some.

Van plowed into pedestrians in Shanghai. Several dead, many more injured. Gas tanks were found in the van. pic.twitter.com/vekaMJQmQ9

Van plowed into pedestrians in Shanghai. Several dead, many more injured. Gas tanks were found in the van. pic.twitter.com/T9O5qZXt1Z

A van crashed into a crowd of pedestrians at the intersection of West Nanjing and Xinchang Roads in Shanghai’s Huangpu District on the morning of February 2. The incident was first reported on social media, with several people taking to Twitter to post photos and videos of the scene. People in the area have tweeted that the incident occurred around 9:15 a.m. local time. According to the latest reports, this incident appears to have been an accident.

“A 40-year-old man lost control of his vehicle and plowed into pedestrians on a busy Shanghai street Friday morning, after the van he was driving caught fire,” CNN reported. “Eighteen people were injured, including the driver surnamed Chen, when the van mounted the sidewalk at an intersection in downtown Shanghai around 9 a.m., Shanghai police said in a statement.”

Many of the photos and videos posted to social media show bodies strewn across the pavement, with some of them not moving. The vehicle, which looked like a minivan that was brown in color, came to a stop when it crashed into a tree in front of a Starbucks coffee shop. Dozens of people were in the area at the time of the crash.

“At about 9:15 today, there was a suspected suicide attack at the gate of the People’s Park in Shanghai Nanjingxilu and Huangbei North Road. A field license van deliberately crashed into the crowd, causing many serious injuries. The vehicle is fitted with multiple liquefied gas cylinders,” wrote one Twitter user shortly after the incident occurred.

Officials have confirmed that the vehicle was filled with gas containers. It appears as though those containers were simply being transported somewhere and that one of them may have ignited while the man was driving through the city. Authorities do not seem to believe that this incident was terror-related. A terror attack was speculated because terrorists have resorted to driving vehicles into crowds of people. This has happened in London, Paris, and in New York, in recent years.

According to AFP News Agency, 18 people have been hurt. Three of those people are said to be in critical condition. There have not been any confirmed deaths at this time, despite some social media users claiming that there have been “several.”

As you can see in the photo below, police cars and fire trucks arrived on the scene. Police worked to secure the area and firefighters and other emergency personnel helped the victims.

#BREAKING: A car plowed into pedestrians in downtown Shanghai Friday morning, leaving 18 hospitalized, 3 of them severely injured, local authorities say. Cause is still under investigation. pic.twitter.com/jhTaIYWFnd

Various photos and videos showed that the van was on fire, but firefighters were able to extinguish the flames in a timely manner.

You can see a video of firefighters extinguishing the van fire in the video below.

After the crash, some people walked up to the van to check things out. In some videos, people can be seen looking in the windows of the van, but the driver wasn’t visible. Several pedestrians were crying as they tried to gather their thoughts while trying to help those in need. 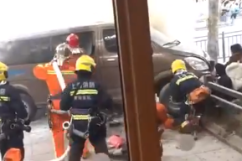