Donald Trump Jr. and Aubrey O’Day had an affair, according to Us Weekly. The outlet reported that the two had a secret relationship for a few months in 2011 and 2012.

Trump Jr. is a father of five. His dad is the 45th President of the United States, Donald Trump, and his mom is Trump’s first wife, Ivana. In 2016, Trump Jr. became a part of his father’s political campaign. While he is known to frequently comment on various political issues on social media, Trump Jr. doesn’t hold a job in the political sphere. He oversees the Trump Organization, a role that he took on with his brother, Eric, after their dad became the POTUS.

O’Day rose to fame on P. Diddy’s Making the Band 3, which aired on MTV back in 2005. She was a member of the girl group Danity Kane. After the group’s split, O’Day did a couple of reality shows. However, she has since found her way back to music. She is currently part of the group Dumblonde with former Danity Kane member, Shannon Bex.

News of an affair between Trump Jr. and O’Day broke after his wife, Vanessa, filed for divorce earlier this month.

1. They Met When O’Day Was on ‘Celebrity Apprentice’

life is better with sprinkles on top :)

On March 19, Us Weekly posted a bombshell report, claiming that Donald Trump Jr. had an affair with singer Aubrey O’Day. A source told the outlet that Trump Jr. and O’Day started getting close while taping Celebrity Apprentice in 2011, and they ended up hooking up toward the end of that year.

Page Six reports that the two would “meet up” in different cities and would write each other “love notes.”

“As far as what Don told Aubrey, he was done with Vanessa. He already started putting things in place, like setting up a place in NYC to live. Don would talk to Aubrey about how he was miserable in his marriage and how Vanessa was so controlling and paranoid about him leaving. In his mind, he was going to be separated with Vanessa and be with Aubrey,” a source told Us Weekly.

But, according to the report, Trump Jr. broke things off with O’Day a few months later. The reason? His then-wife supposedly found emails between him and O’Day. As one could probably imagine, this caused a rift between Don and Vanessa. At the time, they had three young children together and seemed very happy.

Another source told Page Six that Trump Jr.’s dad got involved, telling his son to “knock it off.”

They were able to work through Trump’s alleged infidelity and Vanessa apparently forgave her husband, bearing two more of his children in the years that followed.

Their marriage didn’t last, however. On March 15, 2018, Vanessa Trump filed for divorce in Manhattan District court.

2. Vanessa Trump Confronted O’Day, According to Us Weekly

Happy birthday @realDonaldTrump we hope you have an incredible day! pic.twitter.com/WtwkLCx8nH

“She called Aubrey with her kids on the phone,” a source told the outlet. Evidently, Vanessa was hoping to “shame” O’Day into ending her relationship with Trump Jr. by using her children to her advantage, the outlet claims.

Vanessa Trump has not spoken out about the rumors concerning her soon-to-be ex-husband and his alleged mistress. In fact, she has been keeping herself out of the spotlight and seems to be focused on the well-beings of her five kids. Not long after news of her husband’s alleged affair broke, Vanessa slipped away for some R&R with her littles. She posted the following photo on Twitter on March 20.

It’s time for spring break with my kiddies ! pic.twitter.com/VlzINumxH4

While full details about O’Day’s relationship with Trump Jr. aren’t available, Us Weekly reports that the two don’t speak — and that they “haven’t spoken” since going their separate ways in 2012.

“She doesn’t regret any of it though. She really loved him and she was happy with him,” a source told the outlet.

Neither O’Day nor Trump Jr. have spoken out about the affair reports. It’s unknown if either of them has any plans to confirm or deny the rumors or if they have any plans for getting back together.

O’Day is currently single after splitting from boyfriend, Pauly D, of Jersey Shore fame. The two ended their 2.5-year relationship in 2017.

It’s unknown if O’Day will ever speak out about the alleged affair. According to various reports, O’Day has hinted about her relationship with Trump Jr. on a couple of different occasions. For example, she sent out a curious tweet just after President Trump was elected into office.

“My story I didn’t tell is worth millions now,” she tweeted. She also took some time to send out some messages about how disappointed she was in her country for electing Trump. You can see one of those tweets below.

I'm heartbroken. Every beautiful piece of progression that our country could have moved toward is now gone.

In March 2012, just after she and Trump Jr. ended things, O’Day tweeted that she was pregnant. At the time, O’Day wasn’t in a relationship that the public was aware of. She soon deleted the tweet, however, and played it off as an April Fool’s joke.

“I’ve always been a huge fan of April Fool’s Day. I just thought that the pregnant joke would be the most fun, and to be honest, it’s just something I’ve been thinking about a lot more recently. I’m getting to that age where my hormones are going and I’m looking for that … the joke just seems relevant,” she told Us Weekly a couple of days later.

Another time that people think O’Day might have been referencing her relationship with Trump Jr. was in 2012 when she appeared on Risk.

“I started up this unspoken connection with a big celebrity who I can’t name because I’ll get sued up the ass,” O’Day said.

Check out the video below. Please be advised that the language used might be NSFW.

Shortly after news of the affair broke, an old photo that O’Day posted back in 2012 surfaced online. The picture is just of a pair of feet (seen above) — O’Day’s and someone else’s. Upon looking closely at the photo, some people have said that the other set of feet belong to Trump Jr.

Despite O’Day openly posting about having a boyfriend at this time, no one seems to be able to identify who she was dating. However, it seems like that mystery might now be solved.

The Daily Mail was able to do a sort of side-by-side comparison of Trump Jr.’s feet, allowing readers to compare the feet in O’Day’s picture to another photo showing Trump Jr.’s bare feet. The consensus seems to be that the feet are indeed a match.

“The man is not identified, but a side-by-side comparison reveals that the feet are remarkably similar in appearance to those of Donald Trump Jr. There are few pictures that show Don Jr’ feet surprisingly, despite his penchant fore the outdoors. Many photos of him fishing or on the beach tend to cut off at the ankles, just before revealing his feet,” the Daily Mail reports.

5. O’Day Recorded a Song Called ‘DJT’ That Is Said to Be About Trump Jr.

childlike in wonder, romantic in revolt

After her split from Trump Jr., O’Day has recorded quite a few songs and is even getting ready to release an album with Shannon Bex.

Two of the songs that O’Day recorded in the 2013-era have been linked back to president’s son. For starters, O’Day recorded a song called “DJT.” The meaning of the song title now seems obvious, as those are Trump Jr.’s initials. The lyrics, however, told a more in-depth story.

“You want to go back and live in the life that you had have forever? … I’ll always want you and always wonder about it but it doesn’t matter because I have to stay here. What made you stop believing in our world?”

A second song recorded by O’Day is also said to be about Trump Jr. According to TMZ, O’Day released a remake of Gotye’s “Somebody That I Used to Know,” and changed the lyrics up a bit to fit with her recent life experiences.

“You said that was the reason for your pain / But you were scared to ruin your family’s name / Your wife’s the only one glad we are over.”

You can listen to the Gotye remake below. 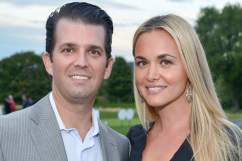 Loading more stories
wpDiscuz
0
0
Would love your thoughts, please comment.x
()
x
| Reply
Donald Trump Jr. and Aubrey O'Day had an affair back in 2011. The two dated for a few months until Trump's wife found out. Here's everything you need to know.