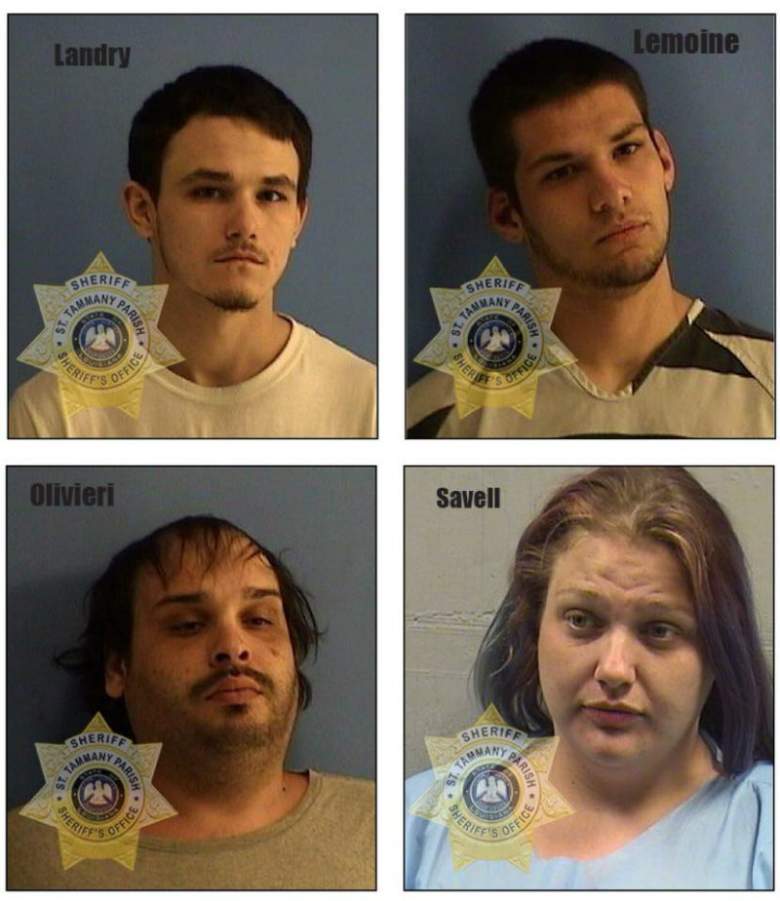 St. Tammany Parish JailThe suspects in the grisly murders of Dustin Hartline and Raegan Day are pictured above.

Four suspects have been arrested after the bodies of two Louisiana friends were found in a submerged vehicle at a boat launch in what authorities deemed a “carjacking gone bad.”

According to the St. Tammany Parish Sheriff’s Office, the bodies of 20-year old Raegan Elizabeth Day and 28-year-old Dustin Hartline were found by a dive team Monday inside of a vehicle at a boat launch in Slidell, which is located about 40 miles east of New Orleans.

1. Police Say the Couple Was Ambushed & Shot by Masked Assailants Before Their Bodies Were Submerged in Their Car

St. Tammany Parish Sheriff Randy Smith said at a press conference Wednesday that Day was shot twice in the head and Hartline was shot once in the back of the head.

Smith said investigators determined the suspects prepared to carjack Day and Hartline of a 2011 Chevrolet Camaro where their bodies were found. He said the victims set up a meeting about the car with Savell, not realizing a carjacking was planned.

“We learned during this investigation that this was a carjacking gone bad,” Smith said. “These four individuals that were arrested for first-degree homicide had planned this, premeditated this.”

They had masks on, they used guns, to steal this 2011 Chevrolet Camaro,they used force. Both these two individuals were shot and then put in the vehicle and driven to the boat launch where the car was disposed of. After getting arrest warrants for the four individuals, we had our suspects…who were hiding over in Mississippi.

Detectives were able to locate three weapons during the investigation and two of those are believed to be the murder weapons on both of our victims.

2. In a Facebook Live Video, Lemoine Says ‘I Can’t Even Get the F**kin Car I Want’

In a Facebook Live video, Lemoine can be heard speaking to his fiancée, Haleah Michele Webre, about conserving their use of cigarettes, because he wasn’t expecting his father to send him money until the following week. When the woman asks about when he will be paid, he replied “I get paid on the 21st, in two weeks.”

Lemoine then eerily exclaims at about the eight minute mark of the video, “I can’t even get the car I f**in want to get.” Aside from the aforementioned, the video mainly consists of the couple yelling at their pit bull to lay down, threatening to beat it and complaining about random happenings.

The video is dated February 11, just four days before Hartline and Day disappeared.

3. Hartline & Day Went Missing February 15 & a Report Was Made the Next Day

Day and Hartline were reported missing on February 16, however investigators believe they were killed the day before.

“This is a very sad situation and it’s unfortunate that two people lost their lives and that four others are facing life in prison over a 2011 Chevrolet Camaro,” Smith stated.

Heavy spoke with a friend of Lemoine’s fiancée.

“The last time she talked about him, he was in rehab. He was just getting out for drugs.”

Wheat added that he didn’t speak with Webre about the homicide because he “wasn’t sure if she even knew anything about it.”

5. They Are Being Held Without Bond

The alleged killers are awaiting a bond hearing set for March 9, a jail spokesperson told Heavy.