Every girl may not be queen to her husband, but she is always a princess to her father.. A daughter's first love, a son's first superhero. @matredho ➖ #visithuluselangor #rentasropeswing #outdoortothemax #rentas_adventures ➖ Btw, slot minggu depan available lagi. Call/whatsapp 0142650526 for more info!

Malaysian reality star Redha Rozlan has caused an online uproar after an Instagram video showed him bungee jumping with his 2-year-old daughter.

In the footage, which can be viewed above, the father is seen standing atop a bridge at Rentas Adventure in Kuala Kubu Bharu, Malaysia, while his daughter quite literally holds on for dear life.

Rozlan pats the little girl, named Mecca Mikaela, on the back as he is heard doing a countdown to the jump.

The two are then seen ripping backwards through the air off of the bridge into a valley nearly 200 feet below.

Rentas Adventures describes the jump as “an intense, undie staining, adrenaline stimulation activity achieved by launching yourself from the natural surrounding, above 60m over the bridge of Empangan Kuala Kubu Baru.”

“Every girl may not be queen to her husband, but she is always a princess to her father,” the company captioned the video.

This dickhead Redha Rozlan, a prominent Malaysian daredevil, took to Instagram on Monday to share footage of himself and his two-year-old daughter Mecca as they prepared to jump from the bridge in Kuala Kubu Baru, 50km north of Kuala Lumpur. Your dickhead and irresponsible. pic.twitter.com/zNSYW8JblU

According to Free Malaysia Today, a human rights lawyer said the father could be charged for allowing the little girl to participate in the risky activity, and said Rozlan could be prosecuted for “putting the child in a dangerous situation that may cause physical or emotional injury to them.”

“Yes, action can be taken under the Child Act,” attorney Andrew Khoo told the media outlet. “This clearly breached safety requirements, too. The company operating the rope spring jump was also negligent for not preventing the parent from having the child tag along.”

It should be noted that Mikaela was not wearing a protective helmet during the stunt, though her father was.

Rentas Adventures and Rozlan are being heavily scrutinized via social media, with many expressing anger and disbelief.

This dickhead Redha Rozlan, a prominent Malaysian daredevil, took to Instagram on Monday to share footage of himself and his two-year-old daughter Mecca as they prepared to jump from the bridge in Kuala Kubu Baru, 50km north of Kuala Lumpur. Your dickhead and irresponsible. pic.twitter.com/zNSYW8JblU

“Whip lash, shaken baby syndrome, lung collapse, emotional distress and so many other things can occur AFTER this selfish, ridiculous act, @djstacystylez replied to the Instagram video. Makes me so angry that this dad thought this was somehow ok. Sickening. Absolutly irresponsible, selfish, abusive and in no way right. Awful.”

“The world has truly lost it!,” @iamahmadrabah wrote. “In America we lock parents up if they leave the kids in the car alone. I can only imagine what we would do to this animal.”

Rozlan defended the outing and claimed the tot wanted to repeat the jump.

“Chill, guys. Don’t try with your kids if your kids [are] not ready for this,” he wrote.

While a vast majority attacked the man via social media, some took his side.

Instagram user @papapelto praised the man for teaching the girl to be “fearless,” writing:

Good for this father teaching his daughter to be fearless from such a young age. Realistically any amount of jerking would have been taken by the father only. So many crybabies today! Oh and for those complaining about a helmet. Question do you think for one second, god forbid, but in the event of a freak accident that a helmet would do anything?

“Uh…it’s sort of like a swing… except she was harnessed in so she couldn’t possibly fall off if she tried… and her dad was hugging her the whole time, @robtheseamonkey responded to the footage. “Looks like fun! What a great dad raising his kid to be fearless and have fun despite other people’s ridiculous, irrational fears.” 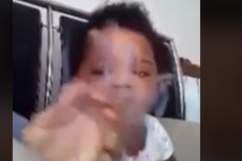